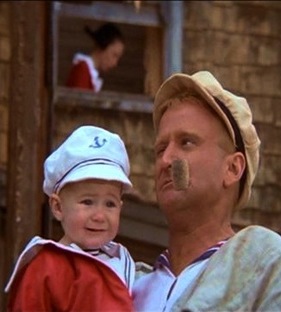 Strong to the finish


First published on this day (December 19) in 1919, the comic strip Thimble Theater included among its characters a one-eyed, anvil-armed sailor. In 1980, after starring in countless animated cartoon shorts, Popeye came to life in a big screen musical feature.

Wednesday, December 17, 1980.
POPEYE. Written by Jules Feiffer. Based on characters created by E.C. Segar. Music by Tom Pierso. Songs by Harry Nilsson. Directed by Robert Altman. Running time: 114 minutes. General entertainment. WELL, BLOW ME DOWN, I is impreskt. Who would have believed they could make a movin' pitcher out of Popeye?
Robert Altman, that's who. The innovative, unpredictable director of 1970's M*A*S* H  and Nashville (1975), Altman never doubted that he could bring the late E.C. Segar's Thimble Theater to life.
Now, I'm a believer. Popeye, the motion picture, is like no other film that I've seen, an utterly original, wonderfully whimsical and completely unexpected screen experience.
Altman's film is like a trip to Disneyland. Part dream, part memory, part live-action cartoon, it invites us to enter a fully realized fantasy world peopled by the characters from Segar's comic-strip universe.
As written by cartoonist and comics historian Jules (The Great Comic Book Heroes) Feiffer, it is the story of a one-eyed, anvil-armed sailor named Popeye (Robin Williams), an apparent "orphink," searching the seven seas for his long-lost father.
Putting in at Sweethaven, he finds himself a stranger in a strange land. The town (a remarkable feat of environmental set building) is run by a tyrannical Commodore, an unseen presence whose dreaded henchmen, the Taxman (Donald Moffat) and Bluto (Paul L. Smith), enforce his rule.
Popeye takes a room at the boarding house run by Cole Oyl (MacIntyre Dixon) and his wife Nana (Roberta Maxwell). There, the sailor man encounters Olive Oyl (Shelley Duvall, in a role she was born to play). The Oyls receive considerable tax relief because their gangling daughter is Bluto's betrothed.
In some doubt about the match herself, Olive steals off on the night of her engagement party. She runs into Popeye, and together they discover Swee'pea (Wesley Ivan Hurt, the 15-month-old son of actor John Hurt), an abandoned baby in a basket.
Perhaps the single most difficult task facing any entertainer is keeping the audience interested in what happens next. Segar's genius as a newspaper comic strip writer was that he kept his readers fascinated, and they, in turn, came back day after day to find out the next twist in the tale.
Between them, Feiffer and Altman recreate that fascination on the screen. The genius of their film is that it combines comic-strip conceits —characters arranged in tableaux; stylized body shapes; elastic movements – and animated cartoon conventions — musical numbers; aural humour; exaggerated, non-lethal violence — with an interesting plot that is advanced by all of these elements.
Although Dustin Hoffman and Lily Tomlin were originally announced for the key roles, it is hard to believe that anyone could have done a better job than Williams and Duvall. In a film that is essentially an exercise in imagination, their performances are as stylized as classic mime, while remaining as individual and eccentric as the characters they play.
Not everyone likes spinach — indeed,  an important element in Feiffer's script is the fact that Popeye loathes the stuff. Not everyone is charmed by Popeye as seen through the cameras of Robert Altman.
To be an innovator, though, one must risk failure. Film innovators face the additional trial of unfavourable reviews.
Altman's Popeye is not for filmgoers who want every movie to look like every other movie. It's designed to delight audiences looking for something completely different.
*    *    *
IN THE FLOOD OF STORIES published following the death of John Lennon [December 8, 1980], I don't recall anyone mentioning Robert Altman's 1975 masterpiece Nashville, the film that foresaw the possibility of a pop star as an assassin's target.
Following the film's release, Altman was asked why the killer — a clean-cut country-and-western music fan — shot the singer and not the  presidential candidate. He said that he wanted people to question senseless murder, not accept it.
The audience, sure that politician Hal David Walker was the intended victim, was shocked to see an apparently innocent, attractive performer gunned down instead. The idea was to shock people into thinking, into questioning, into asking "why?".
And damned if we didn't start thinking.
Right after we saw Nashville's final scene played out on a New York sidewalk.

Afterword: If surprise is at the heart of humour, then Robin Williams's screen career was the very definition of funny. After making an indelible mark on television comedy as the anarchic extraterrestrial Mork from Ork, he made his big screen breakthrough playing introverted comics icon Popeye. In 1982, he was back with something completely different, The World According to Garp, adapted from literary lion John Irving's surreal comic novel. The surprises just kept coming, including his Oscar-nominated turn as military DJ Adrian Cronauer in 1987's Good Morning, Vietnam; as the King of the Moon in Terry Gilliam's The Adventures of Baron Munchausen (1988); as compassionate physician Malcolm Sayer in Awakenings (1990); as the adult Peter Pan in Steven Spielberg's Hook  (1991); as the cross-dressing housekeeper in Mrs. Doubtfire (1993); as Osric in Ken Branagh's adaptation of Hamlet (1996); and the self-aware android Andrew in 1999's Bicentennial Man (1999). Although his best known cartoon role remains the big blue Genie in Aladdin (1992), Williams made his animated feature debut as Batty Koda in Ferngully: the Last Rainforest (1992). Often on location in the Great White North, he made three pictures in Toronto —  Good Will Hunting (1997), Death to Smoochy (2002) and Man of the Year (2006) — and one each in Montreal (Noel; 2004) — and Winnipeg (The Big White; 2005). He was particularly familiar with Vancouver, first visiting for 1995's Jumanji (1995), then returning for Insomnia (2002), The Final Cut (2004), RV (2006) and License to Wed (2007). Vancouver was also home base for his appearances as Teddy Roosevelt in Night at the Museum (2006), Night at the Museum: Battle of the Smithsonian (2009) and the series finale, released just today (December 19), Night at the Museum: Secret of the Tomb. Giving that last title unintended poignancy was Williams's final surprise, his death by suicide on August 11, 2014.