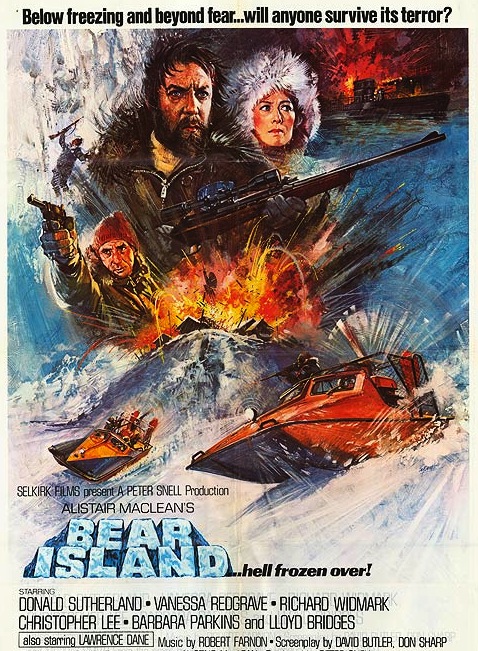 The theatrical release poster for 1979's Bear Island promises action and suspense in an arctic setting.

Subtlety is frozen out


Born on this day (April 19) in 1921 in Australia's island state of Tasmania, Don Sharp spent his entire directorial career in the British Isles. The one exception was an action epic that was the most expensive Canadian film ever made at the time of its release, 1979's Bear Island.

Sunday, June 8, 1980
BEAR ISLAND. Co-written by David Butler and Murray Smith. Based on the 1971 novel by Alistair MacLean. Music by Robert Farnon. Co-written and directed by Don Sharp. Running time: 103 minutes. Mature entertainment with the B.C. Classifier's warning: some violence. BEAR ISLAND, BASED ON THE novel by Alistair MacLean, has almost everything an adventure fan could want. There's sweep, spectacle, stunts and stars in a $10.2-million package.
Well, almost everything.
A vital something is missing, an ingredient necessary to any tale of high adventure, the vital spark that set off that most successful of MacLean screen adaptations, 1961's The Guns of Navarone.
There's no zest.
The name MacLean has become synonymous with high adventure. Readers and, by extension, filmgoers, enter his narratives expecting a full measure of keenly-felt exotica.
At his best, the author offers us larger-than-life experiences. Vicariously, we feel an invigorating tension and an outrageous amount of risk and reward.
The actual making of this Anglo-Canadian co-production was an adventure. To tell the tale of a United Nations expedition to a blizzard-swept island, the cast and crew travelled to Stewart, B.C. and the Alaska coast in the early winter.
They experienced privation and bitter cold, faced real dangers and brought back the footage. Filmgoers will see stuntmen running before an actual avalanche and watch a snow vehicle plunge off a glacier to fall thousands of metres.
The performers — a group that includes Donald Sutherland, Richard Widmark, Vanessa Redgrave, Lloyd Bridges, Christopher Lee, Barbara Parkins and Lawrence Dane — is as strong a collection as you'll find in any of the current all-star ensemble cast films. They are capably supported by such Canadian players as August Schellenberg, Patricia Collins, Bruce Greenwood, Michael J. Reynolds and Hagan Beggs, and a fine score by the Toronto-born composer Robert Farnon.
So what's wrong?
The trouble, I think, begins with the screenplay. In adapting MacLean's novel, writers David Butler and Murray Smith do not take into account the subtle but  significant difference between readers and filmgoers.
Let me illustrate by means of a tale.
Ever since Roger Moore took over the role of James Bond, the producers of the 007 series have said that Moore was their first choice all along. Moore was the sort of fellow that author Ian Fleming had in mind when he wrote the books.
Boy, were those guys lucky. If they had hired their first choice in 1962, there'd be no Bond series today. The franchise owes its direction and success to the Bond character created by Sean Connery.
The feisty Scot was unlike Fleming's coldly English Bond. And, by happy accident, he was the perfect Bond for moviegoers.
Fleming's Bond is a son of the British Establishment, what a non-U type would call an upper-class twit. Connery's Bond was a working-class hero.
No matter what the scripts said, Connery carried himself with up-from-the-ranks insouciance. He was self-reliant, self-confident and thoroughly contemptuous of both the people he served and the people he fought.
He shared his bad jokes, not with the other characters, but with the audience.
In Bear Island, our hero is Frank Lansing (Sutherland), an American marine biologist. We know that Sutherland is capable of the proper high spirits because we saw him display plenty of them playing opposite Connery in last year's The Great Train Robbery [1979].
Here, though, he's playing a character who is obsessed rather than inspired. Lansing is a cold, secretive and rather resentful show-off. In the opening sequence he comes a-cropper by attempting to board the research ship in an overly spectacular way.
Lansing is positively churlish to Judith Rubin (Parkins), an old girlfriend. To relieve tension, he gets into fist fights. Though he delivers his dialogue in what seems to be a parody of John Wayne, Lansing is not likeable.
Let's go back for a moment to the idea of high adventure. In The Guns of Navarone, it wasn't necessary to do much scene setting.
A war story, Guns introduced us to men on a mission behind enemy lines, desperately searching for the traitor in their midst. You knew it wasn't going to be Gregory Peck.
You knew who to cheer for. And cheer we did during Guns, The Wind and the Lion, The Man Who Would Be King (both 1975) and Richard Lester's Three Musketeers (1973, 1974). The urge to cheer is what made it an adventure.
Bear Island, perhaps in an attempt to be faithful to the spirit of the book, is deliberately ambiguous about its characters. Everybody is sinister, from Otto Gerran (Widmark), an aging Norwegian who also speaks German, to the Polish meteorologist Lechinski (Lee), who takes long nocturnal walks.
And, wouldn't you just know it? Bear Island was once a German U-boat base. Though the war has been over for 35 years, the dark shadow of the twisted cross falls over the landscape.
I have no objection to Nazi villains. What I missed, though, was the kind of sparkle that director Brian Hutton brought to MacLean's Where Eagles Dare (1968).
Hutton, like Lester, John Huston and John Milius, knew how to make a movie that worked on several levels. His picture was terrific as a flat-out adventure. It also worked as subtle spoof.
In directing Bear Island, Don Sharp has taken his material very seriously. Because he omits the leaven of humour, the mix fails to rise.
Going to an adventure movie is like a ride on a roller-coaster. I want to laugh, to cheer and, perhaps, shed a small tear. I want the total escape that Bear Island fails to provide.

Afterword: Released in the U.K. with a running time of 118 minutes, Bear Island reached Vancouver a somewhat leaner 103 minutes. By that time, it was clear that Peter Snell, the film's Calgary-born, University of B.C.-educated producer, had something less than a hit on his hands. How much less was noted by chroniclers of filmic failure, Harry and Michael Medved, in their 1984 book The Hollywood Hall of Shame. "Audiences found it unbearable," they wrote (italics in the original), "and it lost virtually every penny of its $12 million cost." It also dashed whatever hopes director Don Sharp had of breaking out with a major international success. An Australian-born actor, Sharp relocated to Britain in 1949, where he wrote, produced and acted in the 1950 drama Ha'penny Breeze. He added director to his resume with the 1955 thriller The Stolen Airliner. In the years before Bear Island, he made his living directing genre features, most notably for Britain's stylish horror house, Hammer Films. In the mid-1960s, Sharp worked with the flamboyant producer Harry Allan Towers, directing a pair of pulp-based "yellow peril" features — The Face of Fu Manchu (1965) and The Brides of Fu Manchu (1966), both with Christopher Lee — as well as a superspy spoof (1966's Our Man in Marrakesh) and a sci-fi comedy, Jules Verne's Rocket to the Moon (1967). Bear Island was his 24th theatrical feature. With the exception of the low-budget thriller What Waits Below (1985), he spent the last decade of his directorial career working in British TV. Sharp died in 2011 at the age of 90.