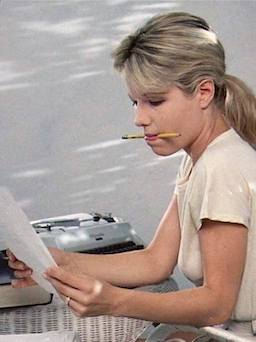 Jerilee Randall (Pia Zadora) is determined to make it as a Hollywood screenwriter in director Peter Sasdy’s 1983 tale of film industry ambition The Lonely Lady.

Success with no shame


Wanting it in the worst way


According to his 1997 obituary in The Independent, a London-based newspaper, “Harold Robbins was indisputedly the most popular writer in the world, and his books — not one of which has ever been out of print — are said to have sold, in 42 countries, three-quarters of a billion copies. His most popular, The Carpetbaggers (1961), has sold 30 million copies, making it, apparently, the fourth most read book in history.” Born on this day (May 21) in 1916, Robbins enjoyed fame as “the Rembrandt of the trashy novel,” “the Onassis of supermarket literature,” “the dirty old man of American letters” and “a tabloid Boswell.” The online Britannica credits him “with popularizing a prurient style of mass-market fiction that traded on the public appetite for tales of profligate Hollywood stars and glamorous criminals.” At the height of his fame, he assured interviewers “I'm the world's best writer in basic English. Everybody understands what I write — except maybe the critics." Fame, alas, is fleeting. His centenary in 2016 went unmarked. There were no celebrations, no academic conferences, no festivals of the 10 feature films based on his novels. Today’s Reeling Back package adds three of those pictures to the archive (with links to them all following the Afterword to this posting). Included is director Peter Sasdy’s tale of film industry ambition based on a Robbins novel, 1983’s The Lonely Lady.

THE LONELY LADY. Written by John Kershaw and Shawn Randall. Based on the 1976 novel by Harold Robbins. Music by Charles Calello. Directed by Peter Sasdy. Running time: 92 minutes. Restricted entertainment with the B.C. Classifier's warning: some nudity and suggestive scenes. IN THE WORLD OF The Lonely Lady, women have no shame. When respected Hollywood screenwriter Walter Thornton (Lloyd Bochner) walks into a restaurant, an actress whose name he can’t even remember (Colette Hiller) practically begs him for a job.
The middle-aged Oscar winner's 19-year-old wife is appalled. "Walter," says the ingenuous Jerilee Randall Thornton (Pia Zadora), "who’d want to be an actress?"
“In this business," he replies sagely, "you can’t afford self-respect." As if to prove the point, director Peter Sasdy cuts directly to a bedroom scene, where his camera observes poor old Walter failing in an attempt to sexually satisfy his still-teenaged spouse.
A movie without shame, The Lonely Lady wears its deliberate trashiness with unpretentious pride. Based on one of Harold Robbins's Hollywood-baiting novels, it practically dares one to dump on it.
Sasdy, who made the picture in Italy and England, shows no shame. Hungarian-born, he’s probably aware that his best works were the erotically-charged vampire films — remember 1971's Countess Dracula? — he did years ago for Britain's Hammer horror factory.
Here, he sets the tone early, cramming the film's first few minutes full of obvious phallic symbolism. Just in case you miss all of the hot dogs and crotch-level beer bottles, Jerilee will finger her high school composition trophy, and look suitably shocked when leering young blood Joe Heron (Ray Liotta) tells her that it looks like a penis.
Jerilee wants to be a writer. In her struggle to the top, she will endure a violent rape attempt, a worn-out older husband, an abortion following an affair with a married man, lesbian encounters and a mental breakdown.
Can she survive with her integrity intact? Will she write a screenplay good enough to win the film community’s highest honour? What will she say at the awards ceremony?
If you don't already know the answer to all of the above questions, then you’re probably not old enough to get in to see this Restricted-admittance melodrama.
Made as a star vehicle for the chubby-cheeked Zadora, it is a film that has little to recommend it. Unlike the character she so ineptly portrays, the diminutive blonde singer really wants to be an actress in the worst way.
The Lonely Lady is the worst way.

Afterword: For the most part, critics were dismissive of the big, bold novelists. Their influence on the popular culture, well, that was another matter. In the 1986 sci-fi feature Star Trek IV: The Voyage Home, the Enterprise crew time-travels back to late 20th-century San Francisco. During one delightfully comedic scene, Admiral Kirk explains to Captain Spock the prevalence of profanity in everyday speech. “That's simply the way they talk here. Nobody pays attention to you unless you swear every other word. You'll find it in all the literature of the period.”
“For example?” Spock asks.
“Oh, the collected works of Jacqueline Susann. The novels of Harold Robbins . . .”
“Ah,” says Spock, recognizing the names. “The Giants.”
Of course, the screenwriters are joking. But the jibe would have fallen flat if the audience wasn’t familiar with the names Jacqueline Susann and Harold Robbins. As the “about the author” page in the 2008 edition of The Carpetbaggers tells us, Robbins “was as much a part of the sexual and social revolution as the pill, Playboy and pot.”
Susann is most famous for her debut novel, 1966's The Valley of the Dolls. The story of three young women whose lives in show business closely resemble those of some actual celebrities, it achieved Robbins-like sales figures. Predictably, Time magazine labelled it the “Dirty Book of the Month," and director Mark Robson’s 1967 film adaptation was one of its year's top-grossing pictures. Here’s the good part: Susann, a stage and television actress, credits her inspiration to Robbins.
Here’s the better part: Robbins’s novel The Lonely Lady was inspired by the life of Jacqueline Susann. By the mid-1970s, the world of the big, bold novelists was so deeply rooted in American popular culture that its “Giants” could feed upon one another.