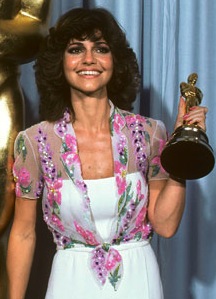 
&quotThey all said you'll never do it"


Following a preview screening of 1979's Norma Rae, Sally Field sat down to chat about the picture, her career and the campaign being mounted to win her a best actress Oscar nomination.

Friday, February 23, 1979.
NEW YORK — The ink was barely dry on the news stories announcing the 1978 Oscar nominees. Yet here, at a press conference promoting Martin Rltt's new film Norma Rae, the 20th Century-Fox publicists were confidently predicting that his star, Sally Field, would be among the 1979 contenders.
"They're using the exact same plan as An Unmarried Woman [a 1978 Fox release]," Field said. "It will play all year, and they will screen it for everyone they can get, from the Girl Scouts to the gynecologists convention."
Field's performance in the picture, a drama, is outstanding. The Fox strategy is fascinating. So, what do the assembled reporters want to talk about?
"Sally, if you and Burt are really in love, why don't you get married?"
"Sally, is Burt interested in doing any serious drama?"
''Sally, what does Burt think about. . . ?"
The sunshine smile slowly fades. She becomes self-conscious about the amount of cleavage her tie-front top reveals and adjusts it. She tries to be responsive and polite, and not look too annoyed.
Reporters find it easy — too easy — to type Sally Field. Six years ago she was "the girl next door," "a charmer," "cute."
She was also fed up.
Born Nov. 6, 1946, in Pasadena, Calif., she made her professional acting debut in a 1965 TV series, Gidget. (The 1959 screen version starred Sandra Dee.) Field went on to star in television's The Flying Nun (1967-70) and The Girl With Something Extra (1973-74).
"I never got any movie offers at all," she recalls. "The features people didn't think I had any ability." She decided to take three years out, time to think, to study (she enrolled in The Actors Studio) and to change her image.
"They all said 'you'll never do it, Field.' So I fired them all. I fired my agent and my business manager, left my husband and sold my house."
In 1976, she accepted the role of a slatternly Southern secretary in a film called Stay Hungry, a part that came complete with some crude-talking dialogue and a semi-nude scene. A self-consciously arty picture, it had only one good thing in it.
Sally Field.
She was on her way and on her own. In Sybil (1976), a made-for-TV mini-series, she played a schizophrenic with a multiple-personality problem, and won an acting Emmy.
Then came Smokey and the Bandit, a light-hearted gear jammer and one of the top grossing films of 1977. Her co-star was Burt Reynolds, and damned if you couldn't see them falling in love right up there on the big theatre screen.
She was solid in Heroes (1977), a tragl-comedy that starred Henry Winkler, but two more films with Reynolds (1978's Hooper and The End)  firmly established her as "Burt's lady." Another stereotype.
In Norma Rae, she strikes out on her own again. Her character is far from "cute."
Norma Rae Webster is a mill worker in the rural American South. She's worn down and nearly worn out. She has two kids, no husband and puts out for just about anyone who asks because she has no good reason to say no.
During the film she becomes involved with two men. One gives her a cause (trade unionism), the other, his love. Norma Rae responds by growing in strength and self-awareness. "It's Sally's movie," her co-star Beau Bridges told me.
On that point, audiences are likely to agree. Academy Award recognition is another matter. There are a lot of pictures and a lot of performances yet to be seen this year.
An Oscar nomination — and Field certainly deserves one — would forever end her "cuteness" problem. It would also go a long way towards putting that "Burt's lady" business in its proper perspective.
"You have to own your own fate," Field says. "You can't put it in someone else's hands and say 'let it happen.'
"One of the reasons that I have the utmost respect for Jane Fonda is that she says 'do what men do. Go out and look for your own projects'." Like Fonda, Sally Field is determined to be her own woman and her own star.

The above is a restored version of a Vancouver Express interview by Michael Walsh originally published in 1979. For additional information on this archived material, please visit my FAQ.

Afterword: A career moment Ms Field neglected to mention was her feature film debut in the 1967 western The Way West. The posters for the picture actually featured the line "Introducing Sally Field as "Mercy," and the soundtrack included an embarrassingly sappy ballad singing the praises of her character, "Mercy McBee." It was another nine years before she got another big screen feature role (Stay Hungry, in which the new face was that of Arnold Schwarzenegger). Following her best-actress Oscar win for Norma Rae, she made two more features with Martin Ritt, 1981's Back Roads and Murphy's Romance (1985). She collected her second Oscar for playing a Depression-era farm widow in director Robert Benton's Places in the Heart (1984). More recently, comic-book fans are getting to know her as Aunt May in The Amazing Spider-Man series reboot (2012). Stephen Spielberg again showed us the serious Sally in his 2012 Oscar magnet Lincoln, in which her supporting role as Mary Todd Lincoln was good for a third career nomination.