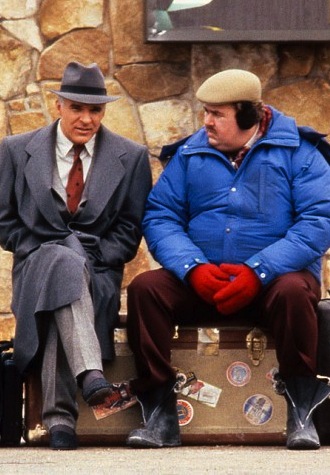 Neal Page (Steve Martin) gives no thanks at all for Del Griffith (John Candy), his travelling companion in Planes, Trains and Automobiles.


When getting there is no fun at all


Today is Thanksgiving [Nov. 28]. Again. Canadians not only get to have two official languages, but we also have the option of celebrating Thanksgiving twice, once in mid-October for ourselves, and once more in late November to show our deep affection for our American neighbours. Sad to say, Thanksgiving appears to be the most troubled holiday on the U.S. calendar. Despite its importance in American tradition, its modern version is squeezed on either side by the spreading bulk of the Hallowe'en and Christmas seasons. Once the year's essential family celebration, it's in danger of being reduced to the eve of the nationwide retail riot known as Black Friday. As if things weren't bad enough, last week U.S. grocery shoppers were warned of a nation-wide turkey shortage. I wish I could say that the beleaguered day had friends in the film community. The truth is, Thanksgiving is mostly ignored in the movies. While Hallowe'en has its own franchise (nine pictures and counting) and Christmas is "a tradition," cinema pays lip service to Thanksgiving. That's what happens in Planes, Trains and Automobiles, a comedy that focuses on the pain of getting home for the holiday.

November 26, 1987
PLANES,TRAINS AND AUTOMOBILES. Music by Ira Newborn. Written, produced and directed by John Hughes. Running time: 92  minutes. Mature entertainment with the B.C. Classifier's warning: some very coarse and suggestive language. NEAL PAGE (STEVE MARTIN) has been under a lot of pressure lately. As he inches forward in a St. Louis airport car-rental counter line, we can see the stress building. He is supposed to be at home celebrating Thanksgiving with his wife and family in Chicago. A successful advertising executive, he was booked on a 6 p.m. flight out of New York just yesterday.
Things went wrong. First, there was that sales meeting that  went on and on and on. Then, there was an unsuccessful scramble for a cab.
It's as if his life had suddenly become a demonstration of Murphy's Law.