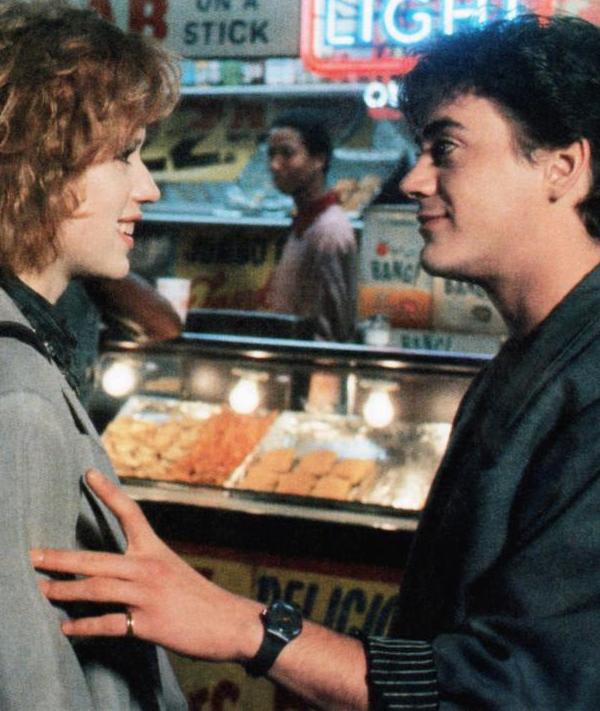 The end of the line


Scoring a matter of playing the odds


Though he eventually achieved superstardom as a superhero, Iron Man Robert Downey, Jr. started out in the 1980s as a Brat Pack supporting player. Born on this day (April 4) in 1965, he first received star billing in the title role of writer-director James Toback’s 1987 The Pick-up Artist.

Tuesday, December 22, 1987.
THE PICK-UP ARTIST. Music by Georges Delerue. Written and directed by James Toback. Running time: 81 minutes. Rated Mature with the B.C. Classifier’s warning: occasional coarse and suggestive language. JACK JERICHO (ROBERT DOWNEY, JR.) plays the odds. A downtown Don Juan, he knows that his chances of scoring are directly proportional to the number of girls that he propositions.
To improve his odds, he is attentive to personal hygiene and works hard to improve his line. A third-grade teacher with a few first-rate come-ons, Jericho is The Pick-Up Artist.
Involvement does not figure in his calculations. Indeed, he's surprised by his own strong attraction to Randy Jensen (Molly Ringwald), a girl with “the face of a Botticelli in the body of a Degas.”
Here, though, the tables are turned. Though post-coital courtships are not his style, Jack finds himself chasing a woman after the act, bleating out his emotional distress.
"What do you want from me?" he begs with practiced overstatement. “My blood? My heart? My soul?”
"Your absence," she counters, unmoved.
Writer-director James Toback is fascinated by the odds. He broke into the film business 13 years ago [1974] as a writer, providing director Karl Reisz with the screenplay for a film called The Gambler.
He is even more fascinated by the gambling milieu, that dangerous twilight world populated by mob bosses, hustlers and hangers-on. Fingers (1978), his debut as a feature film director, had a Mafia family setting.
More consistent than coherent, Toback makes movies that incline to the messy and diffuse. His 1982 wallow in South American business corruption (Love and Money) and 1983 examination of international terrorism (Exposed) were ponderous, little-seen bores.
Given his record, The Pick-up Artist is a pleasant surprise. A romantic comedy with a tender disposition and a quirky charm, it has a lightness and purposeful pacing quite out of character for a darkly serious director.
Odds are the picture's been restructured in the cutting room. The shortest major studio release in recent memory, it has a running time of just 81 minutes.
Credited with trimming it into shape are two editors (Angelo Corrao and the Oscar-winning David Bretherton),  four assistant editors and an apprentice.
My guess is that they dispensed with a lot of low-life scenery, including an Atlantic City casino, and seriously reduced a seamy  subplot involving Randy's debt-ridden, whisky-soaked father Flash (Dennis Hopper, very much in control and a delight to watch).
They may well have saved the picture from art-house obscurity. By concentrating on the relationship between the smitten Jack and the preoccupied, self-possessed Randy, they give the story an effective, mass-audience dimension.

Afterword: Although I’ve yet to see any evidence to support my speculation that The Pick-up Artist was severely cut and ultimately shaped by its editors, I still think the odds favour it. Among the stories that have been told since its release (and financial failure) are those that say that writer James Toback based the Jack Jericho character on himself, and that he wrote the role with his friend, the notorious Hollywood womanizer Warren Beatty, in mind.
What we do know its that the then-49-year-old Beatty turned the part down, but acted as the film’s executive producer. In a 2010 interview with The Atlantic magazine, actress Molly Ringwald said that “ Warren is the one who pretty much directed me.”
Was The Pick-up Artist the 42-year-old Toback’s own story? In a 1988 interview with Rolling Stone, Robert Downey, Jr. said “I didn't have to practice picking up girls. Jim Toback was directing; all I had to do was watch him between takes. He was picking up girls.” Thirty years ago, Downey recognized that “of course it's a sexually irresponsible film.”
Which brings us to Oct. 2017, and a headline in the L.A. Times newspaper: "38 women have come forward to accuse director James Toback of sexual harassment." Coming just 17 days after the New York Times broke its story about serial sexual harasser Harvey Weinstein, it prompted many readers to ask “James who?” As it turned out, Toback’s career peaked with his 1992 Oscar nomination (for the screenplay of Bugsy, a role played by Warren Beatty), and he's hardly been heard from since. Actor Downey, by contrast, was becoming noticed. In 1993, he was an Oscar nominee for playing the title role in Richard Attenborough’s Chaplin. Robert Downey, Jr. turns 53 today (April 4).