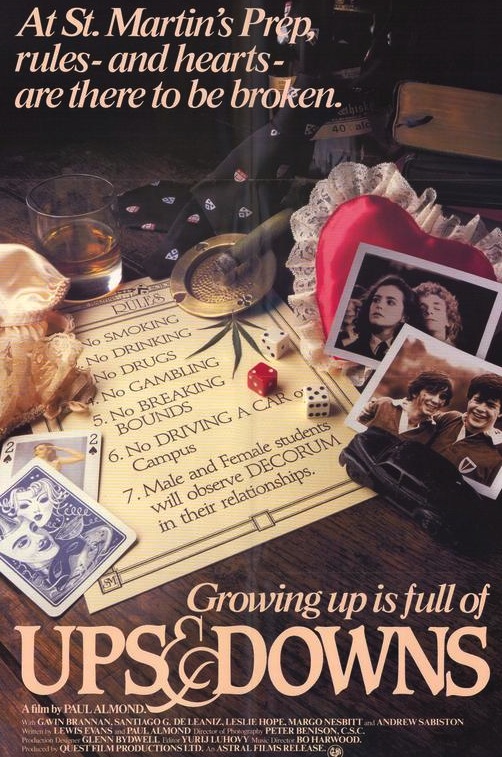 
Approval no guarantee of authenticity


Paul Almond, born on this day (April 26) in 1931, was a Canadian television and motion-picture pioneer. Best known for the trilogy of features he wrote and directed for his then-wife Geneviève Bujold, he once paid a working visit to B.C. to film the 1981 teen comedy Ups and Downs.

Sunday, November 27, 1983
UPS AND DOWNS. Co~written by Lewis Evans. Music written and performed by Bo Harwood, Patricia Cullen and Bobbi Permanent. Co-written, produced and directed by Paul Almond. Running time: 93 minutes. Mature entertainment with the B.C. Classifier's warning: some very coarse language;  occasional swearing. LORD KNOWS, I THINK the man is honest, talented and sincere. A decade ago, I included writer/director Paul Almond's mystical feature Journey on my list of the 10 best films shown here in 1973.
Wednesday afternoon, Almond introduced his newest feature, Ups and Downs, to an audience of teachers and students at the Park Theatre. It has been approved, he said, by seven local school boards as an addendum to their curricula.
Shot at St. Michael's University School on Vancouver Island, the picture weaves together the stories of several classmates during the fall term at a fictional private high school.
Because I believe in the Montreal-born Almond's honesty, I accept it when he says that he was interested in making a "timeless, genuine" exploration of life in a boarding school, rather than an exploitation film to cash in on a current cinema trend.
Since his setting is a co-ed institution, story situations involve both boys and girls.
In the men's house, we're introduced to Chip (Andrew Sabiston) and Drifty (Gavin Brennan), roomies who bet their housemaster, Arthur "Sherlock" Holmes (Colin Skinner), that they can break all of the school's "commandments" without being caught.
In the women's house, we meet roommates Sam (Margo Nesbitt) and Mouse (Alison Kemble). A mathematics champion, Mouse is attempting to divert some of her intensity into a relationship with Santi (Santiago Garcia De Leániz), the school's hot-tempered soccer star, while Sam is desperately fighting a weight problem in the hope of catching the offstage eye of Derek (Eric Angus), her co-star in the school musical.
Stock villainy is provided by Penel (Leslie Hope), who heaps on the bitchiness. Perpetually distraught is Emmie (Sandy Gauthier), the sickly misfit who suffers torment from the other girls in the dormitory.
The kids, played by a cast of fresh-faced newcomers, are all right. Almond, to his credit, takes great pains to showcase their talent.
The problem is a screenplay that gives the enterprise a formalized, institutional feeling, as if each incident had been set up for dissection by discussion groups.
Well-behaved and worthwhile, Ups and Downs abounds in the "enriching" qualities much beloved by Almond's former employers at the CBC television network. The surprise is how like a contrived sex-exploiting teen movie a studiously wholesome teen movie really is.
The goody-good, like the baddy-bad, lack authentic feelings and life spark. Both kinds of movies suffer from terminal dullness.
This time out, Almond has produced a picture for approval rather than appeal. His Ups and Downs is less a movie than a teaching aid.

Afterword: Paul Almond's Canadian roots run deep. Born in Montreal, he liked to tell the story of his great-grandfather, a British sailor who'd fought at Trafalgar and later jumped ship to start a new life on the Gaspé Peninsula among the English settlers who'd fled the American colonies during the U.S, revolutionary war. Internationally, Almond is best known as the Granada Television writer who conceived and directed 1964's Seven Up!, a broadcast documentary that evolved into a seven-picture series. Canadian film historians recall his work at the CBC, including a 1961 made-for-TV adaptation of Shakespeare's Macbeth, with Sean Connery in the title role. In 1967, he married actress Geneviève Bujold, for whom he wrote starring roles in his feature films Isabel (1968), Act of the Heart (1970) and Journey (1972). It's been reported that, through it all,  Almond considered himself a writer rather than a filmmaker. He became a novelist in his 60s. His eight-volume Alford Saga, published between 2010 and 2015, covers 200 years of Quebec and Canadian history. Inspired, perhaps, by Canadian author Mazo de la Roche's best-selling Jalna series (1927-1958), Almond chronicles a family history not unlike his own. The first novel, 2010's The Deserter, recounts the adventures of a British sailor who jumps ship off Gaspé. The final volume, 2015's The Inheritor, is a roman a clef in which a CBC producer-director named Paul Alford works with real-life celebrities such as Sean Connery, Geneviève Bujold, William Shatner and Donald Sutherland. Paul Almond died on April 9, 2015, just two days before publication of The Inheritor, and 17 days short of his 84th birthday.
Of the 10 teen players who made their motion-picture debuts in Ups and Downs, six never appeared in another film. Bobbi Permanent, who won a best song Genie award for the picture's title tune, continued in the film business as a composer and (as Bobby Pollard) works as a set dresser and prop man. After returning home to Madrid, Spanish-born Santiago Garcia De Leániz made his living as a feature film and television producer. Gavin Brennan managed one further film role in 1985, while Steve Wright earned his pilot's licence and has appeared on screen flying helicopters on TV shows and in the movies ever since. Andrew Sabiston went on to a career as a television actor and voice performer. The major movie success story, though, is Leslie Hope, who played bad girl Penel. She currently has some 100 television and film acting credits, including a starring role in Oliver Stone's 1988 feature Talk Radio, and a full season playing Jack Bauer's wife Teri on the Fox Nework's 24 (2002). Since 2008, she has added writing and directing to an already impressive resume.