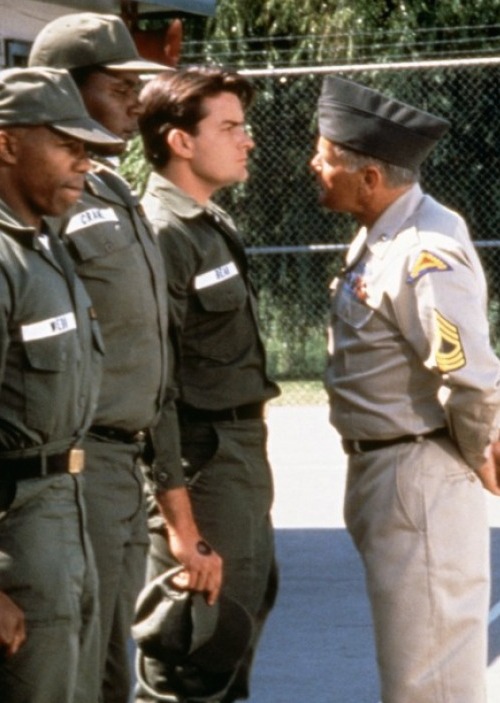 Training in the basics

CADENCE. Written by Dennis Shryack. Based on the 1968 novel Count a Lonely Cadence by Gordon Weaver. Music by Georges Delerue. Directed by Martin Sheen. Running time: 94 minutes. Rated Mature with the B.C. Classifier’s warning: occasional coarse language. FOR ACTOR MARTIN SHEEN, the Vietnam war was a formative experience. Under Francis Ford Coppola's direction, he journeyed into the heart of darkness as the star of the Oscar-nominated Apocalypse Now (1979).
For Sheen's son Charlie, Vietnam served much the same function. For Oliver Stone, he retraced his father's footsteps as the star of the Oscar-winning Platoon (1986).
Not unexpectedly, Vietnam looms in the background of Cadence, the elder Sheen's directorial debut film. A conscience-driven military drama, it's set in 1965, the year the U.S. committed itself to the war in Southeast Asia.
The setting is Camp Berenfeld, the West German "home of the 902nd Infantry." Attempting to run away from home is recent orphan Franklin Fairchild Bean (Charlie Sheen), a rebellious pfc.
For his sins, he's placed in the care of Sgt. Otis McKinney (Martin Sheen, who stepped in to replace an ailing Gary Busey). The hard-nosed careerist in charge of the base stockade, McKinney lives to rehabilitate wayward farmboys.
He's less concerned for the welfare of his brig's more or less permanent residents, a group of sullen, urban blacks. McKinney knows that the Montana-born Bean is unlikely to find common cause with Cpl. Roosevelt Stokes (Larry Fishburne), or any of his four-man "soul patrol."
An activist committed to the cause of peace and social reform, Martin Sheen found a metaphor for many of his personal beliefs in Gordon Weaver's 1968 novel Count a Lonely Cadence. As written for the screen by Dennis Shryack, it can be viewed as a heartfelt political statement.
Like many an artist before him, Sheen uses the army as a microcosm of American society. The stockade, like the inner cities, both contains and confines a largely non-white underclass.
Bean, an alienated young man full of undirected anger, finds that he does indeed have much in common with his fellow inmates.
"You're a bully," he tells the bigoted McKinney, "and I hate everything you stand for."
The system's ploy, director Sheen suggests, is to pit po' whites against even poorer blacks, thus maintaining the status quo for society's power brokers. Like the windmill on the camp's prison farm, American democracy has broken down.
Since this is a teaching tale, Bean is portrayed as a man with the inner resources to recognize his condition and change his fate. The moment he spots the farm’s Wind Machine/Rig #35, he realizes that "I could fix that."
But not alone.
Repairing a machine that will bring benefit to all requires co-operation among all the prisoners, black and white. Put another way, the poor folk have to set their own agenda.
And, since the established authorities can't have that, the dramatic crunch comes when a disapproving, increasingly unbalanced McKinney declares the partially restored windmill "off limits" to his charges.
As is often the case with message movies, Cadence works rather better as metaphor than as drama. Though all concerned make thoroughly professional efforts, the principals are more effective as symbols than as characters.
Worthy and even worthwhile, Sheen's feature does more to enhance his reputation as a humanitarian than as an entertainer.

Afterword: Not mentioned in the above review was the presence of Martin Sheen’s youngest son in the Cadence cast. Ramon Estévez, who is two years younger than his brother Charlie, plays Pfc. Gerald Gessner, Sgt. McKinney’s right-hand man in the enforcement of discipline at Camp Berenfeld. The brothers' surnames differ because of a choice made by their father. As an aspiring actor in 1950s New York, the Ohio-born Ramón Antonio Gerardo Estévez had better luck finding jobs as Martin Sheen. When Carlos Irwin Estévez decided to follow  his dad into show business, he did it as Charlie Sheen. By contrast, Ramon stayed with his birth name for his Cadence credit.
Also not mentioned was the fact that Cadence was shot on location in south-central British Columbia, with Kamloops and Ashcroft standing in for rural West Germany. Brought out of retirement to play Camp Berenfeld was Canadian Forces Station Kamloops, a cold-war Pinetree Line radar base finally closed down in 1988. Put to various government uses over the years, the land was returned to the Tk’emlups Indian Band, from whom it had been expropriated in 1956. It became part of Kamloops Indian Reserve No. 1 in 2012.