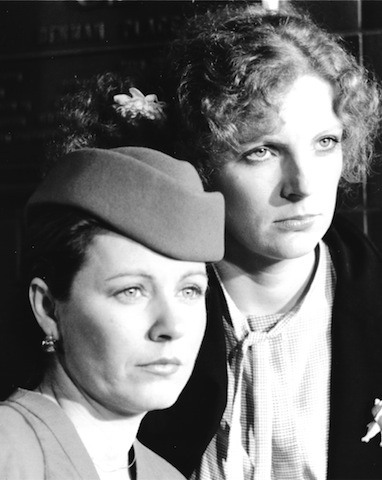 
Same-sex parenthood was still a touchy topic for Hollywood when Patty Duke came to Vancouver to make a film about a lesbian with maternal urges. Born on this day (December 14) in 1946, Duke starred in pioneering director Claude Jutra's 1982 feature By Design.

Tuesday, January 25, 1983.
BY DESIGN. Co-written by Joey Wiesenfeld and David Eames. Music by Chico Hamliton. Co-written and directed by Claude Jutra. Running time: 88 minutes. Restricted entertainment with the B.C. Classifier's warning:  some nudity and suggestive scenes. IMAGINE, IF YOU WILL, two ladies sharing. Independent and self-reliant, Helen Hunter (Patty Duke Astin) and Angle Alavson (Sara Botsford) are partners in business, after hours, and in bed.
Now imagine that one of the partners is beginning to have maternal longings. lt's not that she wants to change anything in her lifestyle, and she certainly has no desire for a man. What Helen wants is a baby.
The best thing about By Design is the idea. Definitely an original, it holds out the promise of something new and non-formula in movie entertainment.
The best thing in By Design is a brief, finely-wrought scene in a lesbian nightclub called Sister Moon. Nothing much happens — Helen and Angie enter, cross the room and dance together — but there is a feeling of honesty and authenticity in these few moments that is noticeably missing from the rest of the picture.
As directed by Claude Jutra, the ideas generally fail to connect with the potential. His detached, often distracted style is unsuited to romantic comedy. In common with many European directors, he lacks the warmth and the light touch necessary to make me laugh at such emotionally charged matters.
In practical terms, this means that he sets down his central couple in a world brimming over with unappealing grotesques. While Astin and Botsford work hard to create restrained, credible characters, they are forced to interact with a selection of overblown oddballs.
Because Angie really loves Helen — their affection is almost palpable in the Sister Moon scene — she is willing to add a baby to their family. After rejecting the sperm bank and being rejected by an adoption agency, they settle on an impregnation strategy involving a one-night stand.
Helen decides that the male to be so favoured will be Terry (Saul Rubinek), the photographer that they use in their fashion business. The Terry character embodies much of what's wrong with Jutra's movie.
Terry is neither bright, witty nor interesting. The only person in the picture who doesn't understand the nature of Helen and Angie's relationship, his idea of a big joke is grabbing a fashion model's pantied pudendum.
A sleazy little dolt, Terry lives in an apartment as empty as his head. Its only distinctive feature is a wall covered with life-sized studies of the female breast. Needless to say, any humour involving this cretin is forced and unpleasant.
Photographed in and around Vancouver in late 1980, By Design set out to be sophisticated adult comedy.  Like Jutra's previous English-language feature release, 1981's Surfacing, it ends up being a misbegotten mess.

Afterword: Positive depictions of lesbian love were rare to nonexistent in English-language movies prior to 1980. A character identified as such was invariably required to die tragically (Shirley MacLaine's character in 1961's The Children's Hour; Sandy Dennis in 1968's The Fox), indulge in grotesque villainy (Lotte Lenya in 1963's From Russia with Love) or be a vampire (Catherine Deneuve in 1980's The Hunger). Largely forgotten now, Claude Jutra's 1982 release By Design was on the cutting edge of American cinema's shift in its attitude towards female homosexuality. For the most part, film historians credit such subsequent features as Robert Towne's Personal Best (1982), John Sayles's' Lianna (1982), and Donna Deitch's Desert Hearts (1985) as the trend setters.
In 1980, Patty Duke might have been described as a fallen star. Remembered for her achievements as a child actress, she played the demanding part of Helen Keller more than 700 times during the original Broadway run of The Miracle Worker (1959-1961). At 16, she won an Oscar for reprising the role in director Arthur Penn's 1962 movie adaptation. (In 1980, she won an Emmy for playing Anne Sullivan, Helen Keller's tutor and the title character in Paul Aaron's TV movie version of The Miracle Worker.) At 17, she was the star of ABC-TV's The Patty Duke Show (1963-1966), a family comedy in which she played lookalike cousins Patty and Cathy Lane. A troubled teen in real life, Duke attempted the transition to adult roles in Mark Robson's 1967 screen adaptation of Jacqueline Susann's trashy Hollywood novel Valley of the Dolls. Duke's overwrought performance as a drug-addicted starlet shocked her television fans and pretty much trashed her feature film career.
In 1982, the year of By Design's release, Patty Duke was diagnosed with bipolar disorder, and that knowledge brought many of the issues she was dealing with into focus. Since then, she has paired her acting career with mental-health advocacy, dealing with the subject in an autobiography (1988's Call Me Anna, written with Kenneth Turan) and the 1997 how-to book Brilliant Madness: Living with Manic Depressive Illness, a collaboration with medical reporter Gloria Hochman. Among her post-diagnosis credits was the single-season ABC-TV series Hail to the Chief (1985), in which she starred as Julia Mansfield, first woman elected president of the United States.
By Design was made during her second working visit to B.C. Earlier in 1980, she was in Vancouver to co-star with William Shatner in a TV feature, The Babysitter (1980), a domestic drama directed by Peter Medak. Among her nearly 70 TV movie appearances are such Vancouver-made titles as Always Remember I Love You (1990), A Killer Among Friends (1992), Family of Strangers (1993), When the Vow Breaks (1995), Miracle on the Mountain: The Kincaid Family Story (2000) and Love Lessons (2000). Credited as Patty Duke Astin during her 12-year marriage to actor John Astin (1973-1985), Patty Duke celebrates her 69th birthday today (December 14).