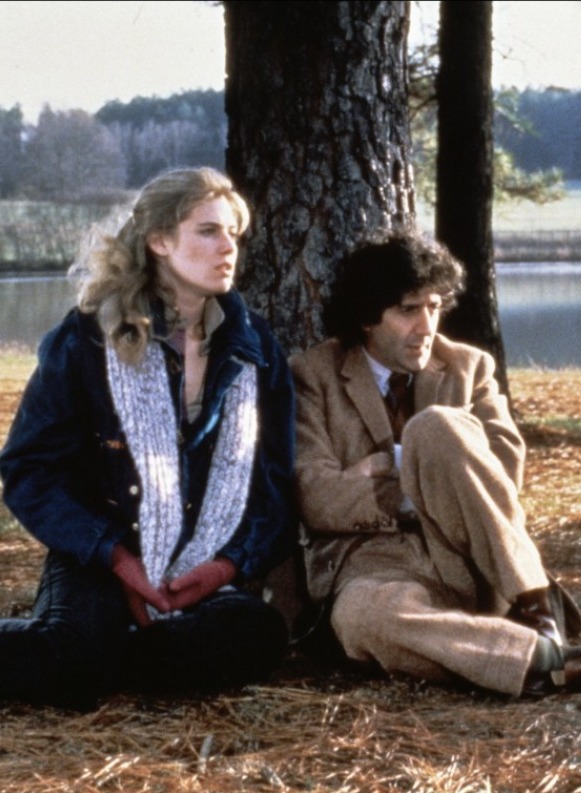 
On this, the final day (April 30) of 2017’s Poetry Month, we note an unrecognized cinematic genre, the mad-poet movie. While most verses are the product of quiet contemplation, big-screen bards are often liquor-loving lechers, not unlike Tom Conti’s character in 1983’s Reuben, Reuben.

REUBEN, REUBEN. Written by Julius J. Epstein. Based on the 1964 novel by Peter De Vries and its 1967 stage adaptation, Spofford, by Herman Shumlin. Music by Billy Goldenberg. Directed by Robert Ellis Mller. Running time: 101 minutes. Mature entertainment with the B.C. Classifier’s warning: occasional coarse language, swearing, nudity and suggestive scenes. OUR GUEST TODAY IS Gowan McGland, the famous poet and lecturer. Tell us, Gowan, what made you choose a life of letters?
“My whole body cried out against the inhumanity of regular employment.”
Well, that certainly is a sentiment that speaks to the artist in us all. I must say, I admire the integrity of your vision.
“Personally, I can’t wait to sell out. I just can’t seem to find any buyers.”
Edith McGland, you were married to Gowan for six years. What’s he really like?
“He combines tremendous ambition with overpowering sloth.”
Here is a winning movie mixture. Take one director, such as Robert Ellis Miller, a television veteran who has spent years on the periphery of the feature business turning out unsatisfying oddities like Any Wednesday, Sweet November (both 1966) and The Heart Is a Lonely Hunter (1968).
Add a screenwriter like Julius Epstein, an Oscar-winner for his work on Casablanca (1943) and a man with a proven way with words to adapt Peter De Vries's 1964 comic novel.
Mix together with a relatively new screen presence, such as Tom Conti, the British stage and TV actor who played the title role in Merry Christmas, Mr. Lawrence (1983).
The result is Reuben, Reuben, the first mad poet movie of the 1980s. At large in New England, the whisky-swilling McGland (Conti) is a total delight as he wrestles with his inner demons and any female foolish enough to be charmed by his Scots-Welsh womanizer’s reputation.
His estranged wife Edith (Kara Wilson), who is working on a McGland biography, is long past having illusions about him. Not so Geneva Spofford (Kelly McGillis), a Connecticut college coed ready to embrace a doomed romance with the larger-than-life Gowan.
Yes, it is a set piece, a button-pushing tragi-comedy. It is also resolutely literate adult entertainment, a breath of fresh air at a time when too many movies are geared to the undemanding, undiscriminating tastes of adolescents.
Developing a classic conceit, Reuben, Reuben delivers both skilfully written dialogue and an assortment of bang-on performances.
I’m glad you could join us here today, Gowan.

Afterword: In the absence of any reliable academic research, I’m going to guess that it all started with Dylan Thomas. The Welsh wild man of letters — he gave us the line “do not go gentle into that good night” — was celebrated as a mad poet during his lifetime. A hard-drinking, free-loving human train wreck, he died in 1953 during a U.S. tour. He was just 39, and is today remembered as the very model of a modern artistic tragedy. That story was told in Sidney Michaels’s 1964 Broadway play Dylan, in which Alec Guinness played the title role. (Guinness, who won a Tony Award for his performance, celebrated his 50th birthday during the play’s eight-month run.)
Mad poet movies arrived in 1966, with Sean Connery taking a break from the James Bond franchise to play priapic versifier Sampson Shillitoe in director Irvin Kershner’s A Fine Madness. In a 1972 variation on the theme, Sarah Miles starred as Lady Caroline Lamb, a scandal in 19th Britain because she was mad about a poet (Lord Byron, who was himself somewhat sanity-challenged). Cinematic anarchist Rainer Werner Fassbinder put his stamp on the new sub-genre in 1976 with Satansbraten (Satan’s Brew), a slapstick political satire about an unhinged Berlin bard.
I may have been wrong about Reuben, Reuben being the first mad poet movie of the 1980s. That distinction probably goes to director Marco Ferreri’s Franco-Italian Tales of Ordinary Madness, a 1981 drama shot in the U.S. with  Ben Gazzara starring as a fictional liquor-loving, sex-addicted wordsmith. In 1987, director Barbet Schroeder released Barfly, with Mickey Rourke playing a character based on Charles Bukowski, the poet Time magazine once hailed as a “laureate of American lowlife.” In 1990, writer-director John Kent Harrison contributed Beautiful Dreamers, in which a wild Walt Whitman (Rip Torn) gives a buttoned-down Canadian doctor and his wife a new outlook on life. Finally, in 1994, writer-director Alan Rudolph acknowledged that women could have their own moments of artistic exuberance, casting Jennifer Jason Leigh as wisecracking wit Dorothy Parker in Mrs Parker and the Vicious Circle.
I suspect that some ambitious cinema student could work the whole mad poet movie trope into a useful paper. Worth examining are such historical dramas as director Agnieszka Holland's 1995 feature Total Eclipse, focused on the creative friction between French poets Paul Verlaine (David Thewlis) and Arthur Rimbaud (Leonardo DeCaprio); Christine Jeffs’s 2003 feature Sylvia, in which Gwyneth Paltrow plays the emotionally troubled Sylvia Plath; and Laurence Dunemore’s The Libertine (2004), with Johnny Depp in the title role as Restoration rake John Wilmot.
Among the subjects for further study are I’m Not There (2007), director Todd Hynes's truly mad movie about Bob Dylan, the pop star who borrowed his surname from Dylan Thomas and recently had his poetic credentials validated by a Nobel Prize win; and Howl (2010), co-directed by Rob Epstein and Jeffrey Friedman, a feature examining the creative process of the Beat generation poet Allen Ginsberg (James Franco) who, if not mad, was certainly angry. Also worth a look is director Andy Goddard’s 2014 Set Fire to the Stars, if only because it tells the story of Dylan Thomas (Celyn Jones) and his first U.S.visit, as seen through the eyes of John Brinnin (Elijah Wood), his American tour organizor.