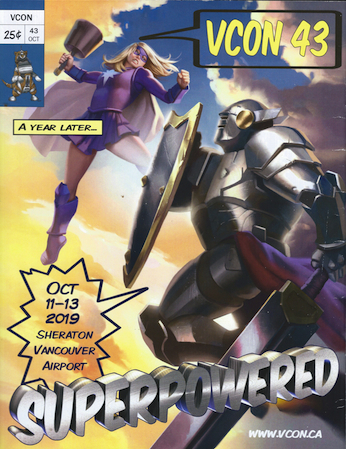 The one that wasn’t: The original announcement of the cancelled VCON 43 promised that the event would be “superpowered.


No Hope for an historian’s interview


Since its online debut in October 2013, Reeling Back has celebrated the opening day of VCON, Vancouver’s annual science fiction & fantasy convention, as our “official” birthday. Today (October 11), scheduled to be Day One of VCON 43, thus marks this website’s sixth year in cyberspace. Just four weeks ago, the West Coast Science Fiction Association (WCSFA), VCON’s organizing body, announced that it had cancelled the 2019 event “and work to rebuild . . . for a 2021 launch.” Needless to say, the convention’s unexpected demise disappointed a lot of people. For me, a minor program participant, it meant that I would not have the opportunity to sit down for a public interview with Hope Nicholson, the con’s Pop Culture Guest of Honour. A force to be reckoned with in Canada’s comic arts community, Nicholson is the founder of Winnipeg’s Bedside Press, an independent publisher of new works and classic comics reprints. I had looked forward to chatting with her about her multi-tasking as an editor, publisher, historian — her 2017 book The Spectacular Sisterhood of Superwomen is a must read for any serious graphic arts fan — and advocate for indigenous comic creators. To let everyone know how seriously I take the chronicling of comics history, I was going to post a feature story that I wrote back in 1967, an opinion piece that was published under the headline The Crusade that Cleaned-up (sic) Comics. Oh, wait. I can still share it in celebration of Reeling Back’s continued survival.

The above is a restored version of a Toronto Telegram feature by Michael Walsh originally published in 1967. For additional information on this archived material, please visit my FAQ.

Afterword: Reporters do not write the headlines that appear over their stories, so I am not guilty of that hyphen in “The Crusade that Cleaned-up Comics.” As for the rest, well, it was 1967, and 52 years ago there weren’t a lot of comic-book historians in Canada. Serious comics fans had to make do with cartoonist Jules Feiffer’s pioneering book The Great Comic Book Heroes (1965) and the occasional newspaper (or magazine) article put together by some journalist working against a deadline and, it must be admitted, with the attitudes of the day.
Today, a list of books about comics, graphic novels and sequential art would fill its own book. Cultural historians really began taking comics seriously in the early 1970s, and in 1974 I took the opportunity to review three representative titles (posted here). In May, 2017, I had the pleasure of reviewing Hope Nicholson’s The Spectacular Sisterhood of Superwomen. Her work continues and, if the stars align, I'll see her at the 2020 Vancouver Comic Arts Festival (VanCAF), scheduled for May 16 and 17 at the Roundhouse Community Arts and Recreation Centre in Yaletown.