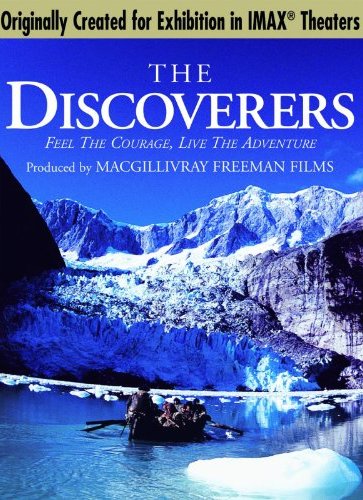 Its origins as an IMAX theatrical film are emphasized on the DVD packaging for Greg MacGillivray’s 1992 documentary The Discoverers.


Expanding on an Expo moment


Before there was “fake news” there were “pseudo-events,” a term coined by Daniel Boorstin to describe shifts in the popular culture due to advertising. Born on this day (October 1) in 1914, the social historian saw his work inspire Greg MacGillivray’s 1992 documentary The Discoverers.

THE DISCOVERERS. Written and co-directed by Jon Boorstin. Inspired by the works of historian Daniel J. Boorstin. Music by Steve Wood. Produced and directed by Greg MacGillivray. Running time: 40 minutes. MID-WAY THROUGH THE DISCOVERERS, it's clear that even the most impressive tools have their limits. A film that promises to invoke "that special feeling you get at the moment of discovery," the new OMNIMAX featurette is doing nothing of the sort.
It begins with a promising recreation of the 1520 voyage of Ferdinand Magellan, focusing on his navigation of the 334-mile strait that bears his name.
Cleverly linked to that is a vignette on the 1990 voyage of the spacecraft Magellan, and the images of Venus that it transmitted to Dr. Ellen Stofan's NASA research team.
Next is a re-creation of Maria Sanz de Sautuola's discovery of the Altamira cave paintings in 1879. Now, though, the film is attempting to link to American scientist Louis Herman's contemporary research into dolphin intelligence, a match that really does seem forced.
An uneasy marriage between two increasingly distinct forms of big screen film-making, The Discoverers illustrates the differences between a world's fair attraction and the special-venue theatrical motion picture. In its original version, the film was showcased in the Discoveries Pavilion, one of four theme pavilions at Seville's Expo '92.
It played in The Space Cinema, Spain's first OMNIMAX theatre. Sponsored by the European telecommunications company Alcatel, it fulfilled the requirements of international institutional art — it was spectacular while remaining bland and non-controversial, thus creating a favourable impression of the host nation.
A big-screen theatrical film, by contrast, needs to grab us by the lapels and make a case for itself and the places to which it's taking us. IMAX has already produced some great ones, among them Graeme Ferguson's eco-conscious Blue Planet (1990) and Stephen Low's The Last Buffalo (1991), a breathtaking encounter with a sculptor's art.
In The Discoverers, California's MacGillivray-Freeman Films attempts to expand an Expo moment into a stand-alone movie experience. Its screenwriter, Jon Boorstin,  invokes the title of a book by his father, social historian Dr. Daniel J. Boorstin. Unfortuntely, the 745-page bestseller from 1983 contributes little more than its name to the film.
Missing is the dynamic sense of purpose, even mission, that the great IMAX directors put into their work. A picture that's neither fish nor fowl, MacGillivray-Freeman's latest is an earnest patchwork of well-meaning vignettes.
The result is an unchallenging use of epic technology, a film that could be one of television's science magazine shows writ large.

Afterword: Canada, a big country, takes pride in having given the world IMAX, its big movie format. And it’s true that the 70mm film system was developed by Graeme Ferguson, Robert Kerr and Roman Kroitor, a team that came together at the National Film Board. As a group, they worked on Labyrinth, the NFB's multi-screen Expo 67 production. Shortly after, they recognized the potential in a new projection mechanism invented by an Australian named Ron Jones. First demonstrated at Osaka's Expo 70,  their IMAX format found a permanent home in Toronto's Cinesphere, the 27-metre-high triodetic dome that dominates that city's Ontario Place entertainment centre. As spectacular additions to urban science museums and entertainment complexes, more than 35 custom-built IMAX theatres were in operation around the world when the company introduced its OMNIMAX and 3D IMAX at Vancouver’s Expo 86.
While the process remains Canadian, Americans were significantly involved in the production of IMAX pictures from early on. Greg MacGillivray’s California-based MacGillivray-Freeman Films came on board in 1974, making its IMAX debut with To Fly, a 27-minute history of flight created for the National Air and Space Museum in Washington, D.C. Among his 35 IMAX films to date are the documentary short subject Oscar nominees Dolphins (2000) and The Living Sea (1995). In mid-July, MacGillivray attended the premiere of his 2017 IMAX documentary We, The Marines, a 40-minute celebration of life in the U.S. Marine Corps made for the opening of the Medal of Honor Theatre in Triangle, Virginia’s National Museum of the Marine Corps.
A June 2017 report tells us that there now are 1,257 IMAX theatres in 75 countries. With Hollywood blockbusters being regularly released in the IMAX format, the question arises: is IMAX still a Canadian company? We know that in 1994, in its quest to increase capital for corporate expansion, IMAX corporation was sold to a U.S. investment group, WGIM Acquisition Corp. It was then restructured and merged with Trumbull Company Inc. These changes were brought about by Plainview, N.Y.-born Richard Gelfond, an American entrepreneur who took the company public that year with a NASDAQ stock offering. Gelfond has been the company’s CEO since 1996, and he recognized the potential in the Digital Re-Mastering (DRM) computer algorithms  developed by its Toronto-based technology group under Brian Bonnick.
Bonnick’s 2001 breakthrough made it possible to convert existing movies into the IMAX format for distribution in the big screen IMAX theatres. This allowed the company to become a major force in the international entertainment industry. Though owned and operated by Americans, the corporate headquarters continue to be in Mississauga, Ontario. In November 2016, it  was selected as one of Canada's Top 100 Employers (2017) and Greater Toronto's Top Employers (2017), honours that were announced in a special Globe and Mail magazine feature.