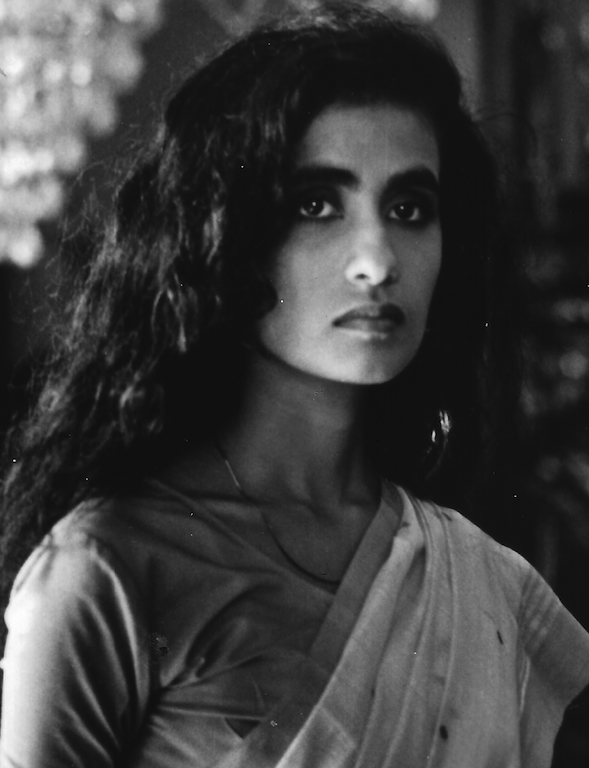 Sanda (Akesh Gill) discovers that life as a princess in a castle is not what she imagined in director Harvey Crossland’s 1993 drama The Burning Season.

Waking to a nightmare


A state of emergency remains in effect in British Columbia today (August 15) as the west coast province experiences its most destructive summer of wildfires since 1958. The situation brings to mind the title of a B.C.-made movie from 1993, director Harvey Crossland’s Indo-Canadian drama The Burning Season.

Monday, November 15, 1993.
THE BURNING SEASON. Co-written and co-produced by Annette Cohen. Music by Gordon Durity. Co-written, co-edited and directed by Harvey Crossland.  Running time: 103 minutes. Mature entertainment with no B.C. Classifier’s warnings. THEIR STORY MIGHT HAVE been a fairy tale. In writer-director Harvey Crossland's The Burning Season, Sanda Sharma (Akesh Gill), a young beauty held captive by an uncaring father-in-law, really does fall in love with a prince from a faraway land.
Their story has elements of a Harlequin Romance. It takes place in a world where men such as Rajput prince Patwant (Ayub Khan-Din) accept their duty, and a woman's duty is to her man.
From its opening moments, though, Crossland's drama lets us know that happily-ever-after is not a likely ending to this tale of real-life cultural distress. He shows us Sanda's dream as she lies in an uneasy sleep beside the pre-teen daughter of her failed first marriage.
In the dream, she is walking with her Indo-Canadian mother-in-law Santosh (Ronica Sajnani) in a sunlit, open-air market. Through the crowd she sees Kulbir (Dale Azzard), the father of her child, and Rajiv (Om Puri), his father.
Santosh urges her to join them.
"I cannot," Sanda says, pulling away, her dream suddenly becoming an anxious nightmare.
Filmed on location in B.C. and India, The Burning Season is an ambitious if not entirely successful attempt to describe a cultural Bhopal effect. It is possible to see in Sanda's struggle for self-realization a reflection of the 1984 industrial disaster in which poison gas leaking from a U.S.-owned chemical plant killed more than 2,000 people.
Having been married into the Sharma family, Sanda is expected to be obedient to its traditional patriarchal values. Unfortunately, her ability to be properly submissive to a husband, to "know her place" in the community, has been affected by exposure to secular ideas and western higher education.
Co-written with Toronto producer Annette Cohen, Crossland's screenplay suggests that women suffer more profoundly than men when cultures come into conflict. Sanda, forced into herself, becomes selfish.
A woman who wants what she wants, she begins an affair with Pat, a teaching assistant at the Vancouver university where she's studying cultural anthropology. A hereditary noble, he must return to rural India when his father is taken ill.
"I'll come back soon," he tells her. ". . . I love you. Nothing can stop me coming back to you."
He tells a different story to his male thesis supervisor: "I won't be coming back."
Imagine Pat's discomfort when Sanda arrives in Madhya Pradesh and knocks on the door of Pahargarh Fort, his family manse. Imagine his parents' delight at the news that Mrs. Sharma is pregnant by their son.
As it turns out, their ways can accommodate her condition.
It is Sanda who has difficulty adjusting.
“Don’t treat me like a wife,” she tells Pat, following their elaborate royal wedding. She fears she's leapt out of the Canadian melting pot to burn in some backward Hindu fire.
As played by Vancouver actress Gill,  Sanda is as petulant as she is determined. Her feminism comes with consequences — including the possibility she may never be happy within her own culture.
Not a feel-good message for men or women, The Burning Season is, nonetheless, an honest look at a slice of the modern Canadian immigrant experience.

Afterword: The early 1990s saw the birth of a new movie sub-genre, the Indo-Canadian film. It began in Toronto, where Deepa Mehta set her directorial debut feature Sam & Me (1991). A year later, we saw Masala, a creative, challenging first feature written and directed by its star, Srinivas Krishna. The Burning Season arrived in 1993, a first feature from Ottawa-born Harvey Crossland. A director whose heritage was not Indian, Crossland developed his fictional screenplay with his casting director Jiten Varma and co-producer Amarjeet Rattan. In the production package issued at the time of The Burning Season’s release, the Punjab-born Rattan is quoted as saying that “people may find it odd that two men set out to make a film about a woman, and an Indo-Canadian woman at that.” Crossland notes that “we were not telling the story of an Indian woman, but the story of a woman who happens to be Indian.” The shooting script was a collaboration between Crossland and the film's other co-producer, Annette Cohen.
Unlike Mehta (and the Indo-American director Mira Nair), who built their careers on films exploring the experience of being Indian in the modern world, Crossland decided not to pursue theatrical feature filmmaking. Following the release of The Burning Season, he moved to Toronto, where he found success directing for television. In recent years, he’s been the director most frequently assigned to the CBC’s Murdoch Mysteries series (17 episodes to date). In addition, the Hallmark Channel has made Crossland its go-to guy in Toronto for seasonal made-for-TV movie fare. Among his credits are the TV features Finding Christmas (2013), On the Twelfth Day of Christmas (2015) and Sound of Christmas (2016).