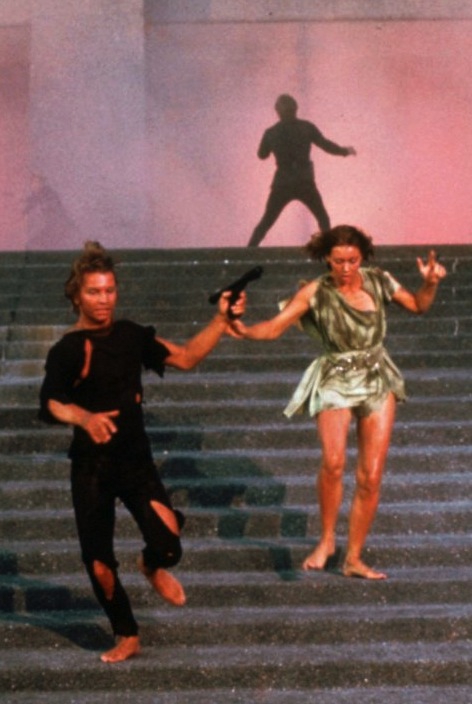 Young and on the run


For Michael Anderson, 1956 was a very good year. Born on this day (January 30) in 1920, the diffident English film director stepped into the international spotlight 60 years ago. March 1956 saw the release of his breakout science fiction feature, 1984, based on the George Orwell novel. Eight months later, his adaptation of Jules Verne's Around the World in 80 Days opened. An all-star event, the picture premiered in a big-screen process called Todd-AO and went on to beat out Cecil B. DeMille's The Ten Commandments for the best picture Oscar. Anderson soon relocated to Hollywood, where he worked on serious films, such as 1968's The Shoes of the Fisherman, and some not so serious, such as the pulp hero adventure, Doc Savage: The Man of Bronze (1975). In the mid-1980s, Anderson moved to Canada, making it his home base for the rest of his creative career. Montreal was among the filming locations for his 1986 TV feature Sword of Gideon. An adaptation of George Jonas's novel Vengeance, the picture was remade in 2005 by Steven Spielberg as Munich. By the time he retired in 1999, Anderson had shot theatrical and TV movies right across the country. Honouring him with its Lifetime Achievement Award in 2012, the Director's Guild of Canada noted that he currently lives in Gibsons, on B.C.'s Sunshine Coast. Marking his 96th birthday today, Michael Anderson can count among his credits the top-grossing science-fiction feature of 1976, Logan's Run.

Tuesday, August 17, 1976.
LOGAN'S RUN. Written by David Zelag Goodman. Based on the 1967 novel by William F. Nolan and George Clayton Johnson. Music by Jerry Goldsmith. Directed by Michael Anderson. Running time: 119 minutes. General entertainment. THE LITTLE GREEN MEN AREN'T stupid. According to popular tradition, the first thing an LGM says to an Earthman is "Take me to your leader."
They could use a few LGM in Hollywood. LGMs would make fine script consultants, because they would ask all the questions that writers of screen science fiction so often ignore: What's going on? What's the big idea? Who's in charge here?
Logan's Run is one expensive project that needed such close questioning. A visually impressive combination of special effects, spectacular set design, matte and model work, its storyline makes about as much sense as Mother Goose.
The time is the 23rd century. The film's world consists of a single domed city, a controlled environment within which a race of young, attractive hedonists live thoroughly indolent lives.
They are ruled by the ritual of the Carrousel, a cruel rubric that ordains that citizens be terminated on their 30th birthdays. According to official dogma, the most worthy persons will survive the ceremony to enjoy something called "renewal."
These "lastday" rites are enforced by the "Sandmen." An elite corps of terminators, Sandmen pursue "runners," those misguided souls who believe in something called "Sanctuary," a place beyond the tyranny of the city where people can live out their natural lives.
Director Michael Anderson has been over such ground before. Among his credits is the 1956 British film version of George Orwell's 1984, the story of one man's search for a non-existent underground organization in a totalitarian world.
Here a similar situation exists for the 28-year-old Sandman named Logan 5 (Michael York). He is assigned the  task of locating "sanctuary." To provide him with a believable cover, the city's master computer (Lara Lindsay) lops two years off his life allotment.
Logan 5 wants to know if he will get his years back at the end of the assignment. The computer hedges.
At this point, Logan 5 begins to question the system, finally deciding that his run will be for real.
No, it doesn't make a lot of sense. In adapting the William F. Nolan and George Clayton Johnson novel from 1967, screenwriter David Zelag Goodman never lets us in on just who built the city, who runs it or what purpose it all serves. Under the circumstances, it's hard to empathize a whole lot with Logan 5's reactions.
Granted, he is shown to be running for his life. Stop and think about it, though, and his 1960s-style rebellion is not credible in this world of 2274. If the details offered in the screenplay were presented to the Robinson family's robot (from TV's Lost in Space), you'd hear the stock answer "it does not compute."
Unlike books, movies are not designed to pause for thought.  Anderson, a capable action director, focuses on Logan 5's flight, providing a series of distractions that keep things moving along at a brisk pace.
On one hand, he has to contend with a dogged pursuer, his former Sandman partner Francis 7 (Richard Jordan). On the other, he is accompanied by fellow rebel Jessica 6 (Jenny Agutter), a young woman who combines a no-nonsense manner with some seriously distracting no-panties fashion statements.
The choice between the Carrousel's iffy promise of renewal and the equally mythic hope of Sanctuary seems pretty arbitrary. In a film designed to be eye-filling rather than thought provoking, there's no real choice at all.
It's interesting that the craftsmen currently making occult-horror films, people whose stock in trade is mysticism, take great care not to outrage the filmgoer's sense of the sensible. Movie science-fictioneers, on the other hand, don't seem to give a damn.
The makers of recent releases such as Futureworld and Logan's Run obviously think that sci-fi cinema fans are undemanding cretins, who will be satisfied with a succession of brightly flashing lights and a hint of sinister intent. lt's enough to make a Little Green Man turn red.

Afterword: Logan's Run went on the become the top-grossing science fiction film of 1976, and a genre classic. In the year of the U.S. bicentennial, in which the blockbuster releases were such self-congratuatory features as Rocky and All the President's Men, director Michael Anderson's dystopian adventure, starring a pair of Brits, seemed out of tune with the times. So, what did I miss?
I have two strong memories from the August evening that I first saw the picture. One was the fact that Logan 5's world  — played by the futuristic Dallas Market Center shopping mall — bore a striking resemblance to the Lougheed Town Centre. A Burnaby, B.C. shopping mall, it included among its amenities the Famous Players Theatre chain's Lougheed Mall Cinemas, which happened to be the movie house in which Logan's Run was being screened. For me, that singularly prosaic fact drained the film of the wonder that I expected from science fiction. Instead of a vision of Things to Come, Anderson's adaptation of the 1967 novel was showing me things as they were.
What I missed was that the film's worldview spoke to its young audience. It reflected the nagging fear that life had been reduced to a succession of shiny storefronts and that there was no future outside of the grand galleria. Indeed, Logan's Run seems to have been the first example of shopping mall science fiction, a subgenre that now includes such enclosed dystopias as Gattaca (1997) and The Matrix (1999).
The second thing I remember from that evening was the audience reaction to the appearance of a supporting player in a silver dress identified as Holly 13. There was an audible buzz of recognition. As a working film critic, I had little time for television, so I had no idea who this Farrah Fawcett-Majors was. The subject of an iconic 1976 poster and the star of TV's Charlie's Angels, she was one more selling point in the brilliant marketing plan that accompanied the youth-oriented Logan's Run.
In 1977, the authors of the original novel — William F. Nolan and George Clayton Johnson — were credited with creating the 14-episode Logan's Run TV series that was broadcast on CBS. Gregory Harrison and Toronto-born Heather Menzies starred as the fugitive couple. Since the mid-1990s, various combinations of producers and directors have been involved in discussions of a big-screen remake. At one point, production was scheduled to begin in Vancouver in September of 2006. Since then, there have been many announcements but no actual filming.