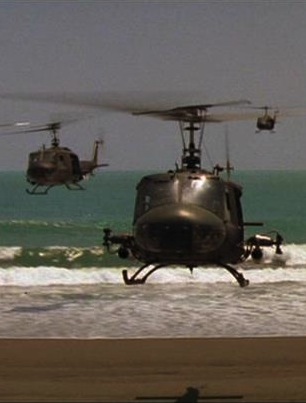 With Wagner's rousing "Ride of the Valkyries" blasting at full volume, Lt.-Col. Kilgore's attacking air cavalry unit sweeps in over the waves that he plans to surf, after securing the targeted village in Apocalypse Now.


Exposing the horror, confronting the truth


The cinema's great accidental artist, Francis Ford Coppola turns 75 today (April 7). Needing money in the early 1970s, he took a job directing "a cheap gangster movie," became caught up in possibilities and produced an enduring classic, The Godfather. Setting out in 1976 to make "a war film that could make a lot of money," he was "seduced" by his subject. The result was a unique anti-war movie, Apocalypse Now, a picture so powerful that it changed the American military's long-term approach to media relations. One unintended consequence of many filmmakers' opposition to the Vietnam war was that it alerted Pentagon publicists to the fact that Hollywood could not be counted on to wave the flag unconditionally. It helped that the 1980 election of corporate spokesmodel Ronald Reagan brought a muscular new militarism into the White House. Though individual filmmakers might be motivated by feelings of conscience or social responsibility, film studios single-mindedly pursued profit. If toeing the Pentagon line resulted in taxpayer subsidies (in the form of access to screen-filling men and machinery), granting the armed forces final script approval was a small matter. The turning point was 1986's Top Gun, a content-free navy recruiting poster, directed by former TV adman Tony Scott.

Sunday, August 12, 1979
NEW YORK — Five years ago, Francis Ford Coppola set out on a journey. With the Oscar-winning Godfather films behind him, Coppola announced he would next direct Apocalypse Now, a Vietnam war movie loosely based on Joseph Conrad's novella, Heart of Darkness.
He promised it would be something special. He promised "to create a film experience." He promised his movie would be unlike anything we had ever seen before.
Friday night [August 10, 1979], Coppola delivered on all his promises. Screened for the first time in its final form, Apocalypse Now is very, very special.
A stunning, shattering film experience, it is one of the most powerful films that I have ever seen. There really has never been a movie like it.
Reduced to plotline, Apocalypse Now is the story of a man with a mission. Captain Benjamin Willard (Martin Sheen) is a military assassin.
Willard's orders are to find Col. Walter Kurtz (Marlon Brando), a renegade Special Forces officer, and to "terminate his command with extreme prejudice."
Kurtz, once an able, intelligent officer with a brilliant record, has apparently gone insane. Together with an army of Montagnard tribesmen and American deserters, Kurtz is off waging his own war in neutral Cambodia. He must be stopped.
Conrad's 1899 novel, the literary inspiration for the film, was set in colonial Africa. The story's narrator journeys up a river to encounter an extraordinary white trader named Kurtz, a man whom the natives worship as a god. Before it's over, Conrad's hero confronts forces within himself and his fellow man that can only be described as "the horror."
In his film, Coppola shows us the horror. He sets Willard on board the Erebus, a naval PBR (Patrol Boat - River). His companions are a pair of black sailors (Albert Hall and Larry Fishburne) and a pair of whites (Fred Forrest and Sam Bottoms).
Together they enter a nightmare world that is tense, violent and all the more frightening because it really did exist.
A moody, atmospheric, but tightly controlled film, Apocalypse Now is an overwhelming achievement. Coppola set out to capture "the madness, the sensuousness and the moral dilemma" of the Vietnam war.
He succeeds to a remarkable degree. His is a picture that provokes deep irresistible feelings without insulting the intelligence of the audience.
A vivid, rich and textural work, Apocalypse Now blends sound and image in new and striking ways. One example (and one of the most remarkable scenes ever filmed) shows an air cavalry attack on an enemy-held village.
Because Lt.-Col. William Kilgore (Robert Duvall) believes that Wagnerian opera "scares the hell out of the slopes," he plays it over his loud-hailer. As his helicopters sweep in for the kill, "The Ride of the Valkyries" fills the sky. Such familiar operatic music has never been used to more devastating effect in a motion picture.
For Coppola, Apocalypse Now was a make-or-break film. He gambled both his reputation and his personal fortune to make the film the way he wanted it. The spectacular results were well worth his extravagant risk.
*   *   *
It was a long journey. John Milius wrote the original screenplay in 1967. Although Coppola owned the property (through his American Zoetrope Studios), his friend George Lucas was to be the director. The project was shelved.
It was revived in 1974. Coppola took personal charge and, when the U.S. military refused to co-operate with the filmmaker, he decided to go on location in the Philippines. By March, 1976, the film was ready to go before the cameras.
Budgeted at $12 million, Apocalpyse Now had a four-month shooting schedule (March to July) and was supposed to premiere on April 7, 1977 (Coppola's 38th birthday).
Cast problems, cost problems, health problems and weather problems (Typhoon Olga destroyed an estimated $1.3-million worth of sets, and cost Coppola six weeks of production time) interfered. Principal photography was not completed until May, 1977, and the final cost of the film stands at approximately $30.5 million.
For the last two years, the film has been "a work in progress." In May, Coppola entered his still-unfinished film in the Cannes Film Festival. Incomplete though it was, Apocalypse Now still walked off with the Festival's top prize, the Palm d'Or.
The public gets its first look at the film Wednesday, but only at theatres in New York, Los Angeles and Toronto. Apocalypse Now is scheduled to open in Vancouver October 10, a 70-mm, stereophonic sound production at the Stanley Theatre.

The above are restored versions of two Province reviews by Michael Walsh originally published in 1979. For additional information on this archived material, please visit my FAQ.

Afterword: In 1979, I shared with Coppola the belief that movies could make a difference, that speaking truth to power through such works as Apocalypse Now, and 1976's All the President's Men would insure a better world for us all. In 2014, I realize that their lasting legacy was to alert power to the importance of better controlling the mass media. Following the 9/11 event, the U.S. media effectively ignored widespread public opposition to the 2001 deployment of forces to Afghanistan, and the 2003 invasion (and subsequent occupation) of Iraq. As both "wars" dragged on, it became increasingly difficult to maintain the pretexts upon which they were based. By 2006, it appeared that a flood of anti-war films were in preparation. At least six features — Home of the Brave (2006), Rendition, In the Valley of Elah, Lions for Lambs, Redacted (all 2007) and Stop-Loss (2008) — were released. All were well-made, and all bombed at the box-office. For reasons too complex to unpack here, the cinema is no longer the place for serious civic engagement. The U.S withdrew its combat troops from Iraq in December 2011, after nearly nine years, but its forces remain in Afghanistan. Meanwhile, America continues its love affair with superheroes, with Captain America: The Winter Soldier the No. 1 box-office attraction since it opened Friday (April 4).

See also: In an interview in New York, following the 1979 preview screening of Apocalypse Now, director Francis Ford Coppola mused how he was "losing years off my life."