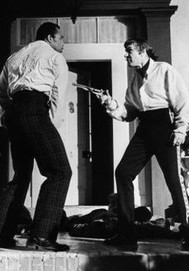 Bernard DeMarigny (John Colicos, right) chooses to stand his ground in a confrontation with an angry Drum (Ken Norton) during a slave rebellion in director Steve Carver’s 1976 feature Drum.


Persisting in the pursuit of vulgarianism


Acquitted yesterday (November 19) of all charges following his August, 2020 killing spree in Kenosha, Wisconsin, Kyle Rittenhouse has become an icon to America’s gun-crazed white supremacists. The fact that he’s getting away with murder can only deepen the social divide in the U.S. Sadly, the demented runt never had a chance. His very name doomed him to infamy. Those of his own generation — born January 3, 2003, he belongs to the millennium-straddling “Gen Z” — will recognize Rittenhouse as the evil secret society bent on world domination in the 2016-18 sci-fi TV series Timeless. Founded in 1778 by revolutionary-era polymath David Rittenhouse, it is the show’s big bad, with adherents that include time-travelling assassins. Baby Boomers are more likely to hear in the teen gunman’s name an echo of Kyle Onstott, the midcentury author of such “big bold novels” as Mandingo (1957) and Drum (1962). Not one to question his own white privilege, the Illinois-born Onstott drew upon the racialist attitudes of his day to create a “slavesploitation” genre, plantation porn set on a "human breeding farm" called Falconhurst in ante-bellum Alabama. The best-selling series grew to include 15 titles, and spawned two feature films for fans of bad taste and bare bosoms. Included was director Steve Carver’s 1976 adaptation of Drum.

DRUM. Written by Norman Wexler. Based on the 1962 novel by Kyle Onstott. Music by Charlie Smalls. Directed by Steve Carver.  Restricted entertainment with the B.C. Classifier's warning: Brutal violence and coarse language.
IT'S 1860. HAMMOND MAXWELL (Warren Oates), plain-spoken heir to an Alabama estate called Falconhurst, the site of his family’s slave-breeding business, is taking a midday meal on his white-pillared verandah. He has just given Regine (Pam Grier), his most recent bed-wench, to Drum (Ken Norton), his favourite stud nigger, and is cheerfully speculating on how long it will be '' 'fore she knocked."
New Orleans-raised Augusta Chauvel (Fiona Lewis), a proper white woman, is scandalized. Such talk at the table!
"Must you persist in being a vulgarian, Mr. Maxwell?"
"Miss Augusta," he replies self-righteously, "nigger fornicating is what Falconhurst is all about. If they stop fornicating, we stop eating.”
Drum, based on a pulp potboiler by Kyle Onstott, is the sequel to last year’s Mandingo.  (Indeed, Drum, the 1962 book, was the first of seven [eventually 14] sequels to Mandingo, a 1957 book.) The original movie was full of bad taste and bare bosoms, but it was all done with such overblown seriousness that a surprising number of critics were absolutely beside themselves in outrage.
Filmgoers caught on more quickly. Mandingo was, of course, an accomplished comedy, the sort of movie designed to gladden the hearts of Russ Meyer fans and readers of the National Lampoon. Audiences had the good sense to laugh out loud, just as they are doing during Drum, a film that offers more of the same.
Here, Warren Oates replaces Perry King as "Massa" Hammond, and effects some changes that are nothing short of miraculous. Gone is Hammond's soulful romanticism, his abhorrence of violence and his pronounced limp.
At least two other miracles have been wrought by continuing screenwriter Norman Wexler, this time wordmongering for action director Steve Carver. Both Ken Norton (boiled alive at the end of Mandingo) and Brenda Sykes have been resurrected.
Both performers, though they played major characters in the last film, turn up here in completely different roles. On deck as a special guest villain is John Colicos.
The Canadian actor plays an unpleasant New Orleans dandy who wants hero Drum to be his “bed-wench”. He sports an accent that he must have perfected during his days with the CBC drama department. " 'ammond! You are not see-riously con-see-dare-ring a nego-see-ation wiz nee-gairs?"
Here, the by-now familiar outrages of sexual perversion, miscegenation, social injustice, unthinking cruelty and deliberate sadism lead to a slave rebellion and double massacre. Believe it or not, though, Drum is actually less steamy (and marginally less violent) than its predecessor.
It manages the feat by working harder at generating laughs. It succeeds in being good, dirty fun.

CUT AND PRINT: Ken Norton, a professional boxer, is pretty handy with his mitts. In both Drum and Mandingo, he wins virtually every fight he gets into. The script guarantees it.
On Sept. 28 [1976], Norton is set to go before the cameras again, fists high. There is no guaranteed victory here, though. His opponent is Muhammad Ali, and their battle is for the 41st heavyweight championship.