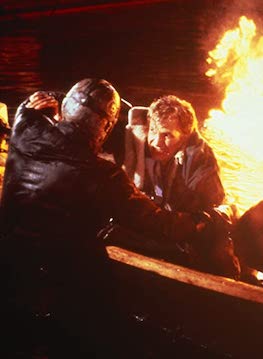 Camp back in business


I may be imagining things, but it seems that hardly anyone is concerned that today (May 13) is an actual Friday the 13th. Where is that sense of dread that once was part of seeing that number fall on this day on our wall calendar (a conjunction that happens at least once a year)? Lately, fewer of us are concerned that the passage of a black cat across our paths, breaking a mirror or saying the name of Shakespeare’s Scottish play out loud could have dire consequences. Bad luck prevention, along with the popularity of slice-and-dice horror films, is no longer a thing. It probably has something to do with our relationship to a real world in which no single day has a monopoly on the strange, the appalling or the awful. Who needs monster movies when the 24-hour television news channels serve up new horrors at the top of every hour? In the past week (May 5-12), 20 mass shootings have been recorded in the U.S., one of them following a high school graduation ceremony in Arkansas. And we’ve not even mentioned the ongoing wars, riots, protests and crises in the rest of the world. In less fraught times, the day became attached to a 12-feature film franchise that introduced us to a mindless serial-killing machine named Jason Voorhees. Today’s Reeling Back package adds two of those pictures to the archive (with links to the other following the Afterword to this posting). An accidental resurrection has the expected consequences in director Tom McLoughlin’s 1986 Friday the 13th Part VI: Jason Lives.

FRIDAY THE 13TH PART VI: JASON LIVES. Music by Harry Manfredini. Written and directed by Tom McLoughlin. Running time: 73 minutes. Restricted entertainment with the B.C. Classifier's warning: frequent violence. LOOK, I DON'T WANT to be a spoilsport, but these numbers just don't add up. On the evidence, Friday the 13th Part VI: Jason Lives has to be set in the 21st century.
According to the adult Tommy Jarvis (Thom Mathews), the child named Jason Voorhees drowned in Crystal Lake in 1957. We first heard about Jason's death in the original Friday the 13th, a film that opened with the murder of two  Crystal Lake campers a year later, in 1958.
Moving forward to present time — presumably 1980, the year of that picture's release — it told the story of crazy Mrs. Voorhees (Betsy Palmer), and her massacre of the young folk who are attempting to reopen the cursed summer campsite. Jason himself first appears in Friday the 13th, Part II (1981) set ''five years later,'' which has to be 1985.
A dutiful zombie, hockey-masked Jason is avenging the death of his mother, who was avenging his death in the first film. He begins his rampage by killing Alice (Adrienne King), the sole surviving character from the previous picture.
The events of Part III (1982) take place a few hours after those of Part II. In Part IV: The Final Chapter (1984), set a day or two later, we meet 12-year-old Tommy Jarvis (Corey Feldman), the brave lad who dispatches the monster to save his older sister.
Tommy (John Shepherd) is 18 when Jason lurches back to life again in Part V: A New Beginning (1985), so the year has to be 1991. To his credit, the kid manages to ''kill'' the creature a second time.
In the current film, Tommy is all grown up. Crystal Lake has changed its name to Forest Green, and the camp is back in business with a staff of fresh young counsellors who think Jason is some sort of legendary bogeyman.
Since Tommy looks about 30, the year has to be around 2003.
But that can't be right. The world of Part VI doesn't look any different from the world of the first film, and the plot — or the succession of violent, remorseless slayings that passes for a plot in this kind of picture — is indistinguishable from any other Part of this dreary series.
Under the direction of Tom (One Dark Night) McLoughlin, the indestructible Jason (C.J. Graham) adds another 18 to his death toll, 12 men and six women.
“Why’d he go dig up Jason?,” a tipsy old gravedigger wonders aloud midway through the mayhem. ''Some people have a strange idea of entertainment.’’

Afterword: The fact that I seldom bothered with plot details when writing about pictures such as Jason Lives, didn’t mean I didn’t know them. Because I never could tell going in whether a film would surprise me with a line of dialogue, a brilliant image or an insight worth sharing with my readers, I always took notes. And that’s why, in my review of the sixth Friday the 13th feature, I was able to take issue with the numbers.
From the beginning, numbers (as in ticket sales) were the only thing that really mattered to the moviemakers. Sean Cunningham, who produced and directed the first film in the series, was inspired by the financial performance of John Carpenter’s 1978 feature, Halloween. Cunningham’s success launched Hollywood’s decade-long love affair with homicidal maniacs, one that added Freddy Krueger, Chucky (the doll), and Candyman to its monster list. Mute, masked Jason Voorhees continued to serve his creators in print (in spinoff novels and comic books) and as a video-game star. He’s entirely absent, though, from the 1987-1990 Friday the 13th: The Series. Filmed in Toronto, the TV show returned to the old-school idea of Friday the 13th as a day of bad luck. Each episode involved the heirs of Vendredi’s Antique shop in their efforts to hunt down and neutralize the cursed items sold by their late uncle.