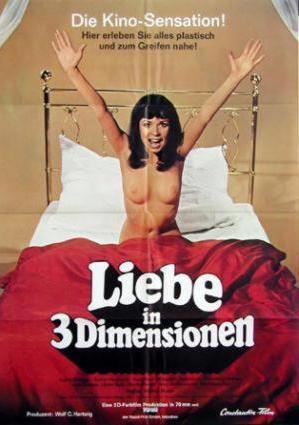 
Only the material lacks depth


On this day (February 18) in 1953, the New York premiere of Bwana Devil made stereoscopic features the new movie craze. Though interest was short-lived, an attempt to revive 3D films in the early 1970s gave us such oddities as director Walter Boos's 1973 sex comedy Love in Three Dimensions.

LOVE IN THREE DIMENSIONS. Written by Florian Vollmer. Music not credited. Directed by Walter Boos. Running time: 93 minutes. Restricted entertainment with the B.C. Classifier's warning: completely concerned with sex. FIRST CAME THE PROCESS. Then there were moving pictures. Finally there was cinema theory. One made the movies physically possible, the other gave them their aesthetic dimension.
Wait a minute!
Is that any way to start a review of a sexploitation film, a movie full of naked girls and sex-driven men, the kind of film that the provincial classifier says is “completely concerned with sex"?
Well, in a word, yes. This particular  sex epic was filmed in a depth-vision process, and it suggests that it's about time that moviemakers started taking the idea of three-dimensional films a little more seriously.
When the movies were first invented, they were just a gimmick for making pictures move. Before too long, though, theoreticians like Eisenstein and instinctive geniuses like Griffith were busy developing the basic grammar for this visual language.
The talkies spawned a whole new generation of thinkers who developed the rules that today govern the use of sound. Depth vision, on the other hand, has been another matter.
Introduced in the early 1970s as a gimmick to lure audiences away from television, it has never been anything more  than a good idea. Dropped from widespread use in 1955, it never had a  chance to grow up.
To really understand the problem you have to consider the relationship of the eye to the screen. With a normal flat movie image the distance between them is fixed. The eye focuses once and can then relax.
This means that the images on the screen can change without the eye having to refocus. Rapid cutting from scene to scene becomes possible, and visual trickery desirable.
By contrast, the 3D image approximates reality. Because it isn't "flat,” the eye is forced to choose how deeply it wants to focus and constantly adjusts for shifting distances. Using normal film techniques, such as quick cutting, gives the eye a real and occasionally painful workout.
Obviously making good stereo-vision movies means rewriting a good part of the rulebook. The trouble is that no serious filmmaker has ever gotten around to doing that.
Recent films like The Stewardesses, Andy Warhol's Dracula and now Love in Three Dimensions have ignored the problem. For a director like Germany's Walter Boos, 3D is still nothing more than a sales gimmick.
His current film is standard sexploitational fare, the kind of bland opus that lends itself to statistical rather than artistic analysis. Running 90-odd minutes, it features 15 loosely connected vignettes in which nine women and eight men strip off for the camera.
The setting is a Munich apartment block where teenaged Petra (Ingrid Steeger) is house-sitting for her randy sister Dagmar (Evelyn Raese). Formula plotting ensures that the activities include at least one example of female masturbation, lesbian love-making, and a female shower stall scene. In addition, there are 10 variations on good ol' boy-girl sex.
What distinguishes Boos’s movie from the general run of German-made erotic films is its light-hearted tone and sharp cinematography. Originally filmed in 70 millimetre, it was then printed down to the standard 35 millimetre theatre size.
This leaves it with a visual clarity that is quite striking in a field where blow-ups from 16 millimetre are more often the rule.
Aside from that, though, Love in Three Dimensions is tedious going. As a process, 3D can add real depth to a motion picture. Adding depth to its material is another matter.

Afterword: About that emphasis on process. I was a kid during the first 3D craze of the 1950s, and it seemed to come and go in a flash. I’ve since learned that back then, there was no one way to produce pictures in 3D. Though stereoscopic films were invented circa 1915, the lack of any standardized format effectively marginalized their market penetration. Take Love in Three Dimensions as an example.
In his 2021 tome, A History of Three-Dimensional Cinema, the prolific American film studies professor David A. Cook tells us that director Walter Boos's picture was “shot in Triarama — 70mm single-strip anamorphic side-by-side optically converted to over-and-under 35mm 2:1.” Triarama, a European process otherwise known as Hi-Fi Stereo 70, lasted for about eight years. It was used to make maybe nine features, most of them Spanish horror movies.
To be clear, it was sex, not horror, that brought about a resurgence of interest in 3D. “It was 1969's The Stewardesses that did the trick,” Cook insists. Its impressive financial success convinced “many potential investors that the future of 3D — indeed the future of movies generally lay in pornography.” The fact that pornography was even a consideration had much to do with the changing — some would say revolutionary — times in which the boom generation had come of age.
In West Germany, exploitation filmmakers connected with the mood of the moment with something called “white-coat erotica,” movies that offered sex and science in a documentary style. In 1970, director Ernst Hofbauer adapted serious sexologist Günther Hunold’s non-fiction Schulmädchen-Report into the first of a series of Schoolgirl Report features. His editor on the project was the Bavarian-born Walter Boos, who went on to direct five of the 13 Report pictures made between 1970 and 1980. It's said that Boos really came into his own with Love in Three Dimensions. According to Chris Poggiali (on the Temple of Schlock website): “Not only is it his magnum opus, but it surpasses Andy Warhol’s Frankenstein as the best of the “adults only” 3-D movies of the 1970s."
Love in Three Dimensions was Ingrid Steeger’s third appearance in a Boos comedy. The winsome actress was in the sixth year of a four-decade-long career when she was cast in his 1972 naked nurses comedy Krankenschwestern-Report, followed by his Mädchen, die nach München kommen, set at the 1972 Olympics. She was later on view in the fourth and fifth entries in the Schoolgirl Report series (both 1973). As the content of the movies became more problematic, Steeger successfully transitioned into television comedy.

In depth: Stereoscopic films currently in the Reeling Back archive include director Alfred Hitchcock’s classic thriller Dial M for Murder (1954); Alf Silliman Jr.’s The Stewardesses  (1968/81); Paul Morrissey’s Blood for Dracula (1974); Ferdinando Baldi’s Comin’ at Ya! (1981); and Charles Band’s Parasite (1982). The year 1983 brought with it Bruce Malmuth’s The Man Who Wasn’t There; Charles Band’s Metalstorm: The Destruction of Jaren-Syn; Lamont Johnson’s Spacehunter: Adventures in the Forbidden Zone; and Ferdinando Baldi’s Treasure of the Four Crowns. IMAX 3D made its debut with Colin Low’s Expo 86 short Transitions and is well used in Stephen Low’s The Last Buffalo. In 2012, we saw Joss Whedon’s The Avengers.