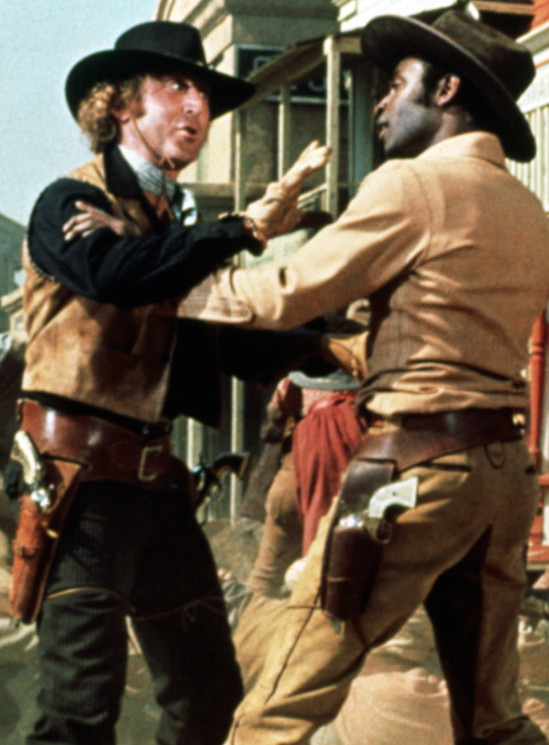 
An exercise in the comedy of excess


Remembered by Baby Boomers as the big screen’s original Willy Wonka, genial Gene Wilder built a successful career on comedy roles. Born on this day (June 11) in 1933, he earned an Oscar nomination for his performance in Mel Brooks’s parody Western, 1974’s Blazing Saddles.

BLAZING SADDLES. Co-written by Norman Steinberg, Andrew Bergman, Richard Pryor and Alan Uger. Music by John Morris. Co-written and directed by Mel Brooks. Running time: 93 minutes. Mature entertainment with the B.C. Classifier’s warning: Parents — a comedy with some coarse language.
MEL BROOKS IS A MADMAN. There is no other explanation for a movie like Blazing Saddles, the film that does for the Western what Hitler did for Germany.
Raw, ribald and riotous, B.S. (an abbreviation that I'm guessing director Brooks uses himself) burlesques the grand ol’ oat opry mercilessly. It’s a comedy of excess that contains all of the gags — sight, sound and situation —  that TV writer Brooks  could never use on the tube, expressed in the sort of joyfully loose language that can not yet be repeated in a daily newspaper.
A mild sample: Lili Von Shtüpp (Madeline Kahn), a saloon entertainer, spots a cowhand settled back with his feet up on the edge of the stage. Undulating towards him, she says “What’s your name, cowboy?”
“Name’s Tex, ma’am.”
“Are you in show business?” purrs the leggy performer.
“No, ma’am.”
“Then,” she says sharply, hooking her toe under his boots and shoving him over, “get your frigging feet off my stage!”
Miss Kahn, blonde-wigged and black-stockinged, is parodying Marlene Dietrich, James Stewart’s romantic interest in 1939’s Destry Rides Again. Lili has been sent to Rock Ridge to seduce the sheriff, the one honest man who stands between land-grabber Hedley Lamarr (Harvey Korman) and his ambitions.
Brooks’s basic story, credited to Andrew Bergman, has been told countless times before. It’s the familiar tale of avaricious railroad builders who, in league with the usual crooked politicians, are plotting to sell out the hard-working homesteaders.
Marauders are hired to terrorize the townsfolk, but their malicious plans are foiled by a quick-thinking sheriff and his drunken deputy who, when he dries out, reveals himself to be the Fastest Gun in the West.
The film opens authentically enough, with shots of a typical movie frontier, a big sky over ruggedly beautiful foothills. We hear Frankie Laine singing the rousing Blazing Saddles ballad, complete with bullwhip punctuation.
Our hero is railroad worker Black Bart (Cleavon Little). Sentenced to hang for bashing his work gang’s foreman, a bully named Taggart (Slim Pickens), over the head with a shovel, Bart is instead handed a badge and sent to be the saviour of embattled Rock Ridge.
Of course it’s all part of land-grabber Lamarr’s plot. Already terrorized by outlaw raids, he expects the townsfolk to be completely disheartened by the arrival of a black man wearing a badge.
Bart’s story resembles the sort of unrelenting lampoon that Mad Magazine did in its early years, when it still had writers who knew how to be funny.
What it’s most like, though, is an extended TV skit, the sort of comedy that sacrifices build for immediate impact, the quick laugh that's virtually independent of what comes before or after.
Brooks is the director whose first screen comedy, 1967’s The Producers, left me limp with laughter. He really cuts loose here, but because B.S. lacks the thematic discipline of his earlier outrage, it's actually a less funny film.
Consider his camera’s first look at Sheriff Bart. Starting with a close-up of saddle bags etched with the Gucci logo, it pulls back to reveal Our Hero resplendent in a golden-tan shirt and slacks ensemble, white-hatted and sitting astride a noble-looking palomino.
In the background, we hear a jazz band arrangement of April in Paris. It sounds a lot like the Count Basie Orchestra.
Bart nudges his steed forward, and the camera follows them as they cross the empty prairie, riding past the formally attired Basie band that just happens to be set up in the sagebrush.
Funny? Perhaps.
Western? No.
But then, I’ve already said that Brooks is mad. Fleshing out his insane cast of characters is a corps of top-flight comics.
Miss Kahn, who recently distinguished herself in a pair of Peter Bogdanovich comedies, is right on as the Germanic showgirl who bills herself as “The Teutonic Titwillow.”
Gene Wilder, who co-starred in The Producers, shows up here as the laconic, lovably alcoholic Jim, the town drunk who turns into the Waco Kid. His performance parodies a parody, based as it is on Lee Marvin’s Oscar-winning Kid Shelleen in the 1965 comedy western Cat Ballou.
Carrying off the villainy with fine style is TV actor Harvey Korman. Moustachioed and mincing meanly, he charms his henchmen with eloquently evil plans.
“Gee, Mr. Lamarr,” enthuses his plain-talking henchman Taggart. “You use your tongue prettier than a $20 whore.”
R (for restricted) entertainment in the U.S., Blazing Saddles here is rated Mature with a coarse language warning. The line I just quoted will give you some idea why B.C. film classifier Ray MacDonald has addressed his warning to parents.

Afterword: Although they only made three films together, the names of Mel Brooks and Gene Wilder remain linked in the history of film comedy. Brooks made his feature film debut in 1967 with The Producers, the movie that was Wilder’s breakthrough to stardom. In 1974, Wilder starred in two Brooks-directed hits, Blazing Saddles in February, and the year’s Christmas treat, Young Frankenstein. (The much-beloved Willy Wonka & the Chocolate Factory, a musical fantasy based on Roald Dahl’s 1964 children’s book, came along in 1971. Considerably calmer than a Brooks film, it was directed by Mel Stuart.)
Wilder’s longest creative collaboration was with actor and stand-up comedian Richard Pryor, one of the six writers credited with the Blazing Saddles screenplay. In 1976, they co-starred in director Arthur Hiller’s comedy-thriller Silver Streak. Director Sidney Poitier brought them together for a second time in his 1980 prison comedy Stir Crazy, then Hiller called on them to co-star in another urban comedy, See No Evil, Hear No Evil (1989). Wilder and Pryor were paired for the fourth and final time in director Maurice Phillips’s 1991 feature Another You. Gene Wilder died in August, 2016 at the age of 83.

See also: Gene Wilder made his own directorial debut in 1975 with The Adventure of Sherlock Holmes' Smarter Brother.