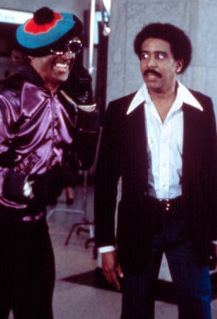 Working on the railroad


In their first film as a comedy team, Gene Wilder and Richard Pryor worked for a Canadian director while traveling aboard a train called the Canadian. Born on this day (November 22) in 1923, Arthur Hiller engineered the transcontinental mayhem in 1976's Silver Streak.

Monday, January 24, 1977.
SILVER STREAK. Written by Colin Higgins. Music by Henry Mancini. Directed by Arthur Hiller. Running time: 114 minutes. Mature entertainment with the B.C. Classifier's warning: occasional coarse language. IT'S A TOSS-UP. Depending on your bias,  the prize performer in Silver Streak is either Richard Pryor or the Canadian.
If you're expecting comedy,  it's Pryor's film. He manages to steal the show despite a belated entrance. He arrives past the half-way mark, long after the basic plot has been established and the major characters introduced.
By this time, we've already met George Caldwell (Gene Wilder), a somewhat spacey book editor. He is taking the train from Los Angeles to Chicago so that he can "enjoy the boredom."
Caldwell meets Hilly Burns (Jill Clayburgh), personal secretary to an aging art historian named Schreiner (Stefan Gierasch), who is on his way east to expose the dapper director of the Chicago Art Institute for the crook that he is. Hilly and George hit it off right away and adjourn to their adjoining sleepers for a roomette romance.
They are just settling in when George sees the old professor go sailing past their window.
On the outside.
Thereafter he meets the villains, a gang headed by Roger Devereau (Patrick McGoohan), the stop-at-nothing Art Institute boss. At about this time, movie director Arthur Hiller introduces the picture's running gag.
Caldwell gets thrown off the train.
He manages to catch up with it again, though, and gets thrown off a second time so that he can repeat the process. This is to spoof the days when trains really were the fastest form of transport.
It is during one of his dashes to get back on the train that Caldwell meets Grover Muldoon (Pryor), an auto thief with enough guile to turn any situation to advantage. As an actor, Pryor has the same ability, dominating virtually every scene that he's in with a sly combination of wit and skepticism.
A chameleon-like talent, Pryor created memorable characters in two of last year's [1976's] most successful all-black films, The Bingo Long Traveling All-Stars & Motor Kings (playing the slugger who thought he could break into the white baseball leagues by posing as a Cuban) and Car Wash (as the storefront evangelist Daddy Rich). Here he engineers the film's funniest scene, the blackening of Gene Wilder.
If you go to Silver Streak expecting an adventure film, then the star is the train itself. Although the fictional Amroad Silver Streak crosses the American West, the part is played by the CPR's transcontinental Canadian,  travelling along its own right-of-way.
Originally, 20th Century-Fox planned to film in B.C. There were problems that could not be resolved between the CPR and the BCR (British Columbia Railways). Thus the project — and all the dollars that multimillion-dollar movies pump into local economies — went to the province where Hiller was born, Alberta, and in small measure to Ontario, where Toronto's Union Station stood in for the Chicago and Kansas City terminals.
Hiller's cinematographer, David M. Walsh, has photographed the CPR's rolling stock with the kind of loving care that cannot help but thrill train buffs. Seen from every possible angle, the sleek, vista-domed train is backdropped by magnificent prairie sunsets and the kind of Rocky Mountain scenery that sends postcard sales soaring.
Nor is it giving anything away (considering the poster art being used to sell the film) to mention that the movie has a smashing climax, one in which the Silver Streak is seen crashing through to the main concourse of Chicago's Union Station. The scene has impact, something noticeably lacking from screenwriter Colin Higgins's script.
Higgins, responsible six years ago [1971] for writing a film called Harold and Maude,  claims to have been inspired by Alfred Hitchcock's classic 1959 suspense comedy, North By Northwest. Unfortunately, his homage is hardly up to its inspiration.
The problem is one of character. Higgins, in creating Caldwell, Devereau and Hilly Burns, gives his actors little more than blurry sketches upon which to hang performances. With the exception of Pryor (and the train) the stars are walking through their roles.
For all but an out-and-out train nut, Silver Streak is a picture that takes a long time to get moving. On the whole, it gives an imitation of a commuter train rather than an express, offering humour and action in alternating flts and starts.
*    *    *
BRAKEMAN, SPARE THAT STATION! — It may look as if the CPR decided to make its case for ending passenger service by destroying both its engine and a large chunk of Toronto's Union Station. In fact, neither came to any real harm.
To stage the climactic crash, Fox set decorators went to work on a pair of adjoining aircraft hangars owned by the Lockheed Corporation in Burbank, California. Cost of the scene, including initial construction and filming of its destruction, was approximately $500,000 US.

Afterword: The Canadian Pacific Railway inaugurated its luxury transcontinental passenger service — the Canadian — in 1955. For a time, its streamlined dome cars were a national symbol, a postcard subject as famous as the Mountie or the beaver. Unfortunately, the Canadian's success was short-lived. On April 1, 1960, Trans-Canada Air Lines introduced the Douglas DC-8 jetliner on its Montreal-to-Vancouver route, an innovation that cut the flight's time by nearly 50 per cent and did serious damage to the CPR's bottom line. In 1970, the privately-owned railroad began petitioning the federal government to release it from its passenger service obligations, a plea that was back in the news when the above review was written. In 1978, the feds finally relented. Ottawa set up the Crown Corporation Via Rail to maintain the service, which it does in a considerably diminished form to this day.
Although he achieved his greatest cinematic success at a time when auteur theory was all the rage, Arthur Hiller did not claim to be the "author" of his films. A cinematic collaborator, he did some of his best work with celebrity screenwriters, among them the self-promoting satirist Paddy Chayefsky — The Americanization of Emily (1964) and The Hospital (1971) — and Broadway comedy writer Neil Simon:  The Out-of-Towners (1970), Plaza Suite (1971) and The Lonely Guy (1984). During more than a decade of directing television shows of every kind, he learned the value of versatility. Though his feature film credits skew to the comedic, the list includes the 1972 musical Man of La Mancha, the 1975 historical docudrama The Man in the Glass Booth, the 1976 biographical drama W.C. Fields and Me and the horror thriller Nightwing (1979). Hiller is best remembered, though, for an unapologetic romance called Love Story, the 1970 feature in which Ali MacGraw told Ryan O'Neal that "love means never having to say you're sorry." The picture was nominated for seven Academy Awards (including a directorial nomination for Hiller) and cleaned up at the box office in a year awash with such gritty fare as M*A*S*H, Patton, Airport, and Catch-22. Earlier this year, the 76-year-old MacGraw and O'Neal, 74, began a year-long national tour of the 1988 stage play Love Letters. Following their October 14, 2015 opening night in Los Angeles, the co-stars were joined on stage by their Love Story director. Arthur Hiller celebrates his 92nd birthday today (November 22).

See also: Reeling Back visitors are invited to try our Arthur Hiller Quiz.