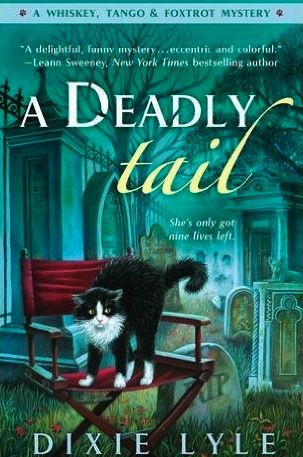 
Movie mania at the Great Crossroads


Winter officially ends today (March 19) with the late evening arrival of the vernal equinox. What better way to celebrate the coming of spring than with A Deadly Tail, the movie-themed fourth novel in the Whiskey, Tango & Foxtrot mysteries from Vancouver-based writer Dixie Lyle.

A DEADLY TAIL: A Whiskey, Tango & Foxtrot Mystery. By Dixie Lyle. St. Martin's Paperbacks, 2016. 352 pp. $9.99. HERE'S A COINCIDENCE. A Deadly Tail, the fourth volume in Dixie Lyle's Whiskey, Tango & Foxtrot mystery series, arrived in bookstores just a few weeks before the release of Tina Fey's new movie, the otherwise unrelated action romance Whiskey Tango Foxtrot.
Here's another coincidence. Lyle's latest involves movie making. It begins with the death of an unlovable film producer, Maurice Rolvink, during the filming of Sherlock Zolmes, a  mash-up of mystery (its hero is Sherlock Holmes) and horror (the problem is zombies) genres.
Rolvink's cast and crew are on location in rural New York state, shooting on the grounds of eccentric billionaire Z.Z. Zoransky's palatial estate. Suspects abound within the community of creative folk attached to the low-budget production.
Readers familiar with the previous books in the series know that author Lyle is an accomplished mash-up artist, producing stories that blend the comfortable cozy mystery genre with broad paranormal comedy. Narrating the tale is Dierdre "Foxtrot" Lancaster, Zoransky's capable, multi-tasking administrative assistant.
Foxtrot's partners in crime-solving are a smart-mouthed cat named Tango, and Whiskey, a dead dog with shape-shifting abilities. They share a telepathic link. WTF, indeed.
Complicating matters is the fact that Foxtrot has a second job. She oversees the afterlives of the inhabitants of the estate's rambling pet cemetery, which just happens to be a supernatural nexus known as the Great Crossroads. Here, the presence of the movie company has inspired Tango to undertake her own production, an all-animal epic, cast from the Crossroads' ethereal talent pool.
On call are the shades of such classic screen stars as Lassie, Benjie and Trigger, four-legged performers whose backstories are woven into this eclectic entertainment. Of course, problems within the parallel worlds intersect.
What drives the fun is Lyle's natural wit and a love of language that keeps the novel's narrative bubble light. At times, it seems that the punning, stream-of-consciousness conversations are rambling aimlessly, or that the storyline has been abandoned for an irresistible riff on a Monty Python routine.
Like the best raconteurs, Lyle actually is story-building throughout, tossing off ideas that seem random until they return as integral pieces of the final puzzle. A Deadly Tail is the work of a mature author whose characters occasionally discuss thoughtful, even profound ideas before their dialogue finds the funny. This comic novel contains one deeply sentimental scene that reduced me to tears.
Finally, here's a coincidence that may not be a coincidence at all. The current novel's plot, involving movie-making on the Zoransky estate, appears to be an homage to a landmark moment in B.C movie history.
A Vancouver-based writer who delights in sharing pop culture discoveries, Lyle must know the story behind 1932's The Crimson Paradise. The first sound feature made in B.C., it was partially shot on the family estate of the movie's financial patron, coal-mining heiress and wannabe actress Kathleen Dunsmuir. Though no one died during the production, the picture itself died at the box office.
A Deadly Tail, drawing upon a growing WTF fan base, is doing considerably better. The series continues in August, the expected publication date of Purrfectly Dead.

The above is an original Reeling Back review by Michael Walsh published in 2016. For additional information on this archived material, please visit my FAQ.

Also by Dixie Lyle: The three previous Whiskey, Tango & Foxtrot Mysteries are titled A Taste Fur Murder (2014), To Die Fur (2014) and Marked Fur Murder (2015). To sample the first chapter of A Deadly Tail, click on this link.