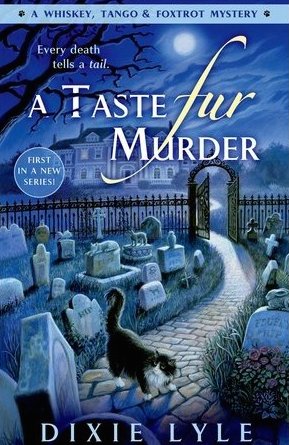 THE WHOLE STORY — To see a complete list of the 385 items currently posted to Reeling Back, visit the FULL SITE INDEX. To locate specific names or subjects, type your key word(s) into the Search box (located in the right-hand corner of the nameplate above), and click on the magnifying glass (search) symbol. The archive grows almost daily, so please feel free to explore.


Discovering a new author who writes laugh-out-loud funny dialogue is a rare treat. When the comic lines come out of the mouth of a talking cat, well, the writer must be Canadian fantasist Dixie Lyle, currently responsible for the Whiskey, Tango & Foxtrot mystery series.

There was a time when I wouldn't have looked twice at a book promising "an animal-loving Gal Friday with a telepathic cat, a shapeshifting dog, and a ghost of a chance at solving supernatural crime . . ." I couldn't imagine actually enjoying a book by someone called Dixie Lyle.

That all changed in the days running up to my meeting with Tanya Huff. Regular visitors to Reeling Back may remember my quoting Huff on the subject of books versus movies in a February 2014 blog entry. The prolific science-fiction and fantasy author was the guest of honour at VCON 34, held in downtown Vancouver in late October, 2008.

I was asked to do a public interview with Huff during the convention. As I was not familiar with her work, my summer reading included the first books of three of her series: Blood Price (1991), about a private investigator who works with a vampire; Summon the Keeper (1998), about a young woman charged with securing a hellmouth in Kingston, Ontario; and Valor's Choice (2000), an item of military science fiction about a female space marine.

As I'm generally indifferent to fantasy, and actively dislike vampire fiction, I approached the task more as responsibility than a pleasure. By the time we sat down for our interview, though, I was a fan, not of either genre, but of Tanya Huff.

Her ability to create characters and settings, her attention to relationships and, most of all, her wonderful sense of humour, made me want more. I have since read all three Keeper novels, the five Blood books, the Blood short story collection and three-novel Smoke and Shadows spin-off series. Huff's five Heinlein-like Confederation novels are a total delight, and I'm looking forward to the promised 2015 addition to the series, Peacemaker.

Which brings me, at long last, to Dixie Lyle, a Canadian author who appears to be channelling all of Huff's best qualities in the Keeper-like A Taste Fur Murder (2014). Both series feature a young woman "chosen" for the task of supervising a patch of paranormal real estate. Both enjoy conversations with feline familiars.

That said, Lyle's fantasy agenda is significantly different from Huff's. Billed as "A Whiskey, Tango & Foxtrot Mystery," A Taste Fur Murder takes up the challenge of blending comic fantasy with classic cozy mystery.

Lyle's protagonist, Deirdre "Foxtrot" Lancaster, is introduced as the trusted administrative assistant to Zelda Zoransky, a billionaire whose limitless wealth allows her to keep a rambling pet cemetery on the grounds of her New York State estate.

The story opens with Foxtrot being reunited with Tango, the cat she thought was dead, and Tiny (later to be renamed Whiskey), a dead dog whose ectoplasmic body allows him to interact with the living. Whiskey, Tango Foxtrot! Is Lyle having us on?

Well, yes. This is an author who delights in word-play and tangential thinking. Unlike Huff, whose Keeper tales are written in the third person, Lyle's story is Foxtrot's own first-person account of her journey into paranormal realms.

Her "real" world responsibilities — which include police liaison when one of the mansion's staff is found dead — are complicated by the discovery that her old cat talks, her new dog shape-shifts and that the estate's pet cemetery is a cosmic crossroads over which she has been made guardian.

Lyle, whose handbag of tricks includes making unexpected historic connections, has a fine ear for comic dialogue. The quick-quipping exchanges among cat, dog and bemused human keeps the pace sprightly and the mood light throughout.

The same is true of the second book in the series, 2014's To Die Fur, and I am also looking forward to the March release of Marked Fur Murder. With tongue firmly in cheek, Lyle has a real talent for turning out hairball hits.

With the increase in longer, sunnier days here in Vancouver, my own work pace has improved. On the eve of the 2015 Academy Awards, the ten most recent additions to the Reeling Back archive are:

NORTH CHINA COMMUNE — An example of the National Film Board of Canada documentarists at their best, this 1980 feature looks at life in the Peoples Republic at a time when memories of the 1949 revolution were coming into quiet conflict with hopes for something more. (Posted February 19).

DIAL M FOR MURDER — In the dying days of the first 3D-movie boom, director Alfred Hitchcock made this suspense thriller, the 1954 feature that proved that it was possible to produce cinematic art in a stereoscopic screen process. (Posted February 18)

THE DAY OF THE LOCUST — British-born director John Schlesinger won an Oscar for his first American movie, 1969's Midnight Cowboy, a look at the mean streets of New York. He was less successful with this 1975 examination of Hollywood's boulevards of broken dreams. (Posted February 16)

THE LEGEND OF KOOTENAI BROWN — Vancouver's performing community turned out in full force to make this 1991 Western an occasion to party. Played for fun, it offers a take on B.C. Interior history that's puckish rather than precise. (Posted February 14)

CHAINDANCE — Finding a project he believed in, Michael Ironside pulled out all the stops. He co-wrote the screenplay, produced and provided a superb starring performance for this challenging 1991 tale of prisoner rehabilitation through social service. (Posted February 12)

THE POSEIDON ADVENTURE — Following the mass-market success of producer Irwin Allen's 1973 suspense thriller about a capsized ocean liner, the 1970s became the decade of the all-star disaster epic. (Posted February 11)

JERRY GOLDSMITH (8 scores) — Arguably the greatest composer of motion-picture music ever, Jerry Goldsmith left a legacy of soundtrack recordings. Eight of his CDs released in the 1990s are reviewed here. (Posted February 10)

ADDAMS FAMILY VALUES — In 1993, director Barry Sonnenfeld returned to the spooky mansion for a second visit, but had real difficulty finding much humour in this lame tribute to the 1960s television hit that was based on an even older series of New Yorker magazine cartoons. (Posted February 9)