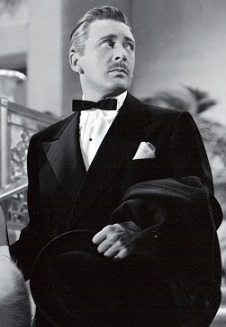 In a publicity photo taken circa 1944, actor LEON AMES has the proper look for a Nazi-hunting secret agent.


UnearthIng intrigue after hours in B.C.


During a 1972 visit promoting the film Brother of the Wind, Leon Ames sat down with me for an interview. The veteran actor, born on this day (January 20) in 1902, shared memories of spotting spies while on location in Victoria during the Second World War.

"WE HAD A VERY interesting experience up here," Leon Ames  recalled, casting his mind back 28 years to wartime Victoria. "Peter Lawford and I were credited with unearthing a German spy ring."
Veteran actor Ames, 69, was in Vancouver to publicize his most recent project, Brother of the Wind, a film in which he provides the narration for animal handler Dick Robinson's on-screen actions. He recalled his last stay in B.C., during the shooting in Victoria of the movie Son of Lassie.
In addition to Ames and the famous collie, the film starred Peter Lawford, June Lockhart and Donald Crisp. It was 1944, and their film was the story of a boy who goes off to war, leaving behind his sweetheart and faithful dog.
"We had two experiences up here," Ames remembered. "We were at the Empress Hotel. I saw an American army officer walk through the lobby with his tunic unbuttoned and runover heels on his shoes.
"And not shined. I sort of took note of that.
"I said, 'That doesn't look like any army officer I ever knew,' from his conduct in the lobby. Well, it turned out he was a deserter from the United States navy who was hanging on the coattails of an army officer, who was a drunk, up here on a hideout and drinking in a room. He was buying booze for the guy and wearing his uniform.
"That was the beginning," Ames said, as the memories came back to him. "That was the first strike we made.
"Later Peter and I were invited to a party," he said, explaining that movie actors on location were popular at local social gatherings. "We saw this group of people with strange accents.
“While we were there, this beautiful woman came out of a bedroom, and Peter and I began to compare notes." The actors, already sensitive to the scent of intrigue from their discovery of the deserters, were now really taken aback. "I said, 'Do you know who I think that is?'
"No. Peter, I think, said it first," Ames said, correcting himself. "But anyway, we think it was Eva Peron.
“And it was.
"Eva Peron."
It had only been a matter of months since Eva's husband, Argentinian colonel Juan Peron, had seized control of his Latin American homeland. Peron was pro-Axis, and he had made his country a major centre for German intelligence. The American actors' identification of the dictator's wife was of great interest to Canadian authorities.
“She was up here at that time with this group of spies," Ames said. "She was mixed up with a little German group, too."
The clue set off Allied counterintelligence and, as Lassie performed heroics before the movie cameras, our own agents moved quickly in camera, cracking the great Victoria spy ring.
"Nothing was ever said about it," Ames recalled, "But we were presented with a carton of American Camel cigarettes by the Canadian colonel who was in charge. That was all that was ever said about it "
Ames, an actor for more than 45 years, is best remembered as the man who played father to some of Hollywood's most beloved actresses. "I didn't start that way," he said. "Years ago I was a so-called leading man — whatever that means. I don't know.
"I was signed by a studio from a [stage] play, long  years  ago. Then I played nothing but  heavies for quite some time — the last one  was  Louis Napoleon in Suez [1938] with Loretta Young and Ty Power.
"Then I did sort of drift into this other phase of being,  well, fathers and good men, you know. I did a lot of that sort of thing. I became sort of a father image to all the glamour gals in Hollywood: Doris Day and Judy Garland and Liz Taylor and all that group."
"Now that I am, shall we say, more mature, I now play these old derelicts, and timber men and mountain climbers and sheep ranchers that I enjoy very much. I'm having more fun now than I've had in many years. And working more."
Clear-eyed and neatly bearded, Ames ticks off an impressive list of responsibilities for a retired man. A founder of the 26,000-member Screen Actors Guild, he is an ex-president and still serves as a director.
Add to that the fact that he just finished one picture in Alaska — working title is Timber Tramp [released in 1975 as The Timber Tramps], in which he co-stars with another acting veteran, Claude Akins — and that he is soon to begin work on another — Shoshonee, for the Sun International Organization — and Ames emerges as a very busy man, indeed.

The above is a restored version of a Province interview by Michael Walsh originally published in 1972. For additional information on this archived material, please visit my FAQ.

Afterword: Forty-eight years ago, a genial representative of Hollywood’s golden age shared with me his recollection of events that happened during location filming in British Columbia some 28 years earlier. It was a good story, and I was  able to quote him at length because I’d recorded our interview. It never occurred to me to doubt his word. My editor was happy with the piece, playing the headline across six columns: “Victoria spy ring cracked by movie actors.” No one who read it took issue with it to the point of writing or calling the newspaper. And yet . . .
Here I am, all these years later, thinking that a better reporter would have sought out a second source on Leon Ames’s dramatic tale. That’s the way it’s supposed to work with breaking news stories. And, yes, I know that the above item falls into the category of “celebrity Interview.” Less journalism than stylish stenography, its a branch of the craft in which fact checking is optional. Even so, in rereading it I began to wonder if Canadian counterintelligence agents, tipped off by American movie actors, really had cracked a Victoria spy ring in 1944.
After spending some time exercising my (limited) Google Search skills, I was unable to verify anything more than that scenes for MGM’s Son of Lassie, a feature film starring Peter Lawford and Leon Ames, were shot on Vancouver Island between mid-May and mid-November of 1944. As for Eva Peron, German groups or Axis spies visiting B.C. at that time, Google was unhelpful. Well, Ames did tell me that “nothing was ever said about it.” And, as I have no reason to believe that the gentleman was having me on, I can only conclude that my original story was exclusive to the Province.
A familiar screen presence for more than 50 years (1931-1986), Ames is probably best remembered for playing the harried father of difficult daughters (including Judy Garland in 1944’s Meet Me in St. Louis, Elizabeth Taylor in 1948’s A Date with Judy, and Doris Day in 1951’s On Moonlight Bay). With the arrival of television, he moved easily into playing title roles in such series as Life with Father (1953-1955) and Father of the Bride (1961-62). His last screen appearance was as Kathleen Turner’s somewhat magical grandfather in Peggy Sue Got Married (1986). Leon Ames died on October 12, 1993, at the age of 91.