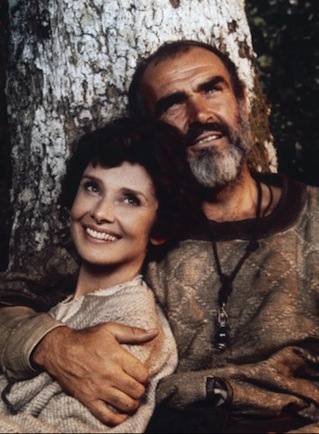 Reunited in Sherwood Forest, Maid Marian (Audrey Hepburn) and Robin Hood (Sean Connery) enjoy a moment of happily ever after in Richard Lester's Robin and Marian.

not dead yet, robin?


According to most home calendars, today (Feb. 14) is St. Valentine's Day. Never mind that in 1969, during the papacy of Paul VI, the Roman Catholic Church revised its calendar of saints and delisted the third-century martyr for lack of verifiable detail. He remains the patron saint of florists and chocolatiers. Apparently we can thank poet Geoffrey Chaucer (1343-1400) for inventing the "old tradition" of associating his day with the celebration of twitterpation. Later, the folklore-collecting Brothers Grimm added the phrase "happily ever after" to the language of love and, by the mid-19th century, people were exchanging heart-adorned greeting cards. In the rush to exploit the lucrative romance market, Valentine promoters seem to have forgotten that, fairy tales notwithstanding, the most famous love stories almost always end badly. Think Adam and Eve, Samson and Delilah, Pyramus and Thisbe, Troilus and Cressida, Anthony and Cleopatra, Lancelot and Guinevere, Romeo and Juliet, Heathcliff and Cathy, Clyde and Bonnie, Rhett & Scarlett, Juan and Evita, Dick and Liz, John and Yoko . . . At one time or another, every one of those stories has made it to the screen, so you know I'm right. An exception to prove the rule just might be the tale told by director Richard Lester in his hugely entertaining 1976 love story Robin and Marian.

Monday, March 29, 1976
ROBIN AND MARIAN. Written by James Goldman. Music by John Barry. Directed by Richard Lester. Running time: 106 minutes. Mature entertainment with the B.C. Classifier's warning: occasional violence throughout. WHAT A CONCEPT! What a cast! What a marvellous-yet-mellow movie!
Robin and Marian, Richard Lester's latest gift to filmgoers, is a package brimming over with unexpected delights and not a few surprises. It is one of those rare screen events, a must-see movie.
Robin is, of course, Robin Hood, the legendary bandit of Sherwood Forest, and one of history's favourite heroes. Douglas Fairbanks and Errol Flynn played the part in feature films that have become classics. Richard Greene made the role his own in a long-running television series.
Robin and Marian is like none of the above. Screenwriter James Goldman, remembered for his historically-inspired play The Lion in Winter (1966), here advances the plot 20 years, in an attempt to look beyond happily-ever-after. This is the concluding chapter, a song that the minstrels seldom sang.
There is danger in this. Director Lester's greatest triumph to date is the high-spirited swashbuckler, The Three Musketeers. An irresistible feast of a film, it was followed by a necessarily sombre sequel, The Four Musketeers, in which the director brought the tale — and several of the characters — to an end.
Like The Four Musketeers, Robin and Marian has sombre overtones. It is the adult conclusion to the child-sized fantasies of Flynn and Fairbanks. It is a great movie because it does not destroy the legend, but clarifies it.
The film is not without humour or elements of high adventure — what Lester film could be? — but at its heart it is an epic of nostalgic inevitability. One scene provides the key to the film.
After 20 years of crusading with his king, Robin (Sean Connery) returns to England and Nottingham. He looks up Marian (Audrey Hepburn) who, in the interval, has become Mother Jennet, abbess of a small convent. He arrives on the day that she is due to be imprisoned, one of the minor results of the continuing conflict between King John (Ian Holm) and the pope.
After 20 years, Marian hardly recognizes her former lover. The sheriff (Robert Shaw) recognizes him instantly. "Robin!" he says with a mixture of amazement and, yes, affection. "Still not dead?"
After 20 years, the old enemies size one another up. "I'm nothing but a former captain, and you're still sheriff," Robin says.
"No advancement," the sheriff agrees, wistfully. Marian, meanwhile, is all set to go to prison for her faith.
Robin has other, more heroic ideas. He stands between her and the sheriff's guard, only to be rebuffed. "Robin, why don't you grow up?"
"I'm saving you!,"says Robin indignantly. And, with the sheriff looking on almost approvingly, he does just that.
Richard Lester is an absolute genius when it comes to developing period projects. He recognizes, and conveys to the filmgoer, the total feeling of an historical epoch. With his Musketeers films he was dealing with the 17th century, a post-Renaissance period of nationalist ferment in Europe.
In Robin and Marian he moves back to the 12th century, the period during which the Dark Ages became the Middle Ages. These are different times and the differences are reflected in the moods and attitudes of the characters.
The film opens with Robin and Little John (Nicol Williamson) fighting their last battle for Richard Lionheart (Richard Harris). When their mortally wounded king dies, they decide that it's time to go home.
In the tangled wood called Sherwood Forest, they happen upon old Friar Tuck (Ronnie Barker) and Will Scarlett (Denholm Elliott). They reminisce and laugh about the incredible legends that have grown up about them. Robin asks what happened to Marian.
A desire to make the past the present, to make the legend truth, begins to take hold. Robin may admit to John that it's all nonsense — "not at my age" — but to Marian he denies it vehemently. "You think I'm old, grey and old! Well, I'm not!"
The nostalgic inevitability is reflected in John Barry's haunting score. Barry, who was mainly responsible for the "James Bond Sound," here seems to borrow thematic inspiration from Walt Disney's forest drama, Bambi. In numerous scenes, his score begins with adventurous vigour, only to drift off into a mellower air, an apparent recollection of greener times past.
Lester's cast is singularly powerful. Connery, 46, is not afraid to act his age, and he does it better than anyone in the business. As in The Wind and the Lion and The Man Who Would Be King (both 1975), he is playing an adventurer and an idealist who compensates for his lost illusions with a lot of style.
Robert Shaw makes the sheriff a man of dignity, honour and guile. He shares Robin's nostalgia and has his own irresistible style. Inevitably, they must meet in battle.
Williamson, who has a memorable screen Hamlet to his credit, now plays a Horatio-like Little John to Connery's Robin. Harris, completely sappy as Camelot's King Arthur, is just fine as crazy Richard the crusader.
The single weak link is Audrey Hepburn, whose performance is competent without being particularly memorable. Columbia Pictures are selling the film as Miss Hepburn's return to the screen after an absence of seven years. As if anybody cares.
They are running ads showing her with a spaced-out expression and a line that reads "love is the greatest adventure of all." Fortunately, it's neither that simple, nor that boring.
Marian loves Robin. That's certain. Robin probably loves Marian. But he has other loves. The sheriff  comes closest to the truth when he calls Robin a man "a little bit in love with death."
Twenty years ago (1955-56), Richard Greene loosed an arrow to open the show that created a lasting impression on a generation of juvenile televiewers. That generation is now ready for Robin and Marian, the film from which the final arrow takes flight.

Afterword: A source of easy inspiration, the Robin Hood legend has proven irresistible to filmmakers before and since Lester's masterpiece. The list is long and includes Mel Brooks, who mined the lode for an over-the-top 13-episode TV series When Things Were Rotten (1976), then recycled the idea as a satirical feature, Robin Hood: Men in Tights (1993). Sean Connery's surprise guest appearance in the final scene of 1991's Robin Hood: Prince of Thieves was the best thing about the Kevin Costner version. Television keeps turning out series featuring the character. In 2001, Disney's made-for-TV movie Princess of Thieves offered Keira Knightley as the old outlaw's daughter bent on keeping up the family business. Not as imaginative was Beyond Sherwood Forest (2009), filmed on location in Vancouver-area woodlots, but it did give actress Erica Durance the opportunity to play a feisty Maid Marian.