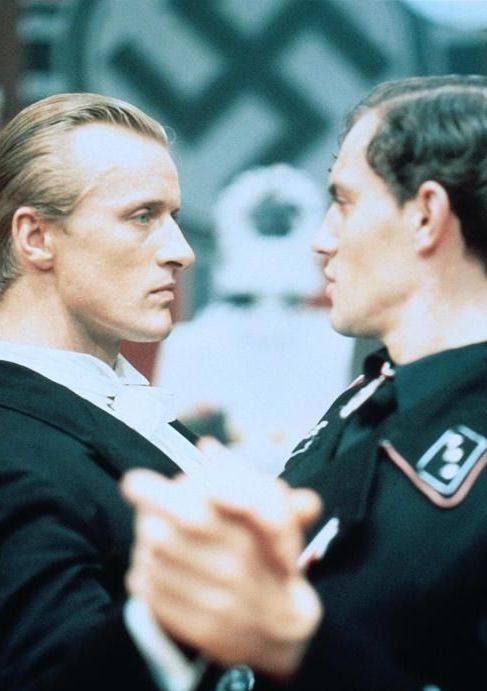 In love with war


If this Reeling Back posting had been made on July 18, it might have noted the 1610 death on that day of Michelangelo Merisi da Caravaggio, the Italian Baroque painter who gave us new ways of seeing art, or the 1817 passing of Jane Austen, the English novelist who was a pioneer of literary realism, especially in the depiction of women. In addition, it would have celebrated the birth in 1938 of Paul Verhoeven, the Dutch director who expanded our ways of experiencing cinema art and whose “career-long project,” (according to Slant online magazine critic Jaime N. Christley) has been “to demonstrate that every woman has a touch of Lysistrata.” Today, it’s November 9, so instead we’ll recall the opening of the 2016 Total Verhoeven event in New York. Organized by the Manhattan-based cinema archive Film at Lincoln Center, it was a 14-day retrospective that included his 16 feature films and five short subjects, each an example of his ability to “push the boundaries of sex, violence, and accepted good taste to daringly subversive ends.” The four Verhoeven films being added today to the Reeling Back archive (with links to each following the Afterword to this posting) include his examination of Holland’s Second World War experience of occupation and liberation, the picture to be remembered when viewing his Starship Troopers, the 1977 “good war” movie Soldier of Orange.

SOLDIER OF ORANGE (Soldaat van Oranje). Co-written by Gerard Soeteman and Kees Holierhoek. Based on the memoirs of Erik Hazelhoff. Music by Rogier Van Otterloo. Co-written and directed by Paul Verhoeven. Running time: 146 minutes. Mature entertainment with the B.C. Classifier’s warning: some gory violence, coarse language and swearing,  some nudity and suggestive scenes. In Dutch with English subtitles. LET'S BE HONEST. WHEN all is said and done, after we’ve made it clear that we find war an appalling waste and the idea of war horrifying, we all like war movies.
Well, good war movies. A Bridge Too Far (1977) might have had all the (male) stars in the world in it, but it was a lousy picture. Patton (1970), on the other hand, cleaned up at the box office, gets top ratings every time it turns up on the tube and is a home videotape best-seller. And, don't forget, the best-selling movie of all-time [in 1979] is called Star Wars.
Good war movies combine four elements: strong characters, camaraderie, a just cause and enough action to keep the adrenalin flowing. Filmgoers looking for such a film need look no further than Soldier of Orange, a 1977 Dutch-language feature produced in association with the British Broadcasting Corporation.
It is autumn, 1938. In Leiden, a university town in Holland, the freshman class is going through the ritual initiation. Beneath an ancient banquet table we meet Erik Lanshof (Rutger Hauer), a first-year law student whose life will be irrevocably changed by the five friendships he forms this night.
Politics is of no particular concern to Erik, Jan (Huib Rooymans), Will  (Peter Faber), Guus (Jeroen Krabbé), Robby (Eddy Habbema), Alex (Derek de Lint) or Jacques (Dolf de Vries). When German troops invade their country though, each becomes involved in a different way.
Jacques wonders whether it will be possible to just sit things out. Alex, though the son of a German mother, dons the uniform of the Netherlands and heads for the front.
Robby establishes a wireless link with London. Guus undertakes a little gentlemanly espionage and Jan, a Jew, desperately wants to get out of the country.
Erik hardly knows what to do. Before he can sign up for the army, Holland is overrun, her Queen (Andrea Domburgh) flees to England, and Gestapo terror is a fact of everyday life.
Reluctantly, more as an act of friendship than patriotism, Erik becomes involved with the resistance. Then the first of the six friends dies in a hail of Nazi bullets, and the war becomes an immediate, brutal reality.
In Soldier of Orange, director Paul Verhoeven has fashioned a tale, not of heroics, but of maturation. His screenplay is based on the memoirs of Erik Hazelhoff, who served with the Dutch resistance, flew with the RAF and, eventually, became an aide to Holland’s Queen Wilhelmina.
By choosing to focus on the fortunes of six specific characters, Verhoeven provides filmgoers with a microcosmic look at his country at war. Though long (at 146 minutes), his picture never seems so because we are totally involved in its vital, absorbing tale.
Finely acted and superbly crafted, Soldier of Orange is an excellent example of something we all like: a good war movie.

Afterword: A European born in 1938, Paul Verhoeven experienced a very different Second World War than his North American contemporaries. Holland was a nation invaded, occupied and later liberated. Its people struggled to survive, wary of the extremists who either chose collaboration or resistance. Soldier of Orange (and 29 years later, Black Book) was a clear-eyed, unromantic reflection of that reality. During his 17 years in Hollywood, he became famous as a specialist in the hyper-fantastic, producing such science-fiction epics as RoboCop (1987), Total Recall  (1990), Starship Troopers (1997) and Hollow Man (2000).
No romantic, Verhoeven often mixed social satire with grit and gore (to say nothing of straight-up feminism). While New Wave sci-fi fans were divided on his Philip K. Dick adaptation Total Recall, he was universally reviled by Robert A. Heinlein devotees for his take on the master’s mildly fascistic 1959 novel Starship Troopers. It’s probably fair to say that Heinlein, drawing upon his experience of war from the U.S. perspective, was commenting on what he saw as America’s later moral decline into a consumer society. Verhoeven, drawing on his very different experience, turned the tale into a commentary on war movies.
Imagine, he seems to be saying to us, that this Starship Troopers is an example of pure propaganda, the sort of pro-military picture that the Terran Federation would produce to inspire its citizens to serve in its armed forces. The movie contains echoes of director Leni Riefenstal’s 1935 German classic Triumph des Willens (Triumph of the Will), and Frank Capra’s Why We Fight series of “information” films, produced for the U.S. Army between 1942 and1945. Viewed in that way, Verhoeven’s picture is nothing short of brilliant, and a fine companion piece to its predecessor Soldier of Orange.