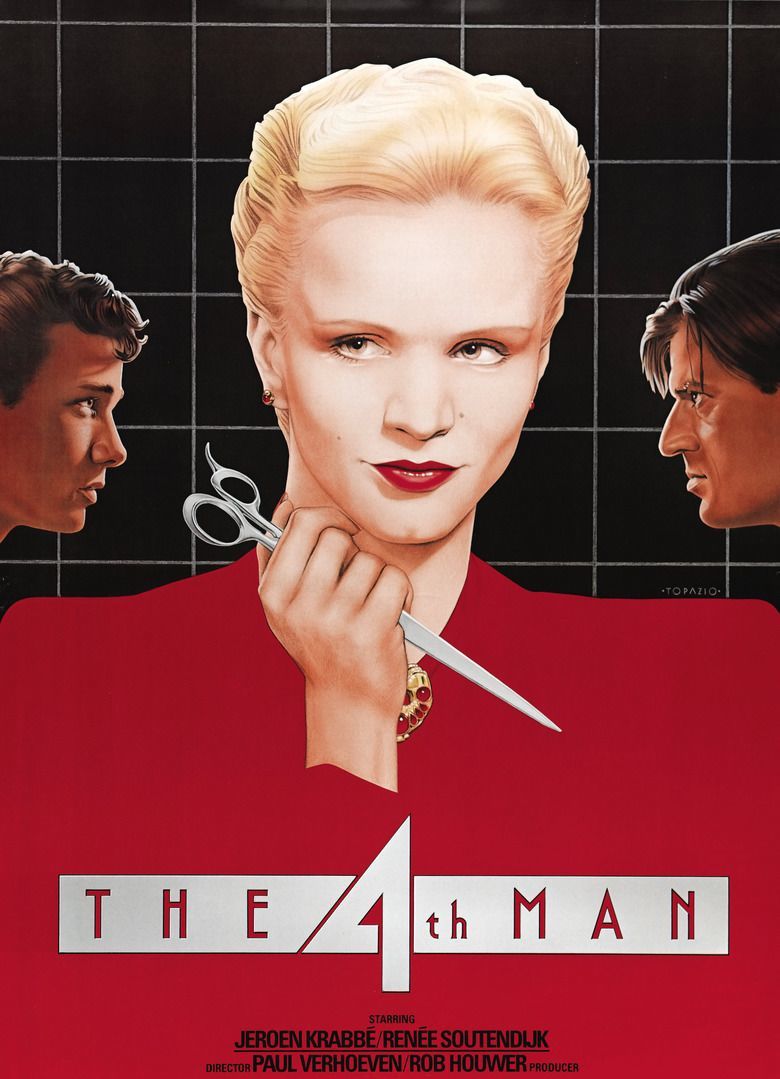 Femme fatale and patron of the arts Christine Halsslag (Renée Soutendijk) is at the emotional centre of director Paul Verhoeven’s 1984 psychological thriller The Fourth Man.


Portrait of the artist as a disaster area


If this Reeling Back posting had been made on July 18, it might have noted the 1610 death on that day of Michelangelo Merisi da Caravaggio, the Italian Baroque painter who gave us new ways of seeing art, or the 1817 passing of Jane Austen, the English novelist who was a pioneer of literary realism, especially in the depiction of women. In addition, it would have celebrated the birth in 1938 of Paul Verhoeven, the Dutch director who expanded our ways of experiencing cinema art and whose “career-long project,” (according to Slant online magazine critic Jaime N. Christley) has been “to demonstrate that every woman has a touch of Lysistrata.” Today, it’s November 9, so instead we’ll recall the opening of the 2016 Total Verhoeven event in New York. Organized by the Manhattan-based cinema archive Film at Lincoln Center, it was a 14-day retrospective that included his 16 feature films and five short subjects, each an example of his ability to “push the boundaries of sex, violence, and accepted good taste to daringly subversive ends.” The four Verhoeven films being added today to the Reeling Back archive (with links to each following the Afterword to this posting) include his unsettling exploration of the intersection of creative inspiration and sexual obsession, the Dutch-language feature that foreshadowed Basic Instinct, 1983’s The Fourth Man.

THE FOURTH MAN. Written by Gerard Soeteman. Based on Gerard Reve’s 1981 novel De vierde man. Music by Loek Dikker. Directed by Paul Verhoeven. Running time: 102 minutes. Restricted entertainment with the B.C. Classifier's warning: some gory scenes, nudity and sex. In Dutch with English subtitles. SHE IS YOUNG AND BEAUTIFUL, a wealthy widow and patroness of the arts named Christine Halsslag (Renée Soutendijk). He is the famous author Gerard Reve (Jeroen Krabbé), a controversial literary lion currently living off lecture fees.
Sensitive to what she thinks are his needs, she invites him into her life, her home and her bed. What bothers him is that her three previous lovers are all dead, a fate that he fears awaits The Fourth Man.
Reve, the film’s anti-hero, seems to have been born bothered. His story, adapted by screenwriter Gerard Soeteman from real-life Dutch novelist Gerard Reve’s suspense thriller, is a portrait of the artist as walking disaster area.
For Reve, creativity is a kind of curse. No fun guy, his mind is a seething mass of obsessions, fears, dark day dreams, horrific nightmares and violent premonitions.
Life is cheerless. If he goes for a walk along the beach, a bird will fall dead at his feet. He'll pass at least one messy traffic accident and see a drowning victim's body being pulled from the sea.
Far worse terrors lurk in his subconscious. When he lapses into post-coital slumber, he "sees" his lovely bedmate using a pair of scissors to unman him.
One is tempted to force a smile and say that director Paul Verhoeven is kidding. Reve's quasi-mystic torments are just too outrageous, and so it all has to be meant as black comedy. A look at the Dutch filmmaker's previous pictures, however, suggests that he really is a man with a nasty world view.
Verhoeven has taken such subjects as loathsome disease (Turkish Delight; 1973), prostitution (Katie Tippel; 1975) and teenage despair (Spetters; 1981) and offered audiences explicitly grim images of them all. His saving grace, then and now, is a powerful sense of story that proceeds from strong, if unusual, characters.
Here, we are shown a man who prolongs his relationship with a dangerous woman because of an overpowering homosexual obsession. At the same time, he is experiencing what to him are religious visions.
Verhoeven means for it all to be taken quite seriously. Absorbing and original, The Fourth Man is a flat-out psychological horror film.

Afterword: In his 2016 profile of Paul Verhoeven, online film critic Jacob Knight states the obvious: “He loves women, especially powerful ones, and the way they wield their respective sexualities as weapons. It’s just one of the many contradictions that mark his body of work as being utterly beguiling.” And it's true. With a single exception (1977’s Soldier of Orange), every one of Verhoeven's 17 feature films to date has at its centre just such a woman.
“I like women better than men,” he told the Guardian newspaper’s Eva Wiseman in a 2007 interview. Again, kind of obvious.Then he reminds us of his life beyond the movies. “I learnt a lot from my two daughters and my wife Martine . . . I had continuous support from her. In fact, Martine made the decision for us to move to the United States. When I rejected RoboCop because I thought it was silly, she read the script and told me she felt I could do something special with it.”
When I first read that, I felt an immediate debt of gratitude the former Martine Tours, the Dutch beauty that Verhoeven married in 1967. Knowing the history of Hollywood relationships, though, I was afraid of where the story was going. “We grew up in the 1970s, where there was absolute sexual freedom in our artistic world. There was no AIDs, the pill had just come in, women were autonomous, and we all had fun. We were part of that progressive experimental group, so we went our own way at times.” Trust Verhoeven to subvert your expectations. Earlier this year (2019), Paul and Martine celebrated their 53rd wedding anniversary. He’s currently in post-production on his 18th feature, Benedetta. Scheduled for release in 2020, it tells the story of a 17th-century Italian nun whose erotic visions guide her into a lesbian relationship.