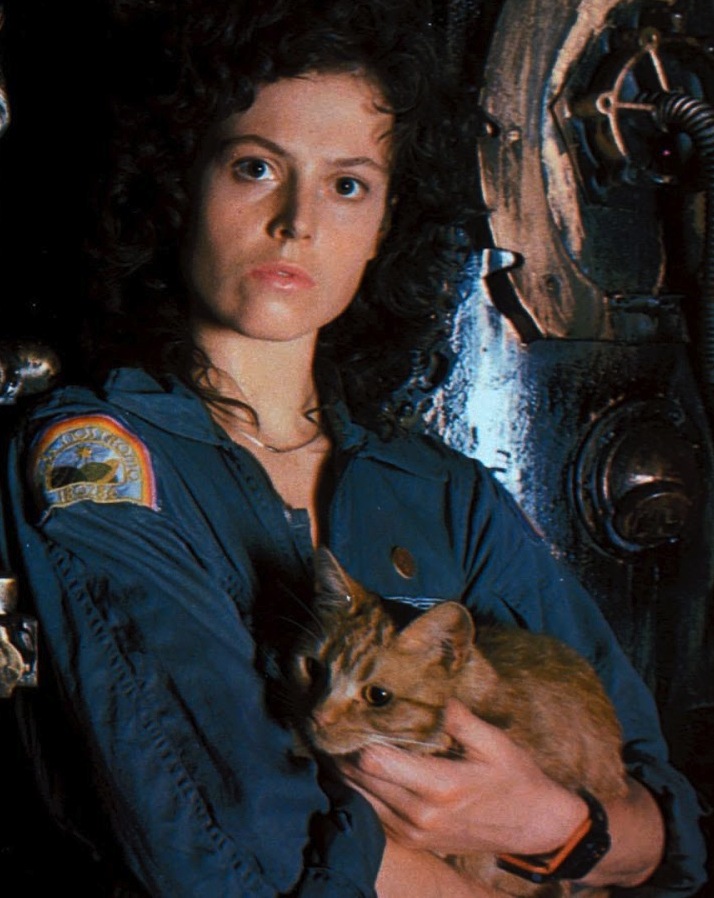 Alone aboard the Nostromo with her cat Jones, Ellen Ripley (Sigourney Weaver) considers her strategy for surviving an encounter with the Alien.


Some years ago, I became aware of a shocking true story. A young woman confided to me that she was an Alien Survivor. In the summer of 1979, her father had taken her to see Ridley Scott's deep-space horror film. Not yet three years old, the child had been told to concentrate on Jones, the ginger-coloured pussycat protected throughout by the capable Sigourney Weaver. It was one scary film, and she'd had nightmares for months thereafter. Until recently, I thought hers was an isolated case. Then I met another young woman with a similar story, one involving her dad, a home video cassette and nightmares. I've begun to wonder if we are not closing our eyes to a more widespread phenomenon, a condition that may be akin to post-traumatic stress disorder (PTSD). Aware of two examples, I fear that in the 35 years since the film's release there may have been many more. Just how many is a subject for further study, and perhaps a medical journal article. Given a name — Pre-Teen Extra-Terrestrial Exposure Trauma (PTETET) is my own modest proposal — the syndrome could inspire several TV doctor drama episodes, a Syfy channel movie, or even its own reality show. At the very least, there should be an Alien Survivor group on the Internet, a place to share stories and shame all those bad dads.

Friday, June 15, 1979
ALIEN. Written by Dan O'Bannon, based on a story by O'Bannon and Ronald Shusset. Music by Jerry Goldsmith. Directed by Ridley Scott. Running time: 117 minutes. Restricted entertainment. THE PROBLEM WITH SCIENCE-fiction films, say science-fiction fans, is that they’re not made by science-fiction fans.  The problem with science-fiction fans, say film makers, is that they don’t understand the realities of the movie marketplace.
These problems, thank goodness, are not insoluble. With Alien, the frightening new future-gothic thriller opening this week, a happy compromise has been struck.
Here is a project in which everything is done right. The right people with the right priorities came together at the right time and the result, like Star Wars, is a must-see film for the entire adult audience.
But, you ask, is it really like Star Wars?
The answer is no.
Star Wars remains unique. The top-grossing film of all time [in 1979], it was an adventure fantasy, a general-rated (PG in the U.S.) picture that left us all cheerful and elated.
Alien is a bit more of a gamble for distributor 20th Century-Fox (who also brought us Star Wars). Its purpose is to scare the hell out of an audience. It’s Restricted (U.S. and Canada).
The setting is deep space, approximately 100 years into a future in which multi-national corporations have become inter-stellar and their employees mine the galaxy to provide much needed raw resources for the Earth.
The story opens aboard the Nostromo, a commercial space-tug en route home with three huge oil refineries in tow. For most of the voyage, its five-man, two-woman crew has been in suspended animation, but the ship’s computer has decided to awaken them.
A signal has been detected. According to the rules of the game, any sign of intelligent life must be investigated. Though man knows that he is not alone in the universe, he has not yet made contact with any other sentient life form, and he longs to do so.
Well, mankind maybe. The crew of the Nostromo, on the other hand, have no burning desire for exploration. Individually, they couldn't care less.
They’re civilians, working folk employed by a huge corporation, and they respond because if they don’t, they will be fined heavily. What they don’t know is that they’re about to have a close encounter of the terrifying kind.
The times are right for a picture like Alien. Star Wars took the rollicking pulp fantasies of the 1930s and 1940s, added the kind of taste, talent, imagination and budget that most film buffs dream about, and produced a big winner.
Alien takes that process a step up the line. It enters the dark fears of the 1950s, an era in which the nuclear nightmare expressed itself through creature features, adds the important ingredients and offers us a screamer that is sure to make your deodorant fail.
The original idea came from Dan O’Bannon, a name known to the science-fiction folk. Together with fellow USC student John Carpenter, he was responsible for a marvelous little ($60,000) feature called Dark Star, a movie that has become a cult classic.
O’Bannon went on to do design work for George (Star Wars) Lucas, and was involved with Alejandro Jodorowsky’s ill-fated attempt to film Frank Herbert’s Dune.
Together with Ron Shusett, he then developed the story that would become Alien, a picture tentatively budgeted at $650,000. When he took his script around to the studio money men, he got a big surprise.
The times were right for a more ambitious approach. More sets, more special effects, more money. The picture’s final budget hovered around the $10-million mark, about what Lucas spent on Star Wars.
Fortunately, O’Bannon and his producers were able to agree on priorities. In a film designed to be scary, atmosphere — the look and feel of the thing — is all-important.
A crew of artists and designers with science-fictional interests and impressive graphic arts credits were hired — among them Ron Cobb and Jean (Moebius) Giraud. Biomechanical painter H.R. (for Hans Rudi) Giger was commissioned to create the creature.
Ridley Scott, a red-bearded Englishman with but one feature film to his credit (1978’s The Duellists, a story of Napoleonic warriors), was brought in to direct. A veteran TV commercial producer, Scott had an eye for atmosphere and knew how to time shock effects.
As in Star Wars, a cast of relative unknowns was considered desirable. Although Tom Skerritt, Veronica Cartwright, John Hurt, Ian Holm, Yaphet Kotto and Harry Dean Stanton all have an honourable list of film credits, none is a household word. Sigourney Weaver, a 30-year-old stage actress, makes her film debut in the picture.
When the Nostromo makes planetfall, Captain Dallas (Skerritt), executive officer Kane (Hurt) and navigator Lambert (Cartwright) don their pressure suits and set off for the source of the signal.
Warrant officer Ellen Ripley (Weaver), science officer Ash (Holm) and engineering technicians Brett (Stanton) and Parker (Kotto) remain aboard.
What the explorers find is a derelict space ship; a huge, ancient craft of non-human origin that contains a deadly secret. To tell more would be to ruin the fun by dulling a genuine shock.
The idea, says O’Bannon, is to scare everyone silly. By that measure, his Alien is a most successful film.

Afterword: Twentieth Century-Fox won its gamble, and Alien went on to become a franchise, generating three sequels and a pair of Alien vs Predator pictures. The best of them, of course, was Aliens (1986), the sequel conceived and directed by the Canadian-born hit-maker James Cameron. In that film, Sigourney Weaver's Ellen Ripley came into her own as a fully developed feminist hero. The third film, Alien 3 (1992), started with a script treatment by Vancouver writer William Gibson, and ended with Ripley's heroic death. The fourth film featured a screenplay by Joss Whedon. If he'd been displeased with the feature that resulted from his 1992 Buffy the Vampire Slayer script, he was scathing in his reaction to Jean-Pierre Jeunet's direction of  Alien: Resurrection (1997). Back in 1979, during a panel discussion at Vancouver's VCON science fiction convention, I said that Ridley Scott's film bore more than a passing resemblance to Italian director Mario Bava's 1965 feature Terrore nello spazio (shown in North American drive-ins as Planet of the Vampires). Since both Scott and screenwriter Dan O'Bannon have publicly denied ever seeing the earlier film, we can only conclude that the idea came to them in a nightmare.