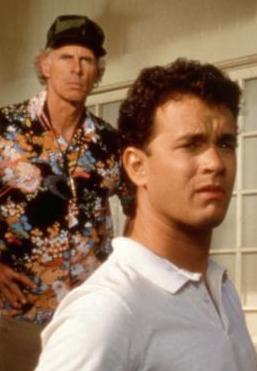 
Dealing with the neighbours from hell


Director Joe Dante understands the power that star performers bring to his live-action cartoon visions. He chose established screen villain Bruce Dern, who was born on this day (June 4) in 1936, to lend his lunatic presence to his 1989 tale of all-American community building, The ‘burbs.

THE ’BURBS. Written and produced by Dana Olsen. Music by Jerry Goldsmith. Directed by Joe Dante. Running time: 102 minutes. Mature entertainment with the B.C. Classifier’s warning: some coase language. IT'S BEEN A BEAUTIFUL day in the neighbourhood.
. . . followed by a tense evening and an explosive night. Down Mayfield Place in suburban Hinckley Heights the power is out, a house is in flames and pizzas litter the pavement.
“God!” enthuses teenaged Ricky Butler (Corey Feldman). “I love this street!”
He might just as well have said “Th-th-that’s all, folks!” Director Joe Dante's latest exercise in comic overstatement, The 'burbs, is yet another live-action cartoon.
In his Mayfield Place, a middle-American cul-de-sac, the squirrels all live in tract houses. Already brimming over with low-level nuttiness, the street goes completely insane the week Ray Peterson (Tom Hanks) goes on vacation.
In defiance of convention, Ray is determined to holiday at home. That’s his first mistake.
In the spirit of male camaraderie, he spends his time with his next-door neighbour, Art Weingartner (Saskatchewan-born Rick Ducommun), a bluff bozo with more imagination than good sense. That’s mistake number two.
Before long, Ray’s convinced that there’s something odd, even sinister about the Klopeks, the little-seen folk who moved into the unkempt, gothic-looking house next door on his other side. Are they, as he fears, “neighbours from hell”?
Such simple, disaster-laden mistakes are the stuff of Dante’s energetic, pop cultch cinema. On previous occasions such oversights have loosed Gremlins (1984) upon a small town’s Christmas celebrations, sent a trio of schoolboy Explorers (1985) into outer space, and a miniaturized astronaut into a grocery clerk’s Innerspace (1987).
In Explorers, the obvious clue to Dante’s animated comedy roots is the fact that his teenaged heroes are students at “Charles M. Jones Junior High.” In The ‘burbs, it’s composer Jerry Goldsmith’s spot-on score, a sound cartoon that uses familiar movie styles to heckle the onscreen characters and action.
Here, Dante provides us with a non-participant observer — Feldman’s ever-present Ricky — as a kind of chorus commenting on the central characters. “Did you ever see the movie The Sentinel?” he asks a nervous Ray early in the proceedings.
Rather than take the commonsense advice of his wife, Carol (Carrie Fisher), Ray involves himself with the suspicious Art and Mark Rumsfield (Bruce Dern), the xenophobic Vietnam vet from across the street. Together, they set out to expose the Klopeks' dark secrets.
Like the cartoons that Dante so obviously loves, The 'burbs offers a fragmentary narrative made up of one-liners, sight gags and physical humour. Unlike his previous flights of fantasy, this is a picture that relies on performers rather than elaborate special effects.
Hanks heads up an ensemble that includes powerful presences such as Dern, Fisher, Feldman, Henry Gibson (as the sinister Dr. Werner Klopek) and Gale Gordon. In them, Dante has a cast that knows how to make even silent moments pay off with laughter.

Afterword: I’ll never forget Clyde Gilmour’s late-1970s description of Bruce Dern. A master wordsmith, the Toronto Star’s veteran movie critic wrote that the Chicago-born actor had the look of “a demented horse.” It’s a look that’s served Dern well during a career now in its 58th year. To an earlier generation, he’s known as the man who killed the Duke. After a decade of playing a variety of murderers and madmen on TV and in the movies, he achieved stardom as Asa Watts, the long-haired killer who guns down John Wayne’s Will Anderson character in director Mark Rydell’s The Cowboys (1972). Personally, I preferred his other 1972 break-out role, that of Freeman Lowell, the eco-conscious astronaut in Douglas Trumbull’s science-fiction classic Silent Running. Dern went on to earn his first Academy Award nomination (for best supporting actor) playing the deeply troubled Vietnam veteran Bob Hyde in director Hal Ashby’s much-honoured 1978 drama Coming Home. Thirty-five years later, he was nominated for a best actor Oscar for playing Woody Grant, a proud senior struggling with dementia in Alexander Payne’s Nebraska (2013).
A later generation probably remembers him as Laura Dern’s father. (Her mother was Dern’s second wife, actress Diane Ladd.) Though he’s never stopped working, his roles are almost always in support of a bigger name star. In his 2007 autobiography, Things I’ve Said but Probably Shouldn’t Have: An Unrepentant Memoir, he recalls the lessons he learned working with director Michael Ritchie on his 1975 beauty pageant comedy Smile: “Comedy is not about appearing funny, so the more honestly you play it, the better it is.” For Joe Dante’s The ‘burbs, he found the comic honesty in his familiar “demented horse” persona. Later this year, he will be seen as American political clan patriarch Joe Kennedy in director John Curran’s theatrical feature Chappaquiddick. Bruce Dern turns 81 today (June 4).