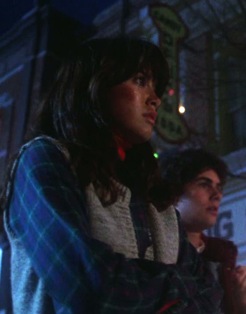 Kate (Phoebe Cates) takes a winter walk with her boyfriend Billy (Zach Galligan), who is unaware that she'll soon tell him the most bizarre Christmas story he's ever heard.


Setting out a seasonal cinema buffet


On the third day before Christmas, my TV gave to me . . . Continuing with a list of movies, checked over twice, containing titles both not-my-cup-of-tea and nice. I've chosen an even dozen from the pool of productions endlessly rebroadcast during our ever longer Yuletide. Today (Dec. 22), recovering from the downbeat Nobody's Fool (1986), Reeling Back recalls 1984's frenetic Gremlins. You may wish to click the Read More button now, though, as I'm going to take time out to repeat my holiday rant. Although I don't buy any of the "war on Christmas" nonsense peddled by the Fox and Sun news networks, I do regret the front-loading of the season at the expense of the traditional 12 Days of Christmas. The modern mercantile version of the season-to-be-jolly has repositioned December 25, making what was once the First Day of Christmas, the last. Thereafter, it's on to the "after-Christmas" sales. What's been lost is the winter solstice moment, that midwinter festival recognizing the rebirth of the land that comes after the year's longest night. It lasts until Twelfth Night (Jan. 5) and makes good sense regardless of your religious beliefs. It also comes closer to my idea of a merry Christmas.

Friday, June 8, 1984
GREMLINS. Written by Chris Columbus. Music by Jerry Goldsmith. Directed by Joe Dante. Running time: 104 minutes. Mature entertainment with the B.C. Classifier's warning: young children will be frightened; some violence and occasional swearing. "MOVIES," DIRECTOR JOE Dante said one year ago in an interview, "are certainly made now by people more sophisticated than the people who used to make them.
"But," he added, "they seem to be aimed at people who are less sophisticated." Which brings us to Dante's latest, a nifty little number called Gremlins.
A certified cinema sophisticate, Dante, 34, is one of those persons who thinks in images rather than words or emotions. In Gremlins, he refers to, recalls, suggests and quotes from more movies than the average adult sees in a year.
Take, for example, the character of Ruby Deagle (Polly Holliday), Kingston Falls' most miserly mortgage holder and the owner of a pair of ruby red slippers. When she makes her entrance, her walk, her bearing and her expression all cry out Elvira Gulch!
Now, everybody knows that Miss Gulch, as played by Margaret Hamilton in 1939's The Wizard of Oz, metamorphoses into the Wicked Witch of the West. Dante's visual reference becomes a quote when Mrs. Deagle threatens harm to the picture's young hero, Billy Peltzer (Zach Galligan), "and your dog, too!"
Here's a film that will send movie buffs into seventh heaven. At the same time, it should appeal to older kids, teens and other people with short attention spans.
The reason is that Dante is not telling a story so much as selling an idea. Gremlins, Murphy knows, are real. They take pleasure in chaos. They enforce his law, making sure that anything that can go wrong, will.
Billy and his  girlfriend Kate (Phoebe Cates), his mom (Frances Lee McCain) and his lovingly wacko dad (Hoyt Axton) are little more than a warm-up act. Undeveloped as characters, they're there to set the scene and react to Gizmo, a super-cute special effect identified as a "mogwai" (related, perhaps, to the "moogie" of Ozark legend).
No ordinary house pet, a mogwai must be shielded from bright light, kept away from water and never fed after midnight.
Rules like these are made to be broken, of course.
When they are, the consequences are appropriately dire. Gizmo replicates, and his clones are nowhere near as nice. Eventually, they turn downright ugly.
Manic and malicious, gremlins live for laughs. Their antics turn an all-American small town's Christmas celebration into a destruction derby, one that is by turns frightening and hilarious.
With Steven Spielberg overseeing the project (as executive producer), Dante had access to all the magic that state-of-the-art special effects artists could muster. He takes it right over the top to give us the 1941 of creature features.

Afterword: In a quiet moment before the hyperactive Gremlins finale, Billy's girlfriend Kate confides to him why she hates Christmas. Completely unexpected in a comedy, her confession is horrific and riveting, creating an unforgettable movie moment.
"The worst thing that ever happened to me was on Christmas," she says. "Oh, God. It was so horrible.
"It was Christmas Eve. I was nine years old. Me and Mom were decorating the tree, waiting for Dad to come home from work. A couple hours went by. Dad wasn't home. So Mom called the office. No answer. Christmas Day came and went, and still nothing. So the police began a search.
"Four or five days went by. Neither one of us could eat or sleep. Everything was falling apart. It was snowing outside. The house was freezing, so I went to try to light up the fire. That's when I noticed the smell. The firemen came and broke through the chimney top.
"And me and Mom were expecting them to pull out a dead cat or a bird. And instead they pulled out my father. He was dressed in a Santa Claus suit. He'd been climbing down the chimney . . . his arms loaded with presents. He was gonna surprise us. He slipped and broke his neck. He died instantly.
"And that's how I found out there was no Santa Claus."
The macabre moment seemed atypical of director Joe Dante and, moments after delivering that narrative wallop, his movie returns to the non-stop cartoon humour that made the movie No. 4 on the list of top-grossing films of 1984.