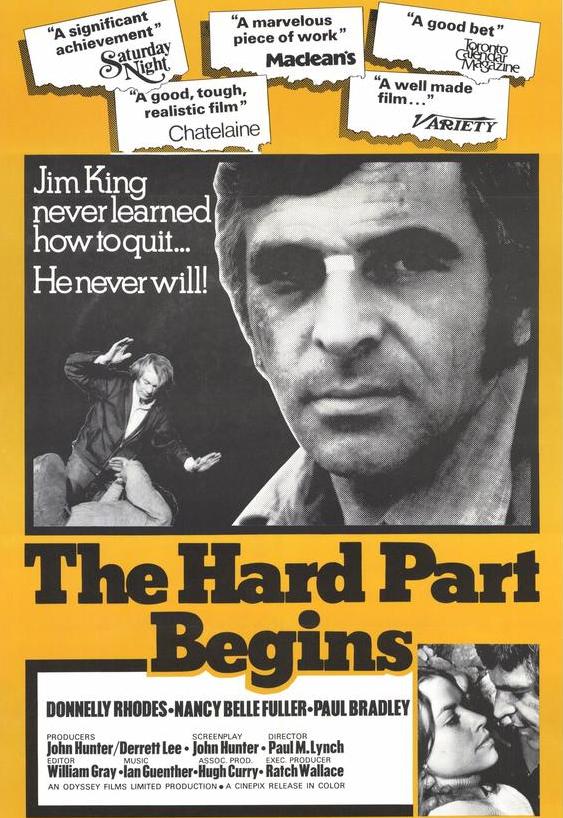 
With authentic mood and gritty reality


On this day (November 7) in 1995, Shania Twain’s album The Woman in Me went triple platinum. Canada’s country-pop queen started out singing in Timmons, Ontario bars in 1973, the year that The Hard Part Begins, director Paul Lynch’s tale of Jim King’s life on the road, was released.

THE HARD PART BEGINS. Written by John Hunter. Music by Ian Guenther. Directed by Paul Lynch. Running time: 90 minutes. Mature entertainment with the B.C. Classifier’s warning: occasional coarse language. ROCK IS AN URBAN sound. Jazz suggests sophistication. Even Folk has acquired a high-toned, collegiate air.
By contrast, Country and Western music seems to be fighting a rearguard action on behalf of traditional values, simple sentiments and small-town problems. By extension, the C&W scene is well-suited to stories about changing times and shifting responsibilities.
Jim King (played by the ruggedly handsome Donnelly Rhodes), the central character in director Paul Lynch’s The Hard Part Begins, is a hard-working C&W singer, not so much a hero of the scene as its victim. On the surface, he leads a glamourous life.
The leader of his own group, King and Country, he is loved by his strikingly attractive singing partner Jenny Frame (Nancy Belle Fuller). For a bit of added spice, he manages to enjoy the pursuit of the occasional groupie.
Director Lynch takes a more realistic approach. Viewed in perspective, King is a beer-parlour bandleader. The owner of an aged Volkswagen van, he is an aging Lothario — “I’ve come to think the future is for people who are 20 years old” — who is feeling worn, if not worn out.
Overall, his problems are reminiscent of Payday, veteran TV director Daryl Duke’s award-winning first feature. Duke’s 1972 film was an incisive, ultimately bitter portrait of a hard-driving self-centred singer on the road in the American South.
Like Jim King, Maury Dann (Rip Torn) played tank towns and played with groupies. Though he travelled with a steady mistress, he occasionally checked in with his divorced wife to see how their son was getting along.
Like Duke, director Lynch trained in Canadian television, a background that might account for the fact that both projects have a rich, documentary-like flavour, a feeling for authentic mood and gritty reality. In both cases, the effect is enhanced by players who seem to be living, rather than acting, their roles.
Where the films are dissimilar is in their attitudes toward their heroes. Although Dann plays Country, he lives in the hype-lands of the Pop world.
King is drawn more sympathetically, a performer who is less like his music. He enjoys the freedom of the road, down-home honesty in his relationships and the spontaneity of his lifestyle. Walking beside a river in which he once swam nude, he tells Jenny that “we used to think nothing of driving 100 miles to play for $20 and beer."
“I wish I’d known you then,” she says wistfully.
“I’m nicer now,” he replies. “I’m more dependable.”
King’s story, written by John Clifford Hunter, is a  variation on the old show business theme — Breaking into the Big Time — here represented by a recording contract. Predictably, when the time comes to talk terms, entrepreneur Justin Boyd (Hugh Curry) wants to make Jenny a star single.
King is not interested.
“We’re talking about some big bread here,” Boyd insists.
“I know,” says the weary musician. “But we’re a group.”
It’s a brave lie.
King’s drummer, a young long-hair named Lou Roxton (Robert Hawkins), is getting tired of what he calls “windbreaker music,” and is offended when he notices that “some dude barfed on the dance floor.” He is seen in conspiratorial conversation with some rock bandsmen.
Jenny, hurt by King’s casual affairs, is on a fine edge of anger. Only Duane Eccles (played in fine crackerbarrel style by Paul Bradley) is really working to keep it all together.
Lurking in the background is a vengeful local named Al Dawson (Bradley’s Goin’ Down the Road co-star Doug McGrath), who is sure that King once impregnated his sister.
The Hard Part Begins is a song — one of several written for the film by Ian Guenther — the picture’s title and a fair summation of its theme. Honest and well-acted, it is a hard film not to like.

Afterword: For the Winnipeg-born Donnelly Rhodes, playing a country singer in The Hard Part Begins was a farewell of sorts. Trained as a stage actor, he found his way to Hollywood in the early 1960s, signing on as a Universal Studios contract player. Between 1960 and 1973, he had supporting roles in dozens of TV series, including just about every Western on the air. (He also appeared briefly the 1969 theatrical feature, Butch Cassidy and the Sundance Kid, in a scene where his character menaces Robert Redford’s Kid.) By the time he played Jim King, his first feature-film starring role, his days as an American cowboy were pretty well done.
In 1973, as the picture’s executive producer Ratch Wallace told me in an interview, financiers were starting to take domestic filmmaking seriously. Rhodes, who’d already paid a visit to Halifax to play a supporting role in an ambitious Canadian science-fiction feature called The Neptune Factor, entered a new phase of his career that involved working regularly on both sides of the border. Noting his passing in a January 2018 obituary,  the New York Times told its readers that was he was a “character actor best remembered by American television audiences for playing an escaped convict on the sitcom Soap [1980-1981] and a brusque doctor on the recent reboot of Battlestar Galactica [2004-2009].”
In Canada, he's remembered as the Vancouver Aquarium’s Grant “Doc” Roberts, the kindly marine biologist who made environmental protection his mission during six seasons of CBC-TV’s Danger Bay (1985-1990). Or, more recently, as Vancouver Police Detective Leo Shannon, a series regular during the seven seasons of Da Vinci’s Inquest (1998-2006). The 60-year career of Donnelly Rhodes — for whom Vancouver became home in 1984 — is well summarized in this Globe and Mail tribute by Martin Morrow.