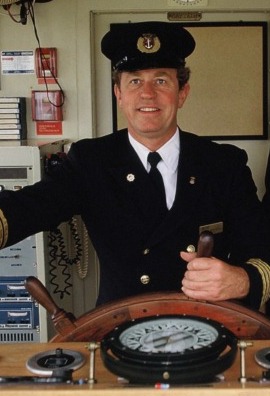 A success in his second career as a ship’s captain, RATCH WALLACE is seen here at the helm of the Canadian Empress.

The hard part is behind us


Believing in a better future for film


During his first career as an actor, producer and screenwriter, Ratch Wallace was a Canadian cinema pioneer. Born on this day (November 7) in 1944, he sat down with me in 1975 to discuss his then-current project, director Paul Lynch’s feature The Hard Part Begins.

THE HARD PART WAS 1974.
Last year, after nearly six years of steady acceleration, the Canadian feature film industry seemed to slip out of gear. Ideas were scarce and money was scarcer.
Now, says Ratch Wallace, executive producer of The Hard Part Begins, "the hard part is ending." According to the Toronto-born moviemaker, the Canadian film scene is changing for the better.
A bad year was a good thing.
"Sure, it was a very bad year last year," he said in a Vancouver interview. "But it was also useful as a year of introspection and reflection. Just because we all had to wait — everybody had to pull back — you could go back into your house, go home to your wife and wonder just who in hell you were.
"Who am I? I’m not out there like a car salesman working every day and getting my money back. Am I a picture maker? All right, if I am, how do I get the car salesman's money?
“You have to think about it that way. That's the very hardest part."
Canadian filmmakers have to realize the "great differences between Hollywood and Canada," he said. "Hollywood is a place where people make movies for a living. The whole city is built on entertainment, on show business and on the business of making movies."
By contrast, he said, Canada is a place where "the original mentality is not a movie-making mentality. To this day Canadian investors don't really think of show business as a business. Americans can see it as a major avenue for making money. Canadians still think of it as a somewhat frivolous enterprise."
Wallace's first contact with the "frivolous enterprise" was working as a stage sweeper in Toronto's Royal Alexandra Theatre. He moved up to become a house manager and finally an actor.
Shortly afterward a friend talked him into sailing around the world. Wallace headed for Vancouver to meet him, but the friend was late by about nine months.
In the meantime, 23-year-old Toronto director David Secter offered Wallace the starring role in his second feature film, 1966’s The Offering.
That, said Wallace, "started the chase. After being a star once, you're into it."
Since then he has appeared in five other feature films, including the three that director Paul Almond built around his then-wife Genevieve Bujold (1968’s Isabel, 1970’s Act of the Heart and 1972’s Journey).
From there, it was just a short leap into movie production. In 1971, he wrote, produced and directed The Match, a theatrical short that is still in release [1974]. The market for theatrical shorts is severely limited, though, so the next logical step was into features.
"I wrote seven feature scripts, and threw them all out," he said. Finally, he developed a property he liked, and put together a company to finance it. There was only one problem.
"The CFDC [Canadian Film Development Corporation] didn't like it.”
A friend of Wallace's, TV director Paul Lynch, had a similar problem, but in reverse. "'Listen,' Lynch said to me. 'You've got some money. I've got a small project that the CFDC has accepted.'"
The result was The Hard Part Begins, the story of a middle-aged country and western singer, played by Donnelly Rhodes, who has to face up to a major crisis in his career.
One of the reasons Wallace sees better times ahead is because "the people making films now are a lot sharper than they were two years ago. There was a scare last year after the ice cream days of a few years before.
"I hope that people are not going to make films just to have one made and so that they can be a producer. And I don't think they are. I think they're only going to make films if they can do — either be the best entertainment movie on the block, or the most astonishing insight picture made in years."
Until now "the problem has been making imitations of entertainment pictures." He cited Gerald Potterton's The Rainbow Boys and Don Shebib's Between Friends (both 1973) as examples of films that failed to decide whether they were offering audiences insight or entertainment.
"The other thing is that this country is short on screenwriters. There are a couple of men, like Bill Fruet (who wrote and directed 1972’s award-winning Wedding in White), who lead the list. If this country could afford to keep them in good shape, they could probably turn out as many damn good screenplays as Dalton Trumbo did during his era.
"The problem is keeping them going. But there has always been this gap (between projects) and you wonder 'why am I sitting at home writing when I could be out making a living?'
"There are people who are rich writers in Canada, like Pierre Berton. There are people who are good writers but not rich, like Farley Mowat. But none of those guys came through an era that had anything to do with making films.
"The screenwriters are going to have to come out of this era," Wallace said. "They're not going to come out of the (Toronto-based publisher) McClelland and Stewart stream. The guys who were selling books are interested in writing television plays, and a television play written for the (Canadian Broadcasting) Corporation or radio is light years away from a screenplay."
If the screenwriters emerge and if the film financiers really are more serious and sophisticated, the problems of distribution and exhibition will solve themselves, he said.
"In  this  business  there are no real villains.'' he said. "All that's needed is the collective understanding of what the industry can be. Now is the time for each producer, each screenwriter and each financier to carefully think through every project they become involved with.
“The hard part is behind us."

The above is a restored version of a Province interview by Michael Walsh originally published in 1975. For additional information on this archived material, please visit my FAQ.

Afterword: At the time of our conversation, the 30-year-old Ratch Wallace was representative of a dynamic new generation of Canadian feature-film pioneers. In addition to the four films mentioned in the above review, he acted in director John Board’s 1972 frontier comedy The Merry Wives of Tobias Rouke, and John Trent’s crime thriller Sunday in the Country (1974). A year after our chat, the screenplay that Wallace said that he had written and liked went before the cameras in central Ontario. Directed by Alan Bridges, Ragtime Summer (also known as Age of Innocence), was a Canada-U.K. co-production that starred David Warner and Honor Blackman.
As it happened, Wallace’s life was to change course in the 1980s. In the above interview, he said that he’d been cast in his first starring movie role while waiting on a friend with whom he was going to sail around the world. Later, during his film career, he made the acquaintance of Hollywood actor, mariner and novelist Sterling Hayden, with whom he shared an interest in the sea. It became a serious pursuit for Wallace, and he entered the officer training program at Owen Sound’s Georgian College, eventually earning his Master Mariner certification.
In 1999, after a decade-long career as a St. Lawrence cruise-ship captain, he relocated to the West Coast, joining B.C. Ferries as its vice-president of operations and acquisitions. To his friends in the maritime community he was known as “Captain Hollywood” and, following his mandatory retirement from the B.C. fleet, he resumed his previous command of the Canadian Empress on Ontario's St. Lawrence River. Ratch Wallace collapsed and died on the bridge of his ship in the early hours of October 16, 2011. Memorial services were held in Toronto and Victoria. He was 66.