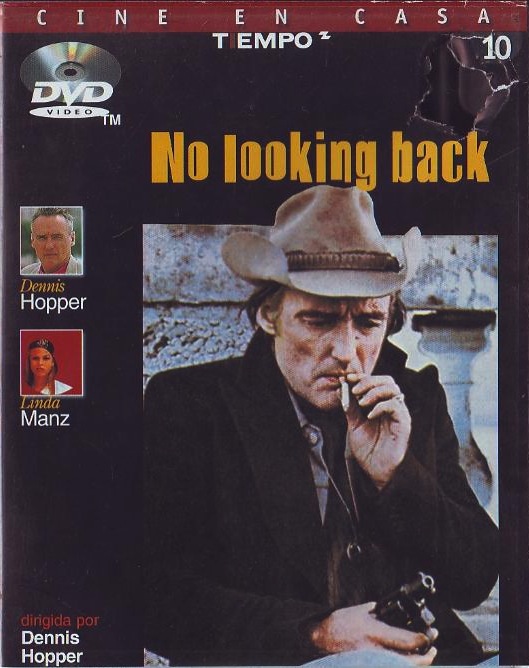 Filmed in Vancouver as CeBe, this troubled 1980 feature made its debut at the Cannes Film Festival as Out of the Blue. When it finally reached Vancouver in late 1983, it had the title No Looking Back.

A lost girl in a lost film


Born on this day (May 21) in New Westminster, B.C., actor Raymond Burr is best known as the crusading defence attorney Perry Mason. Less known is his turn as a psychiatrist in a Vancouver-made feature, 1980's No Looking Back.

Wednesday, December 7, 1983.
NO LOOKING BACK. Filmed as CeBe (1979). Also released as Out of the Blue (1980), Co-written by Leonard Yakir, Brenda Nielson and Gary Jules Jouvenat. Music by Tom Lavin and Neil Young. Co-written and directed by Dennis Hopper. Running time: 91 minutes. Restricted entertainment with the B.C. Classifier's warning:  frequent very coarse language, occasional violence, nudity and suggestive scenes. CINDY "CEBE" BARNES (Linda Manz) is a different kind of valley girl.  A bad seed fallen on hard ground, she knows the day she crosses the Port Mann Bridge that there is No Looking Back.
Dad, an alcoholic ex-trucker named Don (Dennis Hopper), is also an ex-con. He's just served a five-year stretch for taking out a stalled school bus with his 18-wheeler while under the influence.
Mom is a drug-addicted roadhouse waitress named Kathy (Sharon Farrell). "There are two kinds of men," she tells her 15-year-old daughter. "Wild and sexy dancing men, and your providers."
Crossing that bridge, CeBe experiences the larger reality of men, music and urban angst. The closest she gets to a positive role model is Dr. Brean (Raymond Burr), the kindly psychiatrist who attempts to counsel the troubled teen during her brief contact with the social services system.
Made here [Vancouver] as CeBe, No Looking Back was screened in competition at the 1980 Cannes Film Festival as Out of the Blue. Initially denied Canadian certification by Ottawa's near-sighted cultural czars, it had the distinction of playing the festival without official nationality.
Entirely financed in Western Canada, the picture is set in a clearly recognizable Vancouver. Featured are the Ridge Theatre, Eric Hamber Secondary School, innumerable stubby beer bottles and a performance by the Pointed Sticks punk-rock band.
Even so, the feds self-righteously snorted that it wasn't true "Canadian" (read "Toronto") culture. This, mark you, from the same clowns who have bestowed their bureaucratic blessings on such exemplars of the national anima as Screwballs (1983), Spring Fever (1982) and the ever-popular Death Ship (1980).
At the centre of the storm was Dennis Hopper, an American actor whose career was built on youthful resentments. Between his screen debut in Rebel Without a Cause (1956) and his directorial debut with Easy Rider (1969), he hung out with the guys making movies for exploitation director Roger Corman — Peter Fonda, Jack Nicholson and Francis Ford Coppola.
When Hopper took over as director from No Looking Back's Canadian screenwriter Leonard Yakir, all hell broke loose in the Eastern offices of the Canadian cultural Establishment. In retrospect, his picture's bleak, dead-end outlook nicely captures the cultural alienation faced by both a generation and a region living outside an officially designated "centre of excellence."
Here, Hopper foreshadows Coppola's return to their teen exploitation roots with his S.E. Hinton adaptations. A rougher, nastier vision than 1983's Rumble Fish, Hopper's nihilistic picture offers Manz, a female Matt Dillon, who tells us that her problem is that "Elvis died on me."
What CeBe needs is a role model. She rejects her mother's  dependent, sex-centred brand of femininity, and has elevated her absent father into a kind of punk rebel sainthood.
Only when dad returns does she see him for what he really is: a sick, sad, self-destructive psychotic. An unpretty urban melodrama, No Looking Back is a slice of defiantly unofficial Canadian culture.

Afterword: Born in 1917, Raymond Burr made his Hollywood film debut in 1946 as a supporting player in B movies. Before 1957, he was best known for co-starring opposite James Stewart (as the villain in Alfred Hitchcock's 1945 thriller Rear Window) and Godzilla, King of the Monsters (1956). His breakthrough came on television, where he played Los Angeles defence attorney Perry Mason for nine seasons (1957-66). He followed that with an eight-season run as the San Francisco police detective Ironside (1967-75). In 1985, he did his second Godzilla feature, and returned to the Mason role in a made-for-TV movie called Perry Mason Returns. Its success resulted in a series of 25 more, made between 1986 and 1993, with the first two — The Case of the Notorious Nun and The Case of the Shooting Star — filmed in Vancouver. In 1987, the franchise would move to Denver, Colorado, its home for 23 more features. In addition to his appearance in CeBe/Out of the Blue/No Looking Back, he visited B.C. to co-star in Showdown at Williams Creek,  a 1991 western originally titled The Legend of Kootenai Brown. The chequered tale of No Looking Back's 1979 production in Vancouver is a story that Reeling Back will tell at another time.