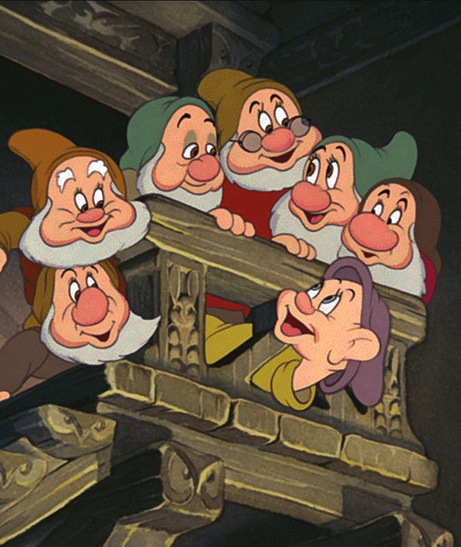 
Walt Disney chose today (December 21) the shortest day of 1937, to premiere his first feature-length cartoon, a film with an ensemble of charmingly short supporting players — Snow White and the Seven Dwarfs

Thursday, July 16, 1987
SNOW WHITE AND THE SEVEN DWARFS. Written by Ted Sears, Richard Creedon, Otto Englander, Dick Rickard, Earl Hurd, Merrill De Maris, Dorothy Ann Blank and Webb Smith. Based upon the works of Jacob and Wilhelm Grimm. Music by Frank Churchill, Leigh Harline and Paul J. Smith. Directed by William Cottrell, David Hand, Wilfred Jackson, Larry Morey, Perce Pearce and Ben Sharpsteen. Running time: 83 minutes. General entertainment.
By PAULINE WALSH
Guest Critic
HEIGH HO, HEIGH HO, it's off to the cinema we go! Snow White is back with her dwarfs and her furry and feathered friends.
It's Snow White's 50th anniversary and she's here to celebrate it with us. This is the first time I've ever seen her, and I liked her as much as Bambi, Cinderella and Peter Pan.
Snow White is a princess who has to work as a scullery maid. Her stepmother, the Queen, is very vain and doesn't want anybody to know that her stepdaughter is more beautiful.
Snow White runs away in a panic when the Queen tries to kill her, and sees all sorts of hallucinations in the forest. She meets some animals and they lead her to the cottage where the seven dwarfs dwell.
The animals were so well drawn that I wanted to reach out and pet them, especially the rabbits and the chipmunks. I liked the dwarfs, too, except when they looked as if they were supposed to be drunk! Their noses were much too big!
All of the good characters in the movie sing and dance. For instance: Snow White sings "Whistle While You Work'' and the dwarfs sing "Dig, Dig, Dig." Evil ones like the Queen and her raven only snarl and hiss.
My favourite character is Dopey, because he is very dopey and is always trying to kiss Snow White, right up to the end of the movie.
He is especially funny when he goes up to the dwarfs' bedroom to see who's in the house. When he comes back downstairs, he has to explain without words what was in their beds.
"What was the monster doing?' asks one of the dwarfs.
"ZZZZZZZZZZZZ," says Dopey.
Some scenes, like the Queen's transformation into an old hag, may be scary for smaller children. All in all, I think everybody will enjoy Snow White and the Seven Dwarfs.

SNOW WHITE IS 50 and, though it pains me to say it, Walt Disney's fairy tale princess is showing her age.
It's not that she is any the less charming.
A landmark in the history of animated film, her story is still every bit as joyous and moving, as frightening and funny as it was on December 21, 1937, the day of her Los Angeles debut.
The inventive Disney had gambled that the world was ready for a feature-length cartoon. He gambled big. Snow White and the Seven Dwarfs cost his cash-strapped studio an unheard of $1,488,423, nearly five times its original estimated budget.
Three years in the making, "Walt's folly" was a sensation. During its first year in release, it earned more than $8 million. (According to Variety, its rental income to date [1987] stands at $41,400,000.)
At the 1938 Academy Award ceremonies, child star Shirley Temple presented Disney with a special award. It consisted of a full-sized Oscar and seven miniature ones, a unique honour recognizing his "significant screen innovation which has charmed millions."
A work of art as well as entertainment, Snow White remains a classic. As beloved by filmgoers as Casablanca, Gone With the Wind or The Wizard of Oz, its special magic is undiminished by time.
What has aged, though, is Disney's corporation, an enterprise once famous for its quality control. The print previewed locally lacked colour definition, displaying the sort of minor picture deterioration that can happen when films are rushed out of the laboratory in job lots.
This year, Disney's heirs are determined to set new records with his great breakthrough feature. They claim that its anniversary re-release in 60 countries (with simultaneous playdates in the U.S.A.. the U.S.S.R. and China) is a motion picture first.
A mighty undertaking, its achievement may be at the cost of Walt's perfectionism and unfailing pride in his product. It is here that the literal greying of his princess is taking place.
Fortunately, her sparkle and vitality continues to shine through, making it a must-see movie for all ages.

The above is a restored version of a Province review by Pauline Walsh with a news feature by Michael Walsh originally published in 1987. For additional information on this archived material, please visit my FAQ.

Afterword: As every parent knows, our children offer us the opportunity to see our old world through new eyes. From time to time during my years as a working critic, I felt the need of a fresh perspective on items of special interest. On those occasions, I would turn over the column to my own little princess, who (for better or worse) grew up in Vancouver's cinemas, seeing more movies than the average kid. At ten, she provided Province readers with her reaction to what was a new picture for her, the classic Snow White and the SevenDwarfs. Five years after venturing into Disney's enchanted forest, she took on the challenge of Buffy Summers's Sunnydale, reviewing 1992's Buffy the Vampire Slayer.