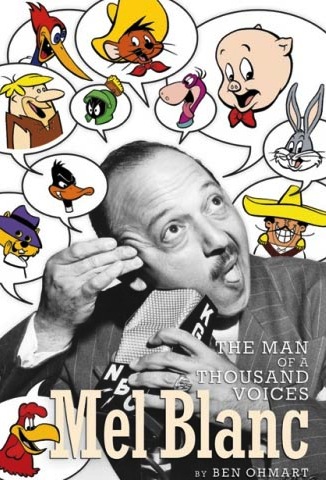 A man for rabbit season


Tooning into the best of Blanc


During his 60-year career in radio and motion-picture sound studios, Mel Blanc was known as "the man of a thousand voices." Born on this day (May 30) in 1908, Blanc was best known for his Warner Bros. cartoon creations, the stars celebrated in The Bugs Bunny Film Festival.

Friday, July 23, 1993.
THE BUGS BUNNY FILM FESTIVAL. A presentation of Termite Terrace Films (Acme Animation Art Gallery Ink. of Vancouver; James Coleridge). Consists of 15 Looney Tunes and Merrie Melodies produced by Warner Brothers between 1949 and 1961. Rated General entertainment. THEY WEREN'T LOVEABLE.
Between 1930 and 1969, Warner Brothers animators produced about 850 cartoon shorts for theatrical release. There wasn't a Care Bear in the bunch.
Bugs Bunny, Daffy Duck, Porky Pig, Pepe Le Pew, Elmer Fudd, Yosemite Sam, Sylvester Q. Pussycat, Foghorn Leghorn, Marvin the Martian, Michigan J. Frog, Henry Hawk, Tweety Bird — they didn't teach cute little lessons, provide role models or make kids feel good about themselves
They made us laugh.
Pure and simple.
Well, not so simple, actually. The wit of Warners at its best was an awesome combination of character, timing, Mel Blanc's vocal skills, Carl Stalling's musical humour and ingenious animation.
Before television and the Hanna-Barberians reduced them to Saturday morning babysitters, cartoons had character.
They were something adults shared with kids in movie theatres, seven-minute-long islands of inspired anarchy that ran between the features.
The best of them were the Looney Tunes and Merrie Melodies made for Warners by marvelous madmen like Chuck Jones, Bob Clampett, "Friz" Freleng, Robert McKimson, Frank Tashlin and the immortal Tex Avery. Their characters just had more character than any other studio's cartoon performers.
Unlike Disney's Mouse, reduced by his own success to the role of suburban simp, the Bunny never lost his attitude or his edge. With his Brooklyn accent and Groucho Marx personality, Bugs remains animated cartooning's greatest creation.
Television, with its content editing and marketing imperative, diminishes the honesty and impact of made-for-the-theatre cartoons. That's why I'm recommending a trip to The Bugs Bunny Film Festival.
Organized by Vancouver's James Coleridge, founder of the Acme Animation Art Gallery, it consists of seven Looney Tunes and eight Merrie Melodies made between 1949 and 1961. Though the prints are brand new, some of the titles are genuine classics.
Two of the Bunny's best are on view. In Bully for Bugs, directed by Jones, he makes that wrong turn at Albuquerque and finds himself at war with half a ton of angry hamburger.
Duck! Rabbit, Duck!, also a Jones picture, has the Bunny being "desth-picable" to hapless Daffy Duck.
The Duck is more evenly matched (with the militaristic Marvin the Martian) in Star Wars director George Lucas's favourite Jones work, Duck Dodgers in the 24½ Century.
Then there is Jones's masterpiece, One Froggy Evening. A parable of greed and desperation, it stars Michigan J. Frog, a terrifically talented amphibian with demonically funny timing.
And there's more, 15 titles in all, with appearances by everybody except the overexposed Wile E. Coyote and his Roadrunner nemesis. The Bugs Bunny Film Festival is what's up, Doc.

Afterword: The first voice actor to receive screen credit (the result of a 1942 contract negotiation with producer Leon Schlesinger), Mel Blanc didn't just speak lines, he created characters. A regular on radio's Jack Benny Program, he joined Warner Bros. cartoon producer Leon Schlesinger Productions in late 1936. After establishing himself as the stuttering Porky Pig (contributing the signature line "Th . . . uh-th . . . uh-th . . . that's all folks!"), and lisping, desth-picable Daffy Duck, he suggested renaming the studio's nondescript Happy Rabbit. Blanc gave the redesigned character a brash, Brooklyn accent and ad-libbed the snappy greeting "eh, what's up, Doc?" Thus did Bugs Bunny make his screen debut as The Wild Hare (1940). Although Blanc was able to make a smooth transition to television — his work for Hanna-Barbera included the voice of Flintstones character Barney Rubble — he will forever be remembered as the pre-eminent voice talent of animation's golden age. ''What we tried to do was amuse ourselves," he said in a 1985 New York Times interview. "We didn't make pictures for children. We didn't make pictures for adults. We made them for ourselves.'' Mel Blanc died in 1989 at the age of 81. His final work was recording the voices of Bugs, Porky, Daffy, Tweety and Sylvester for director Robert Zemeckis's 1988 feature Who Framed Roger Rabbit.