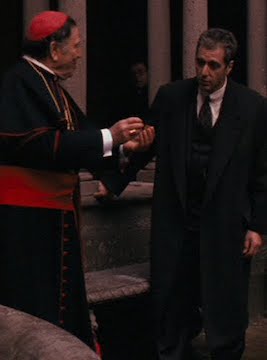 
Could we be less excited about the upcoming 2022 Academy Awards ceremonies? For the past week, pop culture mavens have shown far more interest in the 50th anniversary of director Francis Ford Coppola’s The Godfather, released on this day (March 24) in 1972. I can’t say they’re wrong. The product of a significant generational change in Hollywood, it won critical praise, set boxoffice records, and took the year’s Best Picture Oscar. Quotable to this day, Coppola’s picture tells the story of dynastic change in a New York crime family. Consider the enduring relevance of the scene in which the title character’s war hero son tells his girlfriend that “My father is no different than any powerful man, any man with power, like a president or senator.” Shocked at the comparison, she says “Do you know how naive you sound, Michael? Presidents and senators don’t have men killed.” He responds with the simple truth. “Oh. Who's being naive, Kay?” A half century along, and no one can say that he’s wrong. Today’s Reeling Back package completes my coverage of the Corleone family by adding the two follow-up features (with links to the others following the Afterword to this posting). Coppola waited until 1990 to offer his overwrought conclusion to the story, The Godfather: Part III.

THE GODFATHER, PART III. Co-written by Mario Puzo. Music by Nino Rota and Carmine Coppola. Co-written, produced and directed by Francis Ford Coppola. Running time: 160 minutes. Rated 14 years limited admission with the B.C. Classifier's warning: some violence and very coarse language. THERE'S A LESSON TO be learned here.
When a filmmaker says he doesn't want to make a movie, maybe he really doesn't want to make it.
For years, Francis Ford Coppola resisted Paramount Pictures' enthusiasm for a third Godfather feature. Truth to tell, he'd said all that needed to be said in his brilliant 1972 adaptation of Mario Puzo's potboiler.
A mob family saga, Coppola's original film introduced us to Second World War hero Michael Corleone (Al Pacino). The youngest son of New York Mafia don Vito Corleone (Marlon Brando), he understands the nature of his father's "business" but assures his gentrified girlfriend Kay Adams (Diane Keaton) "that's my family . . . it's not me."
By the end of the picture, he and his family are one, as he assumes his father's role as "godfather." A huge hit, the film generated a new cycle of gangster movies, and was accused of glorifying crime.
Although the story was a classic tragedy, there were those who saw Michael's succession as a form of success, and his consolidation of criminal power as proof that he was a "hero."
Coppola's response was The Godfather: Part II (1974), a more self-consciously artistic film.
A master moviemaker, Coppola recognized that the first film was the sort of action-powered epic that grabbed audiences by the throat and whispered "feel."
The second smoothed our lapels and snarled "think!" It did so by telling two stories, a ploy that forced an audience to weigh its response to each.
In the process, Coppola created a feature that was less a sequel than an expansion of the original film. He showed us monsters infected with Old World hatreds and habits, pursuing a diseased version of the American Dream. Though they try to isolate family from "business" and private morality from corporate self-interest, it can't be done.
The moral poison that's released to further the interests of the Corleone Family ultimately destroys the real family. The two films — each an Oscar winner for best picture — created a style upon which other filmmakers have since worked countless variations.
Which brings us to The Godfather: Part III, a large, lifeless lump in which Coppola says it all over again in headline-sized type.
Practically a parody of the familiar formula, this is the version in which:
● an anguished Michael (Pacino) returns to Sicily and confesses his sins to the saintly cardinal who will become Pope John Paul I (Raf Vallone);
● his sister Connie (Talia Shire) turns into Lucrezia Borgia;
● his daughter Mary (Sophia Coppola) falls in love with her cousin Vincent Mancini (Andy Garcia), the "illegitimate" son of Michael's late brother Sonny.
Like the previous pictures, Part III opens with the family gathered for a religious occasion and concludes with a major massacre of Corleone Family enemies. Ponderous and predictable throughout, it presents its tale of corruption and damnation with operatic overstatement.
Lest anyone miss the point, the grand finale is built around a performance of Mascagni's Cavalleria Rusticana, a tragedy of betrayal and revenge.
Coppola's best instincts told him to leave well enough alone. The Godfather: Part III shows how right he was.

Afterword: In the 16 years between The Godfather: Part II and Part III, Coppola directed eight features, a television show episode, a 3D theme-park short and a segment in an anthology film. An eclectic list, it began with what many of us believe to be the greatest war movie ever made, 1979’s Apocalypse Now. (The story of its making was later told in the 1991 documentary feature Hearts of Darkness.) Combining a real need to lighten up with his passion for innovation, he surprised audiences with an original screen musical, One From the Heart.
My own rave review notwithstanding, the 1982 feature was a major financial failure for its creator. His next two pictures — The Outsiders and Rumble Fish — made back-to-back in Tulsa, Oklahoma, were based on teen tales by YA (for Young Adult) novelist S.E. (for Susan Eloise) Hinton. When their boxoffice performance failed to impress studio bookkeepers, he returned to the gangster genre. Set in 1930’s New York, 1984’s The Cotton Club was a troubled project long before Coppola arrived on the set, and the resulting feature was one more money-loser for its producers.
In 1985, he collaborated with his friend George Lucas on Captain EO, a 3D science-fiction short starring pop star Michael Jackson. Created as a theme park attraction, it made its debut in Disneyland in 1986. Then came Peggy Sue Got Married, the 1986 fantasy romance in which its title character travels 25 years back in time to relive her senior year in high school. Not only was the picture a hit (earning its star, Kathleen Turner, a best actress Oscar nomination), but it made a nice balance with Coppola’s contribution to television’s Faerie Tale Theatre. He directed the 1987 episode Rip Van Winkle, based on Washington Irving's tale of a man who wakes up 20 years in his future.
The 1987 home-front drama Gardens of Stone gave the director another opportunity to muse upon the effects of the Vietnam war. After that, he just had fun with Tucker: The Man and His Dream (1988), the mostly true story of an entrepreneur who set out to change the American automobile industry. Coppola also found time to direct the “Life Without Zoë” episode in 1989’s New York Stories, an anthology feature that included contributions by Martin Scorsese and Woody Allen. To state the obvious, Coppola did not lack for work between Godfather parts.