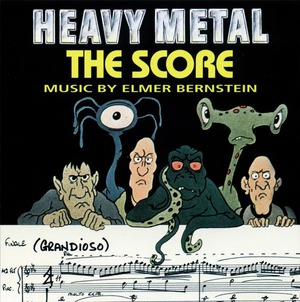 
Recognizing the importance of music to a movie's success, Ivan Reitman went with the best, in the process giving veteran composer Elmer Bernstein his first opportunity to score an animated feature.


HEAVY METAL — THE SCORE BY ELMER BERNSTEIN (1981; Full Moon/Asylum 5E-547 Stereo)
Tuesday, January 19, 1982
DIRECTORS? “In recent times,” says composer Elmer Bernstein, “the field has been invaded by some younger men whose egos far exceed their talent, and there is a tendency to treat the composer as some sort of mechanic who produces some sort of product by the yard.”
Bernstein, who celebrates his 65th birthday in April [1982], has little use for “genius” directors. An 11-time Oscar nominee, he doesn’t need to hire out as a mechanic, either.
With well over 100 film scores  — among them The Ten Commandments, The Magnificent Seven, The Great Escape and Thoroughly Modern Millie — to his credit, Bernstein can choose his assignments and his employers. He prefers working with “producers and directors (who) give more thought to the contribution of music.”
Fourteen years ago, Ivan Reitman was thinking about that very problem. A music major at Hamilton’s McMaster University, he participated in a special National Film Board program where he was able to study the relationship of music to the movies.
Today, at 34, Reitman is the Canadian film industry’s major success story. He is also one of the few “younger men” who appreciates “the contribution of music.”
Bernstein and Reitman first worked together on the Reitman-produced comedy National Lampoon’s Animal House (1978). The chemistry worked, and Bernstein has scored every Reitman project since, providing the music for Meatballs (1979), Stripes (1981) and portions of last year’s Heavy Metal.
On the last named picture, a Canadian-financed cartoon feature, producer Reitman demonstrated some genuine marketing genius. Since Heavy Metal involved the “talents” of some 13 rock music “stars,” a soundtrack album was tied in to the release of the film. A double-disc, four-sided package, it was available for people who like that sort of thing.
For those of us who don’t, there is a separate, single-disc album called Heavy Metal — The Score by Elmer Bernstein. As it turns out, Bernstein’s music was the single first-class element in the entire rush-job production.
His major contributions were to the Den and Taarna (misspelled “Tarna” on the album jacket) episodes. Designed as examples of heroic fantasy, both sequences contain images and ideas beyond the range of the rock idiom.
Throughout, the full, rich, distinctive Bernstein style is evident, despite his limited contribution to the picture. Consisting of 12 cuts, Heavy Metal — The Score features the composer conducting Britain’s Royal Philharmonic Orchestra.

AFTERWORD: To his credit, Ivan Reitman was an Elmer Bernstein fan in a position to offer the composer feature film assignments in the late 1970s, a time when his talent was being overlooked by many in Hollywood. Heavy Metal was their fourth feature collaboration. They worked together on three other pictures, including Spacehunter: Adventures in the Forbidden Zone (1983), Ghost Busters (1984) and Legal Eagles (1986),