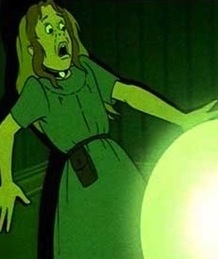 In the film's framing story, a glowing green globe corners a little girl and insists that she listen to its eight nasty tales.


Somewhere between the magazine and movie screen, producer Ivan Reitman decided to forgo the art and concentrate on the music, with the result that Heavy Metal seems more like a music video than a movie.


Wednesday, August 12, 1981
HEAVY METAL, how didst thou cheat me? Let me count the ways.
With thy title: For more than four years Heavy Metal, the self-styled “adult illustrated fantasy magazine,” has offered its readers genuine artistic alternatives. Its publisher, a subsidiary of National Lampoon, Inc., went to France to find something new and different.
Heavy Metal was a reaction to the superhero schlock being ground out by Stan “The Man” Lee via his Marvel Comics group. It borrowed its name and bought much of its art from a glossy Parisian publication called Metal Hurlant, a magazine that appeared “mensuel pour adultes!”
Heavy Metal, the magazine, wed the iconoclastic American “underground” comics and the more intellectual European “bandes dessinees.” There were no forbidden themes or ideas and the artist/writers were free to mix sex, violence, science fiction and political fantasy.
Heavy Metal, the magazine, really is something different, something that the writers responsible for Heavy Metal, the movie, utterly failed to grasp. Instead, they’ve just imposed the old Marvel Comics mentality on their material.
First, they invented a framing story — a little girl is cornered by a glowing green globe that insists on telling her several nasty, short tales — then force the film’s vignettes into their predetermined mold.
The loquacious globe is Loc-nar, and it introduces itself as the embodiment of all evil. Its appearance in each of the story sections not only provides a linking element, but it reduces the individual plotlines to simple good-bad conflicts. Considerable double standard nudity — girls, yes; boys, no — provides just enough superficial sexism to satisfy the arrested adolescents in the crowd.
With thy promise: Advertising for the film says “based on original art and stories by Richard Corben (Den, a.k.a. Neverwhere), Angus McKie (So Beautiful, So Dangerous), Dan O’Bannon, Thomas Warkentin (writer and artist of Soft Landing) and Bernie Wrightson (Captain Sternn).
That, of course, is like saying that a paint-by-numbers kit is “based on original art by Leonardo DaVinci.” Heavy Metal is as faithless to the magazine’s art as it is to its feeling.
In print, each of the artists named has a distinctive and individual style, a vision and a point of view that is brought out by his choice of medium. Corben, for example, is a master of the airbrush and a creator of heroically proportioned characters. Wrightson, by contrast, is a cartoonist who favours the more conventional pen and ink.
On screen, unfortunately, there is a “house style.” Because several animation companies participated in the making of the picture, producer Ivan Reitman hired a “production designer” to homogenize the film’s look.
Filmgoers genuinely interested in animation will be disappointed. Although Reitman and director Gerald (Tiki Tiki) Potterton genuflect to the memory of full animation, make respectful noises about Disney’s Fantasia and pay homage to the idea of art, their $7.3-million feature has more in common with a rush job such as Ralph Bakshi’s American Pop.
Mechanical techniques — a Xerographic process developed by Ub Iwerks for Disney’s 1961 release 101 Dalmatians, and Rotoscoping, patented by Max Fleisher in 1917 — saved the filmmakers time and money, but also severely limited the real artistic possibilities of the medium. Heavy Metal, the movie, is strictly a take-the-money-and-run operation.
With thy pitch: I admit my bias. I have a long-standing interest in animation, illustration, the graphic arts and contemporary comics that coloured my initial reaction to the picture. I planned to see the movie a second time in fairness to the many people who worked on the project. Perhaps I missed something of merit in the movie because I was too aware of what the pictures could — and should — have looked like.
Then the Columbia Pictures Heavy Metal information kit arrived and the horrible truth was out. Heavy Metal is not a movie at all
It’s an album cover. All of those Canadian tax-shelter investors bet their bucks, not on a picture, but on a soundtrack.
Although the Heavy Metal investment prospectus provided background biographies on six of “the companies and individuals who have been appointed sequence directors,” Columbia’s official credits sheet ignores the lot of them. I turned to the 15-page “production information” package only to discover that the picture’s visual component has been given remarkably short shrift.
It contains no material on the original artists (Corben, Wrightson, et al), names none of the animators or their companies, offers no discussion of the film’s several storylines and utterly ignores the 15 actors (among them Canadians John Candy, Don Francks and John Vernon) whose voices are heard in the picture.
Instead we are given biographical notes on producer Reitman (omitting, of course, his 1970 Toronto conviction for “making and showing an obscene film”), director Potterton (misspelling the names of two of his films) an executive producer, an associate producer and screenwriters Dan Goldberg and Len Blum.
Then there are seven —count ’em — seven pages chronicling the triumphs of the 13 rock “stars” whose original “works” are heard in the film and who are heard on the soundtrack album, now available at your local supermarket.
I’m not rushing out to buy it.
We are told that 13 groups are performing 17 original songs. It could have been 13 groups performing one song, or maybe one group working over 17 songs for all the difference it makes. All of that stuff sounds the same.
Besides, Heavy Metal was supposed to be a movie, not an oh-wow-far-out session for the terminally stoned. As a moviegoer, I felt cheated.

AFTERWORD: To be fair, the film's original financial prospectus did tell us that "a substantial portion of the budget" would be earmarked for the rock soundtrack. Reitman had done his math and was well aware that music fans significantly outnumbered comic fans in the marketplace circa 1980. As a producer, his responsibility was to his investors, not to the tiny cohort of critics for whom the names Corben and Wrightson actual meant something. A decade later, another Canadian production team — Montreal-based CineGroupe Animation, founded in 1974 by Jacques Pettigrew and Michel Lemire — released Heavy Metal 2000. There was no Reitman involvement in the second film.