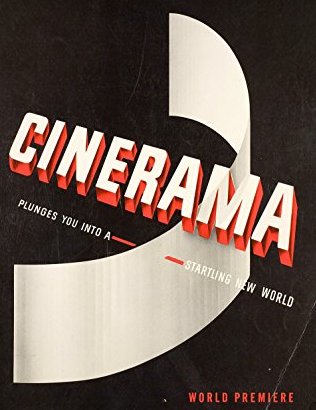 A program book was part of the audience experience during the Word Premiere engagement of director Merian C. Cooper’s 1952 feature This Is Cinerama.

Audience taken on a trip


Putting the “big” in big-screen movies


It’s rare for a movie premiere to make the front page of The New York Times, but it happened following the opening of “the new motion-picture system known as Cinerama.” It took place on this day (September 30) in 1952, “before an invited audience at the Broadway Theatre.” According to Times film critic Bosley Crowther “it was evident that the distinguished gathering was as excited and thrilled by the spectacle presented as if it were seeing motion pictures for the first time . . . The process, invented by Fred Waller, has been under development for several years.” For the then-62-year-old Abel Gance, the story might have prompted a moment of déjà vu to April 7, 1927, and the reaction of a distinguished gathering to the premiere of his silent epic Napoléon. Screened at Paris’s Palais Garnier, it introduced the world to Cinerama’s inspiration, a triple-screen projection process called Polyvision. Distributors, soon to be faced with the addition of sound to the movies, resisted the problems of adding more screens, and Gance’s innovation did not catch on. Although a cut version of Napoléon was shown in the U.S., Polyvision never made it across the Atlantic until 1973 (a fascinating story I’ll post to Reeling Back sometime soon). Today, the focus is on the the movie that film pioneer Merian C. Cooper made to re-introduce the wide-screen experience, 1952’s This Is Cinerama.

THIS IS CINERAMA. No writer(s) credited. Music by Sidney Cutner, Howard Jackson, Paul Sawtell, Leo Shuken, Max Steiner and Roy Webb. Directed by Merian C. Cooper, Gunther von Fritsch, Ernest B. Schoedsack and Michael Todd Jr. Running time: 115 minutes. General entertainment with no B.C. Classifier’s warning. SOME PEOPLE ARE PERFECTIONISTS. For them, anything worth doing is worth doing right.
Some people are not. Recently a group of this second kind got together at the MGM studios and decided to recycle some old film.
They decided to clean out the vault labelled "Cinerama."
It was 20 years ago last September [1972] that the world had its first look at the process called Cinerama. It was an impressive and memorable premiere. As the first nighters crowded into the auditorium of New York's Broadway Theatre, they were greeted by the biggest movie screen that most of them had  ever seen.
Fifty-one feet wide by 21 feet high, it was curved to form an arc of 146 degrees. To fix an image on this triple-width monster, the Broadway had installed two extra projection booths, each containing two new projectors. When the lights went down, though, only the centre booth came alive, beaming a small, square black and white picture of broadcaster Lowell Thomas to the centre of the screen.
In stentorian tones, Thomas lectured his audience on the mechanics of motion pictures, illustrating his talk with photos and film clips, including Edison's The Kiss (1896), a bit of 1903’s The Great Train Robbery, and a few moments from The Sheik (1921). He explained how the new process was destined to revolutionize the movies and concluded with the ringing declaration, "This is Cinerama."
Immediately the entire screen surface exploded into brilliant colour. In a moment, it was obvious that the camera was peering over the front panel of the first car of a roller coaster. So immense was the picture and so drastically curved was the screen that the entire field of the spectators' vision was filled.
Adding to the effect was a six-track stereophonic sound system suddenly filling the theatre with the noise of Rockaways Playland amusement park. As the coaster car moved off, carrying the entire audience with it, there were gasps and screams throughout the auditorium.
It was, to use a somewhat more recent word, a trip. The senses were fooled into full participation and hardly anyone noticed when the three separate images contributing to the one big one occasionally fell ever so slightly out of synchronization.
Nine more sequences followed, in which the filmgoer was "put into the picture." First, Thomas demonstrated how much spectacle could fit on the giant screen with an opulent bit of classical dance on a theatre stage.
Then he pointed out how the sound system worked by having a choir march into the picture voices first, from behind the camera. The effect was of having had them walk up the aisles through the auditorium.
Travelogue time followed. Michael Todd Jr., who would later develop his own Todd-AO process (and marry Elizabeth Taylor), provided this first Cinerama adventure with five stops:
●    Venice for a waterborne parade;
●    Edinburgh, for a pipe band tattoo;
●    Vienna, for a Boys Choir concert;
●    Milan, for an excerpt from a La Scala production of Aida;
●    Madrid, for a bullfight.
Returning to the U.S., the camera focused on the water skiing entertainers at Florida's Cypress Gardens. Then, mounted in the bomb bay of a converted Second World War bomber, it takes off to offer an aerial view of the nation.
That's how it was.
That's not how it is.
For the 1973 reissue, Metro has reprinted the three original negatives side by side on a single reel of 70mm film. The image is projected on a standard flat screen.
No curve. No depth.
No Cinerama.
It's not even the whole film. Approximately one third of each of the side panels is nipped off before it reaches the screen. And what remains has, unfortunately, deteriorated.
Once bright,  eyefilling  colours have darkened in storage to the point where soft shadows are now inky black pools, and once-delicate flesh tones are ruddy blotches.
The panel seams, now locked permanently on the single film strip, repeat without variation the once-random mismatchings, producing such marvels as the three-legged tourist in St. Mark's Square, the double-nosed man in the La Scala audience, and the triple-eyed dancer on its stage.
Dating, too, shows in the technique. The once breathtaking aerial sequences now seem long and tedious. It has been done so often since and so much better. Without the depth effect, virtually every sequence seems over-long, and without much real interest.
The audience has lots of time to consider what a poorly edited, poorly paced film this has become.
To have anything like the old effect, the old film needs the big old screen. It also could have stood the kind of  colour clean-up that Metro gave to its most precious property, Gone With the Wind, a few years back [1968]. That would have been doing it right.
They didn't, with the result that This is Cinerama isn't.
In all, it probably would have been much kinder to all concerned if they had just left the old pioneer to moulder away in its can.

Afterword: In the years following the Second World War, the U.S. film industry considered the rise of television as a direct threat. Cinerama was one of the picture business’s first attempts to give audiences something bigger and better. Its historic moment lasted about 20 years, divided into two distinct periods. During the first decade, or the “true Cinerama” era, films were made using three interlocked 35mm cameras, the three-strip process that produced pictures for theatres equipped with three projection booths. This Is Cinerama was followed by eight more features. All were travelogue-style documentaries, with the exception of one musical, The Wonderful World of the Brothers Grimm, and the episodic Western, How the West Was Won (both 1962). While Cinerama remained an expensive specialty item, Hollywood’s studio filmmakers began enhancing their screen offerings with such new processes as 3D (1952), CinemaScope (1953) and VistaVision (1954), as well as stereophonic sound.
In 1963, Cinerama took advantage of the fact that widescreen presentation had become the industry standard, and switched over to making single camera/single projector movies using 70mm film. The pictures, such as 1963’s It’s a Mad, Mad, Mad, Mad World and The Greatest Story Ever Told (1965), were almost as spectacular, and were able to be seen in far more theatres. The downside for the Cinerama brand was that its 70mm movies were no more spectacular than anybody else’s. One of the last movies to be successfully presented as a Cinerama picture was director Stanley Kubrick’s sci-fi feature, 1968’s 2001: A Space Odyssey, the very definition of a celluloid trip.
Today, according to Internet sources, there are but three theatres left on earth equipped to show a three-strip Cinerama movie. One is the the Cinerama Dome in Los Angeles, another is the Pictureville Cinema in Bradford, U.K., and the third is just down the road from Vancouver, the Seattle Cinerama. The latter, built in 1963, was saved from demolition in 1999 by Microsoft co-founder and billionaire sci-fi fan Paul Allen, who underwrote a major renovation. The current attraction (September 30, 2017) on its big screen is Blade Runner - The Final Cut 4K Restoration.

See also: For the story of a multi-screen process inspired by Cinerama, see my story on Circle-Vision 360, Walt Disney’s contribution to specialty film making.