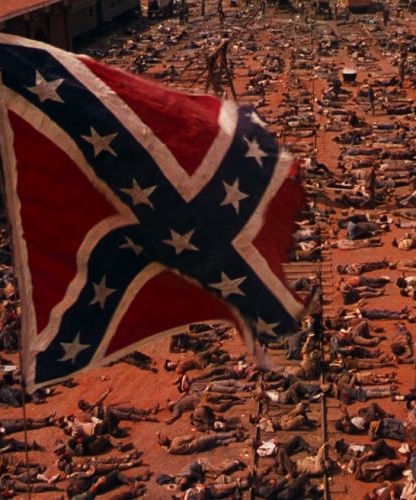 Among the most memorable shots in film history is the scene at the Atlanta train station in which the camera pulls back from a devastated Scarlett O'Hara's face to reveal the human wreckage of the U.S. Civil War. It's in director Victor Fleming's Gone With the Wind.


Though New York native Donald John Trump may consider himself a Yankee Doodle Dandy, he was not "born on the fourth of July." The presumptive presidential nominee of the Republican Party, he celebrates his 70th birthday today (June 14), which just happens to be Flag Day in the U.S. The non-statutory holiday commemorates a 1777 resolution by the Second Continental Congress directing that "the flag of the thirteen United States be thirteen stripes, alternate red and white; that the union be thirteen stars, white in a blue field, representing a new constellation." In 1818, Congress adopted a plan to add a star each time a new state entered the union, but to keep the stripe count at 13 to honour the original 13 colonies that declared their independence from Great Britain in 1776. Four years earlier, when Baltimore lawyer Francis Scott Key's poem Defence of Fort M'Henry (sic) was set to music, Americans began singing about their Star-Spangled Banner. About a century later, in 1916, President Woodrow Wilson issued the proclamation to put Flag Day on the calendar. (Anticipating the new observance, pop song composer George M. Cohan put You're a Grand Old Flag into the national repertoire in 1906.) With U.S. voters going to the polls 21 weeks from today, some have noticed that Stars and Bars are featured on the flag most prominently displayed in the movie that candidate Trump says is one of his favourites, director Victor Fleming's 1939 classic, Gone With the Wind.

Saturday, February 24, 1968.
GONE WITH THE WIND. Written by Sidney Howard. Based on the 1936 novel by Margaret Mitchell. Music by Victor Young. Directed by Victor Fleming. Running time: 238 minutes. General entertainment.
LIKE SOME FRENCH CANADIANS, American Southerners are a people who reckon time from a conquest. What they still call the "War Between the States" historically ended in 1865, with the Confederate General Lee surrendering to the Union's Grant at Appomattox Court House.
At that moment the real "Old South" died and the Southern Myth was born. "There was a land of cavaliers and cottonfields in the Old South . . . "
Rolling heavenward in bold block letters, these words introduce the cinema's most lavish lamentation for that myth. For just short of four hours, its high-powered Hollywood cast mourn for a way of life Gone With the Wind.
The blockbuster movie of 1939, Wind is hailed as one of the greatest motion pictures ever made. It occupies the top spot on Variety's list of all-time top-grossing films [or did from 1939 to 1972] and, in its own year, was showered with honours, acclaim and 10 Academy Awards.
Over the years audiences have consistently crowded into theatres featuring director Victor Fleming's adaptation of Margaret Mitchell's massive melodrama. As a result, MGM decided to reprocess the entire film for a [1968] wide screen, stereophonic-sound rerelease.
The expensive enlargement does not change the basic film, though. Wind remains what it always was — a film designed for a square screen and a square audience that fully enjoyed stereotypical characters.
Reduced to essentials, Wind is the biggest soap opera ever made. Director Fleming knew this right from the start, announcing on his first day of shooting that "I'm going to make this picture a melodrama."
Filmgoers viewing Wind through the eyes of the 1960s might wonder at the picture's serious reputation. For us, it is a stunning demonstration of just how far films and filmmaking have come in the almost 30 years since the film's release.
Pre-war audiences loved it, perhaps even more than they loved Margaret Mitchell's sprawling, best-selling 1936 novel. There was something fascinating about Scarlett O'Hara (Vivien Leigh, a British actress who went to the film's Atlanta, Georgia premiere thinking that Dixie was "the song from the picture"). She is the beautiful self-centred heiress to Tara, an Eden-like cotton plantation.
She also is the most sought-after belle in the South (and a character whom novelist Mitchell bluntly labelled "a hussy"). Tragically, the fiery Scarlett has eyes only for dreamy, idealistic Ashley Wilkes (another Britisher, Leslie Howard), master of the neighbouring plantation, Twelve Oaks.
Her romantic plans are thwarted when Ashley announces his engagement to his saintly, self-sacrificing cousin, the too-good-to-be-true Melanie Hamilton (Olivia de Havilland).
Two factors emerge to further complicate Scarlett's otherwise idyllic life. One is dashing blockade runner Rhett Butler (Clark Gable), a Confederate James Bond who decides that he must have her for his own. The other is the U.S. Civil War.
Screenwriter Sidney Howard's adaptation of Mitchell's 1936 novel makes no secret of its bias. To a man, the Southerners are gallant, chivalrous and heroic defenders of their embattled way of life. Northerners, on the other hand, are never ever referred to as anything other than "yankees," "scallywags" or "carpetbaggers."
If it had been dished up as an afternoon radio serial, they might have called it Our Gal Scarlett. Instead, it became this blockbuster movie, one that turned the wilful heiress into a living symbol of the Southern Myth.
After seeing it for the first time, I have to wonder why people talked of this film with such enthusiasm. Why do they pay reserved seat prices to view it again and again?
Why has this trite tale survived as a Great Movie?
Nostalgia and curiosity are its major drawing cards. Wind's audiences are filled with older women who remember Clark Gable as a matinee heartthrob, and younger couples who want to see for themselves what the fuss was all about.
And there is some greatness in its period cinema beauty. There is considerable skill in what it offers to our eyes and ears.
Wind's camera work is a study in graceful composition carefully blended with muted colours. Its score, dominated by the haunting Tara's Theme, is presented as an important, integral part of the plot. Its actors were all cast with deliberate attention to their strengths, and really did play their limited (and limiting) roles to near perfection.
Movie historians tell us that Wind was, in its own day, the motion picture medium's crowning achievement. Its box-office success resulted from the fact that it delivered epic production values in what was a new, improved Technicolor process.
The package delivered a solid evening's entertainment.
Today, the film is a precious antique, one still powerful enough to leave an audience dewy-eyed. Call it a relic of a filmmaking style that made its mark, and is now Gone With the Wind.

Afterword: In a 2012 interview with the Movieline website editorial director Frank DiGiacomo, Donald Trump offered a list of his five favourite movies. It began with director Orson Welles's 1941 classic Citizen Kane. Also included was 1939's Gone With the Wind (reviewed above), described by Trump as "a love story combined with a time in our country's history that was pivotal in our evolution." His remaining picks were Francis Ford Coppola's The Godfather (1972), Martin Scorsese's GoodFellas (1990) and Sergio Leone's The Good, the Bad and the Ugly (1966).
Viewing Gone With the Wind from the perspective of the late 1960s, it was hard not to be condescending. The year that MGM released its reprocessed epic (1968), film audiences were being challenged by such explosive new experiences as director Stanley Kubrick's 2001: A Space Odyssey, Roger Vadim's Barbarella, Lyndsay Anderson's If . . ., George Romero's Night of the Living Dead, Mel Brooks's The Producers, Roman Polanski's Rosemary's Baby and George Dunning's Yellow Submarine. A new movie generation was coming of age, and dismissive words like "antique" and "relic" came to mind when the old photoplay reappeared on the scene.
Other critics were much less generous. For people engaged in the civil rights struggle of the day — the 1968 best picture Oscar went to director Norman Jewison's uncompromising tale of the New South, In the Heat of the Night — GWTW was a racist affront, a movie that romanticized the Confederate slave state and perpetuated black stereotypes. Feminist critics zeroed in on the picture's benign attitude towards marital rape, pointing out that in the famous "dark at the top of the stairs" scene a drunken Rhett refuses to take Scarlett's vehement no for an answer. Its contemporary honours notwithstanding, the picture was (and remains) well past its best-before date as honest entertainment. Along with D.W. Griffith's The Birth of a Nation (1916) and Leni Riefenstahl's Triumph of the Will (1935), it belongs on the shelf of cinematic landmarks labelled "toxic content — handle with care."