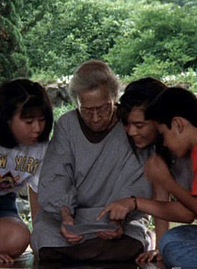 
On this day (August 9) in 1945, an estimated 6,000 Catholic parishioners gathered for morning mass in St. Mary’s Urakami Cathedral in Nagasaki, Japan. Their community, descended from those converted to Christianity by the Jesuit missionary Francis Xavier in 1549, was heir to a remarkable history of faith and perseverance. In the early 1600s, their religion was outlawed by the Shogun, its practice made punishable by death. For some 250 years, they lived an underground existence, enduring persecutions similar to the Christians in Imperial Rome. Their secret was revealed following Japan's 1871 proclamation of religious tolerance. In celebration, they built a cathedral that was, in 1945, the largest Christian church in the Far East. Also on this day, the crew of a B-29 Superfortress, called Bockscar, were diverted from their primary target, the cloud-shrouded city of Kokura. Because they were able to make the required visual sighting of Nagasaki's most prominent landmark, they released the plutonium bomb, called Fat Man, directly over St. Mary’s Urakami. In a flash, the congregation — together with an estimated 70,000 others — was no more. "What the Japanese Imperial government could not do in over 200 years of persecution," Dr. Gary Kohis wrote recently on the Global Research website, "American Christians did in nine seconds." A very different memory of this sad day is contained in Akira Kurosawa's autumnal masterpiece Rhapsody in August (1991).

Friday, June 12, 1992.
RHAPSODY IN AUGUST. Based on Kiyoko Murata's novel Nabe-no-naka [Inside the Pot]. Music by Shinichiro Ikebe. Written and directed by Akira Kurosawa. Running time: 98 minutes. Rated General. In Japanese with English subtitles. THE OLD WOMAN touches hearts.
"It was kind of a funny summer," teenaged Tami (Tomoko Ohtakara) tells us at the beginning of director Akira Kurosawa's magical, incandescent Rhapsody in August. "Strange things happened during summer vacation."
Together with her sister and two cousins, she is a city kid spending time in the country at grandmother's house.
Grandma Kane (Sachiko Murase), a teacher widowed during the war, lives in a traditional Japanese farmhouse outside of Nagasaki. A wonderful old woman, she tells tales that enchant, excite and sometimes terrify her energetic young guests.
The old man touched a nerve.
Honoured as the greatest living filmmaker, the director of 1950's  Rashomon, Ran (1985) and The Seven Samurai (1954) has made a movie about "the feelings of children."
Personally moved by Kiyoko Murata's 1987 novel Nabe-no-naka (Inside the Pot), Kurosawa saw it as a small, personal film about family, forgiveness and domestic reconciliation.
Among Granny's memories is the August 9, 1945, atomic attack on Nagasaki. Among the truths voiced in the film — "Americans resent being reminded about the bomb."
Do they ever!
Since the picture's premiere at the 1991 Cannes Film Festival, U.S. commentators have been in a self-righteous snit. Kurosawa has been vilified for his eloquent, allusive, almost painfully polite illumination of some simple truths.
An impolite Canadian, I've noticed that a Hollywood Establishment that tirelessly reminds us about the Nazi Holocaust (and so it should), isn't interested in the atomic bombings of Japan. They would think me rude were I to suggest that Fat Man's visit to Nagasaki, the second city to be incinerated as an example of righteous American power, was in fact an act of nuclear terrorism.
Kurosawa is never rude. American sensitivities notwithstanding, what he offers is reality through the eyes of children, fresh-faced youngsters for whom "the bomb happened once upon a time . . . "
Today's question is, "can we all get along?"
Kurosawa's answer comes in the form of Clark Haruna (Richard Gere), the Hawaiian-born son of Granny's older brother. With the family in turmoil over the grandchildren's questions about Kane's stories, it is the thoughtful Japanese-American who arrives to effect a generational reconciliation.
An autumnal masterpiece from Japan's greatest filmmaker, Rhapsody in August is a charming, positive feature for and about today's kids.

Afterword: One indication of Akira Kurosawa's lasting influence is the fact that over the years many major filmmakers have sincerely flattered him by imitating his pictures. American director John Sturges was among the first, remaking Seven Samurai as a Western called The Magnificent Seven (1960). In 1964, Italy's Sergio Leone made his first "spaghetti Western" Per un pugno di dollar (A Fistful of Dollars), a remake of Yojimbo, while another American, Martin Ritt, remade Rashomon  as The Outrage. In 1980, Roger Corman's Battle Beyond the Stars put a comic sci-fi spin on Seven Samurai. Walter Hill paid his respects to Kurosawa in 1996 with Last Man Standing, another retelling of  Yojimbo, set during the U.S. prohibition era. And, while his film is not an actual remake, Star Wars (1977) director George Lucas acknowledges Kurosawa's The Hidden Fortress as a major influence on him and his picture.