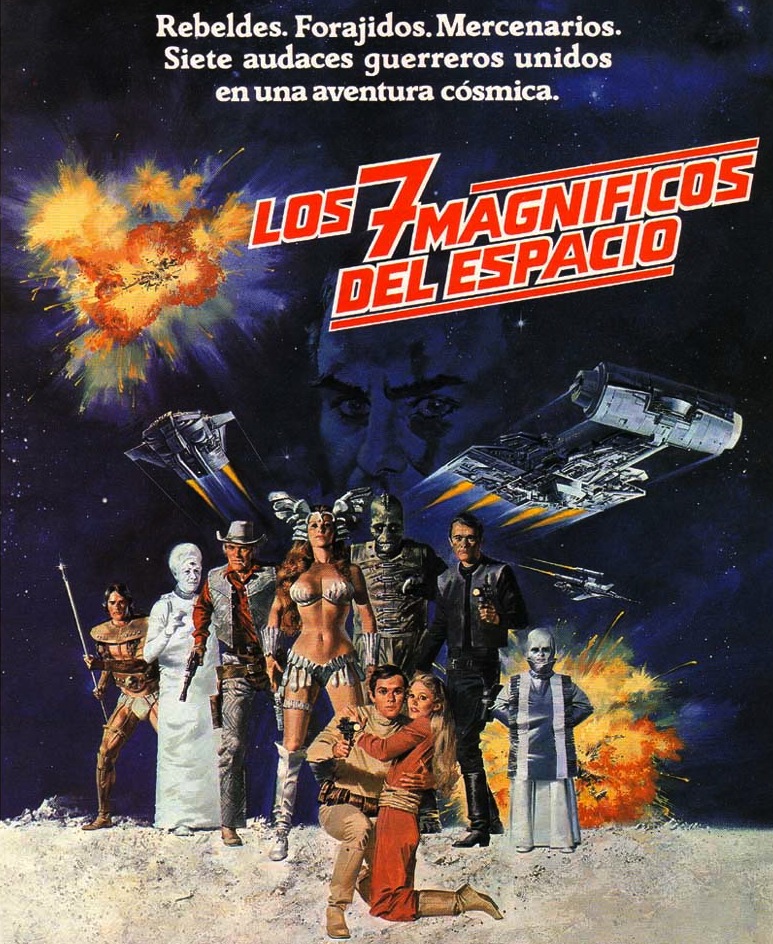 The Spanish-language poster leaves no doubt as to the inspiration for producer Roger Corman's 1980 sci-fi feature Battle Beyond the Stars.


We can't help but be interested in Guardians of the Galaxy, because its writer-director, James Gunn, made his first feature film, Slither (2006), right here in Vancouver. A TV trailer for the new release, opening today (August 1), includes the line "the best Marvel movie yet." That particular pull-quote is attributed to Alisha Grauso, the bespectacled editor-in-chief of moviepilot.com. (Though not a verbatim quote, it does paraphrase the overall tone of Ms Grauso's July 24 review on the website created to "help studios trigger, fuel and amplify positive conversations about their movies.") Gunn drew his inspiration from the comic-book publisher's 2006 update of an original 1969 superhero team. Based on the source material (and a viewing of the available trailers), Reeling Back fears that the result will be another $170-million cheesefest. Which is not to say that the cinematic dairy case does not contain a host of guilty pleasures. In 1980, an era when low-budget, entertainingly cheesy movies were based on classic films rather than comics, legendary pinch-penny producer Roger Corman parted with an estimated $2 million to parody Star Wars with a deep-space remake of The Seven Samurai. He called his picture Battle Beyond the Stars.

Wednesday, October 22, 1980.
BATTLE BEYOND THE STARS. Written by John Sayles. Music by James Horner. Directed by Jimmy T. Murakami. Running time: 104 minutes.  Mature entertainment with the B.C. Classifier's warning: some suggestive dialogue. AKIR WAS SUPPOSED TO have been a pushover. A planet with no weapons and a philosophy of non-aggression, it should have been an easy conquest for intergalactic bad guy and all-round bully Sador (John Saxon).
Something had gone wrong. Instead of heeding Sador's warning, the people of Akir hired mercenaries. The Akira were putting up a fight.
Akira? Isn't there a Japanese movie-maker named Akira Kurosawa?
Yes.
Didn't he make 1954's Shichinin No Samurai (The Seven Samurai), the story of a defenceless village that hires freelance warriors to protect it from marauding bandits in 16th century Japan?
Yes.
And wasn't American director John Sturges responsible for remaking Kurosawa's film as a Western called The Magnificent Seven in 1960?
Yes. And now Roger Corman, the producer who distributed Kurosawa's Oscar-winning Dersu Uzala (1975) in North America, is offering science fiction fans Battle Beyond the Stars, a tongue-in-cheek remake of the durable old samurai saga.
Threatened by Sador, the Akirans take the advice of blind Zed the Corsair (Jeff Corey): "To fight creatures of violence, find creatures of violence."
Zed entrusts Nell (the voice of Lynne Carlin), his sarcastic old spaceship, to an eager lad named Shad (Richard Thomas). Together, the ship and boy set out to find some good guy violent creatures.
In adapting Kurosawa's story to an outer space setting, Corman's creative team appears to have been influenced in equal measure by France's bandes dessinees and Buck Henry's short-lived TV series Quark (1977).
The design team, under art directors Jim Cameron and Charles Breen, have created a galaxy right out of Metal Hurlant, that spacey French-language comic art magazine. Touches of Jean-Claude (Barbarella) Forest and Philippe (Lone Sloane) Druillet are evident in the film's sets and hardware, most obviously in Nell, a spaceship best described as "buxom."
The storyline, credited to John Sayles and Anne Dyer, is full of the off-hand satire that characterized Henry's tales of space junk-man Adam Quark. Shad returns to Akir with the likes of Cowboy (George Peppard), a boozy intergalactic gunrunner with a taste for old Western movies; Cayman (Morgan Woodward), a reptilian protein hustler with a personal grudge against Sador; and Gelt (Robert Vaughn, one of Sturges's Seven), a professional killer with a price on his head.
Throwing the count off is Nestor (Earl Boen as No. 1; John Gowans as No. 2), a consciousness in control of five identical bodies.
Adding a touch of sex appeal are Nanelia (Darlanne Fluegel), a comely computer technician raised by androids, and St. Exmin (Sybil Danning), an underdressed, adventure-seeking daughter of the Valkyrie, a warrior race dedicated to the code "live fast, fight well and have a beautiful ending."
Both young women are attracted to the relentlessly sincere Shad. But first, Akir must be saved from Sador and his "army full of genetic mistakes."
No, it doesn't quite come off. For the most part director Jimmy Murakami is caught between running time and space technology.
During the film's 104 minutes, Murakami must accomplish five things: Set up the situation, introduce his corps of mercenaries, develop their relationship with the people who hire them, and show us the climactic battle.
Then there's the matter of special effects.
Kurosawa's film, a Japanese period piece, ran a brisk 160 minutes. Sturges compressed his story to 126 minutes. Neither of them had to devote a block of screen time to space hardware.
In the age of Star Wars, special effects are considered to be a major selling point. As a result, Murakami must sacrifice character-building scenes in favour of cataclysmic battles.
Technically competent and cheerful in tone, Battle Beyond the Stars is  essentially a slick sci-fi send-up.
Well, what did you expect from the people who gave us Piranha (1978) and Humanoids from the Deep (1980)?

Afterword: Roger Corman's lasting legacy rests less on the films he made than on the people he hired to make them. Among the graduates of the informal "Corman film school" are directors Francis Ford Coppola, Ron Howard, Martin Scorsese, Joe Dante and Ron Howard. For Jimmy T. Murakami (uncredited for co-directing 1980's Humanoids from the Deep), Battle Beyond the Stars remains his single live-action feature credit. Murakami went on to a career in animation, and is best known for his direction of When the Wind Blows (1986), an adaptation of the Raymond Briggs graphic novel. Other members of the Battle Beyond the Stars production team are better remembered. Its screenwriter, John Sayles, who had already written 1979's The Lady in Red, went on to become an independent film-making legend, as the writer-director of such films as Matewan (1987), Eight Men Out (1988), Lone Star (1996) and Men With Guns (1997). Its composer, James Horner, moved on to A-list assignments, winning a pair of Oscars in 1998 for his work on Titanic. Its art director, credited as Jim Cameron, made his own directorial breakthrough with 1984's The Terminator. As James Cameron, he would use the talents of composer Horner on such subsequent projects as Aliens (1986), Titanic (1998) and Avatar (2009).