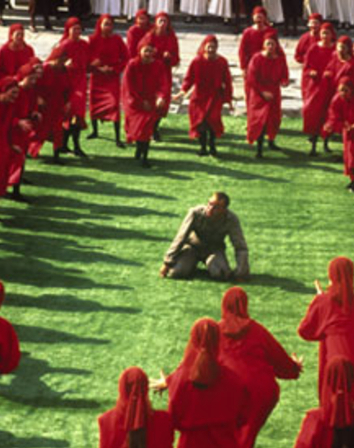 In a ceremony called “particicution,” Gilead’s handmaidens punish an enemy of the regime (Randell Haynes) for his alleged crimes against women in director Volker Schlöndorff’s 1990 adaptation of The Handmaid’s Tale.


On this day (February 19) in 2007, Canada decided to do the Time Warp again. Six years after shutting down due to federal budget cuts, ParticipACTION was back in business. Originally founded in 1971 as a non-profit private company promoting physical fitness, the initiative became a government agency in 1972. For 30 years, it fought what it called “the inactivity crisis,” mounting a series of advertising campaigns designed to inspire, goad, chivvy or shame citizens into more active lifestyles. In 1973, its TV spots told us that “the average 30-year-old Canadian is in about the same physical shape as the average 60-year-old Swede,” (a claim debunked in a 1990 Globe and Mail report). Brought back to life in 2007, it sharpened its focus to “kids 12 and under, as well as at-risk groups like seniors, aboriginals and the disabled.” In a 2011 brief to Parliament, ParticipACTION described itself as “a Canadian icon” that “uses mass media to raise awareness and change social norms on physical activity.” Critics of the agency note that it is little more than a funding mechanism for niche market advertising that has made little or no difference to bettering public health. Perhaps that’s why author Margaret Atwood decided to play upon the name in creating the “particicution” ceremony, a shaming ritual acted out in director Volker Schlöndorff’s 1990 adaptation of her novel, The Handmaid’s Tale.

THE HANDMAID’S TALE. Written by Harold Pinter. Based on the 1985 novel by Margaret Atwood. Music by Ryuichi Sakamoto. Directed by Volker Schlöndorff. Running time: 108 minutes. Restricted entertainment with the B.C. Classifier’s warning: some nudity, suggestive scenes, occasional violence. THE REPUBLIC OF GILEAD is a feminist's nightmare. A near-future theocracy, it is a modern state that pledges allegiance to the old-time religion.
"The Bible, the Old Testament (is) our sole and only constitution," says Commander Fred (Robert Duvall), a member of the ruling elite. The commander is particularly fond of Genesis 30.
A nation at war, Gilead appears to consist of the central eastern United States. As it fights its external enemies, it must also wage an internal struggle against the "plague of barrenness and infertility" caused by a combination of radiation, pollution and STDs.
That's where Genesis 30 comes in. "When Rachel saw that she bore Jacob no children, she envied her sister . . . " it reads.
"Then she said, 'Here is my handmaid Bilhah; go in unto her, that she may bear upon my knees, and even I may have children through her.'"
The Republic of Gilead began to take shape in novelist Margaret Atwood's mind "way back in 1981," she tells us in the press notes for The Handmaid's Tale. Ronald Reagan had just succeeded to the U.S. presidency, and right-wing fundamentalist Christian leaders were claiming credit for his election victory.
Published in 1985, Atwood's book tells the story of a woman imprisoned for attempting to escape from Gilead. Because she is fertile, she is forced into the service of her country as a "handmaid," becoming breeding stock for community leaders such as the commander.
In 1987, producer Daniel Wilson put together the financing for a film version. At the time, televangelist Pat Robertson was considered a serious contender for the Republican presidential nomination.
At the same time, the names Jim and Tammy Bakker were rapidly becoming household words. Reports of the couple’s scandal-plagued broadcast ministry seemed to embody all the worst sins of religious extremism.
Today [1990], events have rendered the spectre of Gilead somewhat dated. Director Volker (The Tin Drum) Schlöndorff's leaden screen translation no longer has immediate relevance. As a film, it is too rooted in its specific time and place to generate any of the timeless terrors of true nightmare fantasy.
Screenwriter Harold Pinter's adaptation plays like a rewrite of Orwell's 1984, with oppressive religion substituting for totalitarian communism, and Kate (Natasha Richardson) standing in for minor party member Winston Smith.
Like Smith, Kate manages to make contact with what appears to be a resistance movement. As in Smith’s Oceania, it is difficult to distinguish  friend from foe, ally from betrayer.
The result is another standard-issue cinematic dystopia, a picture in a direct line of descent from 1976’s Fahrenheit 451 and Z.P.G. (1972). Pretentious rather than effective, its art direction is more interesting than its plot.
The cast members, including Faye Dunaway as the commander's brittle, barren wife, Elizabeth McGovern as a defiant, gender-treacherous handmaid and Aidan Quinn as the commander's loyal aide, are all adequate to their formulaic tasks.
A German director of proven ability and sensitivity to women’s issues, Schlöndorff gives scriptural weight to his unsubtle tale. With the exception of a cheeky reference to the absence of hand lotion — no balm in Gilead — his film is as humourless as it is heavy.

Afterword: As multi-national productions go, The Handmaid’s Tale was particularly impressive. Its German director, Volker Schlöndorff, had a best foreign film Oscar win (for 1979’s The Tin Drum) to his credit. Its English screenwriter, Harold Pinter, recognized at the time as a major dramatist, went on to collect the 2005 Nobel Prize for Literature. Even its soundtrack, by Japanese Oscar-winner Ryuichi Sakamoto (for 1986’s The Last Emperor), was A-list material. Add a solid international cast, and the result should have been a great picture. The reality was a box-off bomb for U.S. independent distributor Cinecom, a company that filed for bankruptcy in 1991.
Like ParticipACTION, Atwood’s story is getting a second chance. Among the ads seen during the February 5 Super Bowl game was a 30-second spot for a new adaptation of The Handmaid’s Tale. Scheduled to begin airing April 26, the 10-episode television series was shot in Toronto for the U.S. video-on-demand service Hulu. This time, the script is by Atwood herself, a screenplay credit she shares with veteran TV writer Bruce Miller.

See also: Margaret Atwood’s first novel adapted to the big screen was Surfacing. Directed by Québec cinema legend Claude Jutra, it starred Kathleen Beller as Kate, a young woman who ventures into the north woods in search of her missing father.