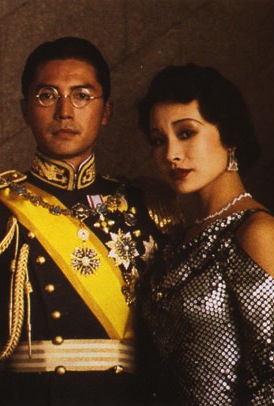 Together with his consort Wan Jung (Joan Chen), Pu Yi (John Lone) ruled as the Emperor of Manchukuo, one chapter in director Bernardo Bertolucci's 1987 epic, The Last Emperor.


In a rare coincidence of dates — it won't happen again until 2067 — today (February 8) is both the Chinese New Year and British Columbia's Family Day. A statutory holiday in the West Coast province since 2013, the Family Day "tradition" was manufactured by politicians to add an official holiday to a month that previously had none. Rather more firmly established is China's Spring Festival observance, marked in various ways for more than 3,000 years. Based on the 1644 Shíxiàn calendar, it uses a lunisolar form of calculation, which makes the first day of the New Year a moveable feast. Observed by Chinese communities worldwide — an estimated 1.3 billion people — the 15-day festival is growing in popularity in Pacific Rim cities such as Vancouver. Fans of astrology take particular delight in the fact that the Shíxiàn calendar is linked to a 12-year cycle of zodiacal animals, and an interest in the attributes that these signs confer on persons born in their given years. This year, for example, is the Year of the Monkey. According to the place mats once universally available in mid-range Chinese restaurants, Monkey persons "are characterized as lively, quick-witted, curious, innovative and mischievous." Today, it seems only right that Reeling Back recall Pu Yi, who was born 110 years ago yesterday (February 7), 13 days into the Year of the Horse. Director Bernardo Bertolucci told his story in 1987's The Last Emperor.

Friday, November 20, 1987.
THE LAST EMPEROR. Co-written by Mark Peploe. Based on the 1964 autobiography From Emperor to Citizen, by Pu Yi with Li Wenda, and 1934's Twilight in the Forbidden City, a memoir by Reginald Fleming Johnson. Music by Ryuichi Sakamoto, David Byrne and Cong Su. Co-written and directed by Bernardo Bertolucci. Running time: 160 minutes. Mature entertainment with the B.C. Classifier's warning: some violence, occasional nudity and very coarse language. HIS LIFE UNREELED LIKE a movie. Crowned China's emperor at the age of three, Pu Yi was heir to the Qing dynasty's Dragon Throne, the absolute ruler and the frustrated prisoner of Peking's Forbidden City.
At 19, he became Mr. Henry Pu Yi. In turn, he sampled life as a jazz age playboy, a puppet prince, a Siberian labour camp inmate, a subject for Chinese communist "re-education," and a citizen gardener.
Bernardo Bertolucci pictured his life as a movie. Indeed, the Italian director has turned Pu Yi's life story into something resembling at least five films, a fascinating 160-minute cinematic compendium called The Last Emperor.
Contained within a Doctor Zhivago-like frame are a basic Cecil B. DeMille epic, a variation on The King and I and  some superb Terry and the Pirates intrigue with an On Golden Pond-style coda. In the process, Bertolucci has produced a popcorn picture that's even more fun than last year's [1986] big China feature, Tai-Pan.
Working from a screenplay co-written with Mark Peploe, he begins the tale in 1950 with a trainload of repatriated "war criminals" arriving on the Chinese side of the Sino-Soviet border. Among them is the bespectacled Pu Yi (John Lone, in a role every bit as impressive as Ben Kingsley's 1982 portrayal of Gandhi).
Knowing that he stands "accused of being a traitor, a collaborator and a counter-revolutionary," the former "Son of Heaven" locks himself in a washroom and attempts suicide. As his blood reddens a basin of water, the movie returns to 1908 to show us, with cast-of-thousands panache, the elevation of the three-year-old Pu Yi (Richard Vuu) to the Dragon Throne.
Saved from death and confined to Fushun Prison, the adult Pu Yi becomes a subject for re-education by the kindly governor Jin Yuan (Ying Ruocheng). A period of enforced self-examination, it provides the filmmaker with a dramatically plausible excuse for the frequent flashbacks that tell us the story of his unique life.
Though best known as the director of such "serious" screen fare as 1973's Last Tango in Paris and Luna (1979), here Bertolucci shows himself to be an accomplished entertainer. He allows Pu Yi's tale to unfold as a series of subtly realized mini-movies.
The arrival of strong-willed English tutor Reginald Fleming Johnston (Peter O'Toole), leads the teenaged Emperor (Wu Tao) into a King and I-like relationship, as well as a realization of his potential for personal power.
The picture's most gripping episodes are played as a Hollywood Second World War adventure drama. Believing in Japan's good will — "Japan has an emperor. We are almost the same age" — the wealthy playboy allows himself to be made head of the puppet state of Manchukuo.
Meanwhile, beautiful, perfidious Eastern Jewel (Maggie Han) has become an ally of Tokyo's spymaster Amakasu Masahiko (Ryuichi Sakamoto). Using a combination of opium and sexual wiles, she corrupts Pu Yi's empress Wan Jung (Joan Chen).
Too late, he realizes that once again he is being used by others to further their wicked ends. Fitting together the bits into an impressive, eye-filling whole, Bertolucci demonstrates a dazzling new ability at popular filmmaking.

Afterword: Nominated for nine Academy Awards, The Last Emperor won them all, including best picture, director and original musical score. With it, Bernardo Bertolucci claimed the distinction of being the first western filmmaker to make a fictional feature film in China since the 1949 communist revolution. The Beijing authorities cooperated to the extent of allowing his Italian crew to shoot scenes within the Forbidden City, providing an estimated 19,000 extras from the ranks of the People's Liberation Army. A self-described Marxist, Bertolucci has never been a Hollywood favourite. Despite two Oscar nominations  — for best screenplay (The Conformist; 1970) and direction (Last Tango in Paris; 1979) — and his Last Emperor wins for screenplay and direction, none of his 16 feature films are American movies. A critic of the Vietnam War, Bertolucci is often quoted as having said: "A monoculture is not only Hollywood, but Americans trying to export democracy. I don't think you can in any way export culture with guns or tanks. I think that I used to love Hollywood movies. I remember great phases and moments. But, unfortunately, now is not the moment."

See also: The distinction of being the first western filmmaker allowed into post-revolutionary China went to National Film Board of Canada director Tony Ianzelo. An exchange program negotiated between two governments resulted in his 1980 documentary features North China Commune and North China Factory.