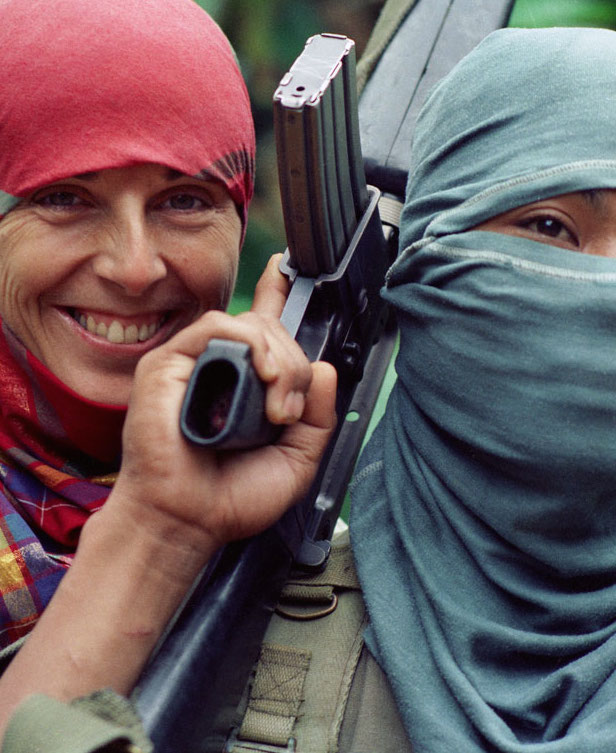 Beyond the news at six


Though press freedom in the Philippines suffered a setback in court today (May 18), the battle remains non-violent. That was not the case when filmmaker Nettie Wild, born on this day in 1952, was there shooting her 1988 feature A Rustling of Leaves: Inside the Philippine Revolution.

A RUSTLING OF LEAVES: INSIDE THE PHILIPPINE REVOLUTION. Music by Joey Ayala and Salvador Ferreras. Written, produced and directed by Nettie Wild. Running time: 110 minutes. A documentary feature exempt from B.C. classification.

FATHER ED DE LA TORRE knows where he stands. An artist, priest and Catholic social activist, he was twice detained by the Marcos government for organizing leftist Christian political groups.
"A democracy must have as many colours as the rainbow,” de la Torre tells Canadian filmmaker Nettie Wild. "We must exorcise the left of its devils, and see it as a human process."
There's little doubt where director Wild stands. Her information-packed, even-tempered documentary A Rustling of Leaves: Inside the Philippine Revolution begins with her telling us that the film records her personal journey of discovery beyond "the six o'clock news."
Over images of cane workers, she introduces us to the history of a land that has been "the perpetual spoils of war,” where [in 1988] 80 percent of the people live below the poverty line. A field worker who cuts a ton of sugar cane a day earns $1 U.S.
In her film, she examines the political dynamic of the post-Marcos Philippines. Under Corazon Aquino, left-wing revolutionaries are faced with the choice of continuing to do battle with government military forces or becoming "legal" and taking part in the formal political process.
Bernabe Buscayno, one of the founders of the communist New People's Army (NPA), chooses party politics, running for office under a socialist party banner. Fr. Frank Navarro remains in the hills, leading a guerrilla unit on the island of Mindanao.
On the radical right is deejay Jun Pala, the host of Mindanao's twice-daily Anti-Communist Crusade broadcast. Allied with the Alsa Masa, a government-supported vigilante movement, he calls down the wrath of God, and the local bully boys, on suspected NPA sympathizers.
During eight months of location shooting, Wild spent time with the Buscayno campaign, in the hills with the NPA and with Pala in his studio. De la Torre provided added perspective from his Manila retreat.
In recent years, I’ve seen some pretty shoddy goods passed off as documentaries. God Rides a Harley, shown here in September [1988], was so desperate to avoid "old-fashioned" narration that it relied on a collage of talking heads, taking at face value whatever they had to say to the camera.
The current Comic Book Confidential is visually slick but utterly superficial. It's obvious that its director knows next to nothing about his subject.
Wild, by refreshing contrast, has a point of view and makes a real case for it. Solid, balanced, and responsible, her film offers analysis and weaves together interviews and actuality footage into a dynamic, persuasive narrative.
A National Film Board of Canada-sponsored documentary, it is neither strident nor dogmatic. The thoroughly professional A Rustling of Leaves offers an honest, challenging portrait of a nation in turmoil.

Afterword: In an article written for Point of View Magazine in 2017, my old Province newspaper colleague David Spaner brings the story pretty much up to date. Nettie Wild, he says, “started out as an actress and her sense of drama and character permeates her documentaries. After graduating from the University of British Columbia (UBC), Wild traveled to the Philippines to perform, only to find herself doing theatre for a barefoot guerrilla army in the mountains. That led to her first feature A Rustling of Leaves: Inside the Philippine Revolution (1988). With funding from Britain’s Channel 4, she returned to the mountains to film the guerrillas and the vigilantes fighting them. ‘We ended up making a film which was very, very difficult on all fronts,’ she remembers. ‘I just about went out of my mind.’ It was nominated for a Genie and won the People’s Choice award at the Berlin International Film Festival.”
(Among the things I did not mention about Wild in my above review were her Vancouver connections. During her UBC years, she was a co-founder of Touchstone Theatre, a company that has become a Canadian performing arts leader, as well as a national treasure. I’m a big fan of its contemporary work, and am indebted to Wild for setting it in motion.)
Spaner’s 2017 career capsule further notes that Wild "continued to redefine notions of 'brave filmmaking,' often stepping into the heart of conflict, with Blockade (1993), A Place Called Chiapas (1998), Fix: The Story of an Addicted City (2002), and KONELĪNE: our land beautiful. A Place Called Chiapas was the first B.C. film to win a Genie for best documentary feature . . . Wild’s films have spurred debates on issues, but she’s taking a different tack with her latest, KONELĪNE, a luminous look at the character of northwestern B.C.”
And not just brave, but fearless. In an article written for Point of View Magazine in 2016, Vivian Belik reports that during the time Wild spent “teaching street theatre to communist guerrilla fighters in the Philippines . .  . she and her group were bombed by government forces for four days straight.” That was when she “decided to make her first documentary about the fighters’ struggle and it resulted in the award-winning film, A Rustling of Leaves.”  Co-founder (with Betsy Carson) of Vancouver-based Canada Wild Productions, Nettie Wild turns 68 today (May 18).