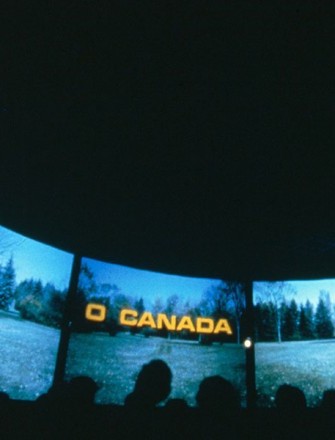 
Surrounding us with natural beauty


The 32nd item in Reeling Back's 38-part series recalling the cinema of Vancouver's Expo 86 reviews Portraits of Canada, the Circle-Vision 360 movie produced by Walt Disney and presented in the Telecom Canada pavilion.

AT MONTREAL'S EXPO 67, the idea was new. Called Circle-Vision 360, it surrounded an audience with movie screens — there were nine of them separated by just enough room for projector ports — upon which appeared an enveloping spectacle.
The process was developed by the Walt Disney Studios, and its first production was the centennial travelogue Canada  67. The film, sponsored by the nation's telephone companies, was exciting, patriotic and one of the Montréal fair’s biggest crowd pleasers.
For our Expo 86, the idea has been labelled “new and improved.” Rather than mess with proven success, Telecom Canada commissioned another Circle-Vision production for its corporate pavilion here.
This time, though, the technology is being nudged in the direction of narrative. Portraits of Canada, directed for Disney by Ottawa-born Jeff Blyth, contains 12 story “vignettes,” each set in a different geographical  region.
The story mix does little for Canada’s self-esteem as a developed nation. Of the 12 episodes, five are set in wilderness  areas, and five more were shot on rural locations. Only two — a backstage look at Toronto’s National Ballet and a romantic interlude in Québec City’s picturesque Old Town — could be considered urban.
Visual effectiveness is quite another thing. Much of the footage, shot by Vancouver cinematographer Bob Innis, is breathtaking. At least one of the mini-dramas, the story of a prairie Christmas, brought a tear to my eye.
Able to accommodate 1,200 fairgoers for each 20-minute performance,   Telecom’s stand-up theatre offers a quaint, homely view of the Great White North. When Expo ends, the film will begin an open-ended engagement at the EPCOT Centre’s Canadian Pavilion in Florida’s Disney World.

Afterword: As it turned out, Canada 67 was not Disney’s first film designed for viewing in the round. I later discovered that the ever-inventive Walt Disney had produced his first full-circle film in 1955. (For more on that bit of movie history, read the Afterword to my earlier feature piece on Expo 86 In the Circle.) I also learned that Disney had called upon Calgary-born Robert Barclay to direct his 22-minute Expo 67 attraction. Barclay, a National Film Board documentarist, spent nine months filming scenes across Canada.
Updating my 1986 feature on Portraits of Canada proved more challenging. Looking at my file copy of the official Expo 86 Information Manual — issued to the press seven weeks ahead of the fair’s opening day — I discovered that Disney’s picture had been produced and directed by “Jess Blythe,” an “Ottawa-born Canadian.” As his credit on the film itself read “Jeff Blyth,” that was the name I used in the above story. Even so, it made sense that, as in 1967, the studio had gone with a Canadian director. So, I kept "Ottawa-born" in the story. In 2016, surprisingly, I cannot corroborate that simple fact. None of the usual online sources include a birth place (or date) for the Portraits of Canada director.
In a 2012 interview with Gavin Midgley on the Take One website, Blyth mentions his “early career in Michigan,” and moving “to California in the mid-70s.” There, his first job was as a production manager for IMAX moviemaker MacGillivray-Freeman Films. His first directorial assignment for Disney was the 1982 Circle-Vision 360 short Wonders of China, produced for the company’s theme parks. After Portraits of Canada, he made his feature film debut with Cheetah, a 1989 Disney adventure set in Kenya that told the story of two American teens who save a jungle cat from poachers. In the mid-1990s, Blyth directed three episodes of Space Cases, a sci-fi fantasy series produced for the Nickelodeon cable network. The fact that the Montréal-based show was a Canadian production is a bit of circumstantial evidence for Blyth as an expat still connected to the Great White North.

See also: The eight articles included in this, the fourth of four Expo 86 special reports, explore the pavilions of: