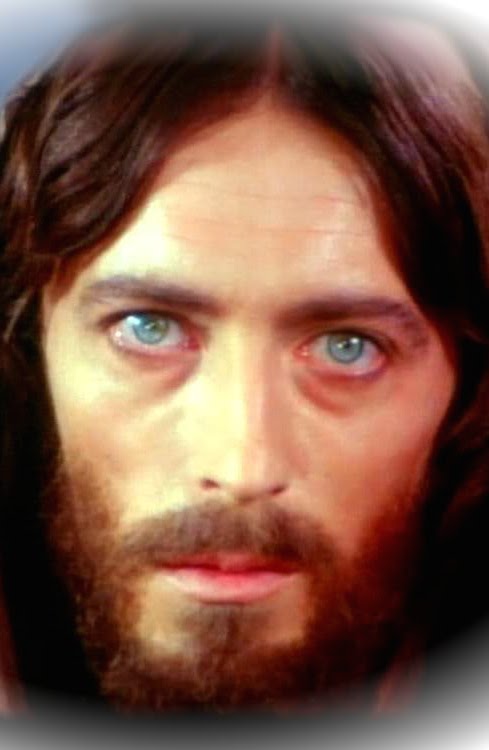 Footage from director Franco Zeffirelli’s Jesus of Nazareth, in which actor Robert Powell played a green-eyed Christ, was featured in The Scroll, seen at Expo 86’s Pavilion of Promise.


The 34th item in Reeling Back's 38-part series recalling the cinema of Vancouver's Expo 86 contrasts two movies, one examining Islam and The Scroll, a look at Christianity. The films were on view at the pavilion of Saudi Arabia and Promise.

JESUS LOOKS FAMILIAR. So, too, the Prophet Mohammad’s army as it advances on Mecca.
Religion, that most personal expression of ethics and belief, is the subject of sincerely-intended entertainments at two Expo 86 pavilions. In developing their themes, both draw upon recent motion pictures for relevant imagery.
In a compact, mosque-like theatre, The Kingdom of Saudi Arabia offers a brief examination of Islam. A sober, reverent audio-visual presentation, the Saudi pavilion’s show incorporates material originally shot for director Moustapha Akkad’s 1976 theatrical feature Mohammad, Messenger of God.
Footage from Franco Zeffirelli’s 1977 TV mini-series Jesus of Nazareth is used in The Scroll, the 40-minute multi-media program at the Pavilion of Promise. Sponsored by Crossroads Christian Communication Inc., it is an extension of David Mainse’s 100 Huntley Street television ministry.
Produced by Czechoslovakia’s Radúz Činčera, the three-theatre presentation uses high tech to give fairgoers impressions of the Creation, the Life of Christ, and Eternity. Each of the auditoriums seats about 100 spectators, all of whom wear earphones to hear Bruce Stacey’s original score and Malcolm Muggeridge’s narration.
Creation is viewed from above. Live dancers, representing Adam and Eve, are combined with images projected on a floor-screen and extended by the mirrored walls.
The second theatre surrounds its visitors on three sides with mirrors that reflect scenes edited from the Zeffirelli film. The third is dominated by a circular screen reiterating images from the first theatre, multiplying them with mirrors and enhancing their effect with smoke and laser lightning bolts.
Spirituality is, of course, in the heart of the beholder. For me, composer Stacey’s soft-rock liturgical music evoked memories of the sincere, somewhat sappy campus Catholicism of the early 1960s, an era  of folk masses and ecumenism.
The sight of a green-eyed Jesus (actor Robert Powell) and a blue-eyed John the Baptist (Michael York) turned my thoughts from the eternal mystery to show-business mechanics. Satirical songwriter Tom Lehrer’s classic Vatican Rag came to mind.
There’s no denying the importance of religious feelings, or the need to communicate them to others. I only wish that Reverend Mainse’s presentation felt less like a sideshow.

Afterword: Restoring the above review, I found myself remembering the advice Linus van Pelt once offered his friend Charlie Brown: “There are three things I have learned never to discuss with people . . . religion, politics, and the Great Pumpkin.” The fact that the two Expo 86 pavilions that insisted on putting religion front and centre chose to use footage from commercial motion pictures made my job a lot easier. The last thing a daily newspaper wants to do is challenge the core values of its readers. Since I was pretty sure that my readers weren’t going to the world’s fair in search of a religious experience, I deliberately avoided the camel in the room — the fact that both pavilions represented the fundamentalist fringe of their respective Abrahamic faiths.
Saudi Arabia takes its name from its ruling family, the descendants of Muhammad bin Saud, who, together with Muhammad ibn Abd al-Wahhab, founded the Wahhabi movement of the mid-18th century. Their modern kingdom, founded in 1932, takes up most of the Arabian peninsula, a 3.24 million-square km (1.25 million-square mile) subcontinent between the Red Sea and the Persian Gulf. Included in its territory is the holy city of Mecca, the required destination of the Hajj pilgrimage, which is one of the five pillars of Sunni Islam. Practicing Muslims have a duty to complete a trip to the holy site in their lifetimes.
Highlighting Islam at Expo was a tacit acknowledgement of the importance of the Hajj to the Saudi economy. Today, it is the kingdom’s greatest source of revenue after gas and oil extraction, and is becoming more important as that industry declines. In 1986, I did not mention the irony involved in the Saudi use of the Syrian-American Moustapha Akkad’s feature film Mohammad, Messenger of God. Cinema is considered contrary to Wahhabi norms and, at the time of our Vancouver Expo, there were no movie houses in Saudi Arabia. (Today there is one: an IMAX Dome at the Science and Technology Centre in Khobar, not far from the U.S. air base.) Wahhabism is a fundamentalist movement, and today is the driving ideology of such organizations as the Taliban in Afghanistan, Al-Qaeda and the Islamic State of Iraq and the Levant (ISIL).
Christian fundamentalism, the Protestant version of Wahhabism, seems less threatening because of its almost folksy familiarity. It still preaches a gospel of hardcore intolerance, one that opposes a woman’s right to choose, and demonizes gays. Often referred to as the “religious right,” its leaders continue to wield enormous power in the U.S. and Canadian political systems. Launched in 1977, Crossroads Christian Communication’s flagship show, 100 Huntley Street, airs daily on the Ontario-based Yes TV cable network.

See also: The eight articles included in this, the fourth of four Expo 86 special reports, explore the pavilions of: