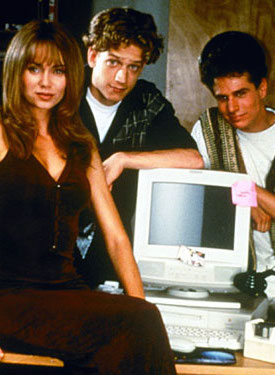 
In his landmark lecture The Two Cultures, Britain’s C.P. Snow lamented the gulf between scientists and literary intellectuals. Just think what Snow, born on this day (October 15) in 1905, might have said about writer-director John Hughes’s 1985 comedy Weird Science.

WEIRD SCIENCE. Music by Ira Newborn. Written and directed by John Hughes. Running time: 92 minutes. Mature entertainment with the B.C. Classifier's warning: some coarse and suggestive language, occasional nudity. HELLO. THANK YOU FOR calling DIAL-A-PLOT, the computerized script-consultation service that provides recorded advice for busy young filmmakers in a hurry for a hit. Planning a picture today is a lot like preparing for a wedding. You need something borrowed . . . something borrowed . . . something borrowed . . .
Writer-director John Hughes admits that he was in a hurry. Though he was hard at work on the screenplay for Weird Science, he had to set it aside to direct another feature, The Breakfast Club.
“I was still editing Breakfast Club when we had a start date on Weird Science,” he tells us in the current film's press notes. “In order to make a summer (1985) release date, we had to start in the fall (1984) so I was in the position of having to edit one film and shoot another.”
In his haste, Hughes produced a picture that is more of a Weird Fantasy. Returning to the north Chicago suburbs where he shot both 1984’s Sixteen Candles and The Breakfast Club, he has done little more than add to the glut of teenage sexual-obsession comedies.
Gary Wallace (Anthony Michael Hall), 16, and Wyatt Donnelly (Ilan Mitchell-Smith), 15, are nerds. They pine after class beauties Deb (Suzanne Snyder) and Hilly (Judie Aronson), who prefer to spend their time with class bullies Ian (Robert Downey) and Max (Robert Rusler)
Left alone in the Donnelly home for the weekend, the nerds tune into a computer-colourized telecast of  1935’s The Bride of Frankenstein, and are inspired to construct a woman of their very own.
Using Wyatt's PC, they order up something physically attractive and sexually aggressive. There is an explosion and, to their shock and delight, the hard copy that emerges is slinky Kelly (The Woman in Red) LeBrock.
"You made me,” she purrs.
“You control me.”
A genie attuned to their innermost needs, she provides them with stylish clothing, fast cars and false IDs. all in a magical crackle of electric blue flame.
In a hurry for an idea, Hughes borrowed the plot of a real hit, writer-director Paul Brickman’s Risky Business (1983). Instead of a streetwise strumpet, he conjured up a silicon-chip superwoman to take charge of the backward boys' social education.
Unfortunately, he was in too much of a hurry. The sweetness that was obvious in his Sixteen Candles and the skillful interplay of characters that distinguished The Breakfast Club are missing here.
In their place, Weird Science offers only a lot of adolescent heavy breathing, underscored by a collection of excessive special effects. The picture's half dozen laughs hardly justify such a lavish effort.

Afterword: In our tech-savvy world, it's hard to imagine a time when the study of the humanities (including the Latin and Greek languages) was considered superior to scientific inquiry. That was a very real issue when Charles Percy Snow delivered his 1959 Rede lecture, The Two Cultures and the Scientific Revolution.
A trained physicist who was also a successful novelist, Snow criticized a British educational and social class system that made such distinctions possible. In doing so, he set off a discussion that may well have come full circle.
In its own oddball way, Weird Science's magic show was part of that conversation. John Hughes's hormone-driven comedy was built on the class distinctions present in the suburban American high school system of its day. Its sympathy for the socially inept nerds — also known as geeks — was part of a directional shift in the popular culture that began with director Jeff Kanew’s 1984 college comedy Revenge of the Nerds (although the trend was effectively foreshadowed by director Bob Clark’s 1981 Canadian-financed feature Porky’s.)  We can only guess what C.P. Snow, who died in 1980 at the age of 74, would have made of Hollywood’s take on his insights. It’s reasonable to assume, though, that he’d approve of the respect that today’s world accords such accomplished nerds as Bill Gates, Elon Musk, Jeff Bezos and Mark Zuckerberg,

See also: Films in the Reeling Back archive directed by John Hughes include 1987’s Planes, Trains and Automobiles. Among the movies written by Hughes for other directors are 1990’s Home Alone and Dennis the Menace (1993).