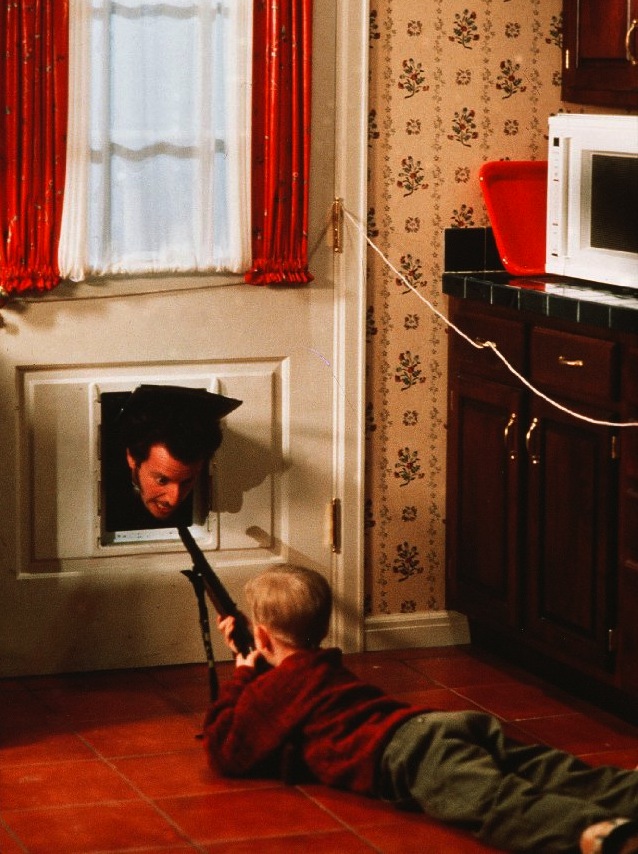 Christmas burglar Marvin (Daniel Stern) discovers that the Home Alone Kevin McCallister (Macaulay Culkin) is prepared to shoot his eye out in defence of the family manse.


On the ninth day before Christmas, my TV gave to me . . . Continuing with a list of movies, checked over twice, containing titles both not-my-cup-of-tea and nice. I've chosen an even dozen from the pool of productions endlessly rebroadcast during our ever longer Yuletide. Today (Dec. 16), following on from Black Christmas with its seasonal house-of-horrors theme, Reeling Back offers 1990's Home Alone. You may wish to click the Read More button now, though, as I'm going to take time out to repeat my holiday rant. Although I don't buy any of the "war on Christmas" nonsense peddled by the Fox and Sun news networks, I do regret the front loading of the season at the expense of the traditional 12 Days of Christmas. The modern mercantile version of the season-to-be-jolly has repositioned December 25, making what was once the First Day of Christmas, the last. Thereafter, it's on to the "after-Christmas" sales. What's been lost is the winter solstice moment, that midwinter festival recognizing the rebirth of the land that comes after the year's longest night. It lasts until Twelfth Night (Jan. 5) and makes good sense regardless of your religious beliefs. It also comes closer to my idea of a merry Christmas.

Friday, November 16, 1990
HOME ALONE. Written and produced by John Hughes. Music by John Williams. Directed by Chris Columbus. Running time: 103 minutes. Mature entertainment with the B.C. CIassifier's warning: occasional violence. IT'S QUIET. Too quiet.
"Is this a joke?" eight-year-old Kevin McCallister (Macaulay Culkin) says to the unnaturally silent house.
Last night, the McCallister family's suburban Winnetka, Illinois, home was bursting at the seams with people. Siblings, cousins, parents and in-laws were making panicked preparations for an early morning Christmas flight to Paris, France.
Kevin, after disgracing himself at the evening's pizza party, was banished to the attic. "I wish they would all just disappear," he'd said to his mom (Catherine O'Hara).
And now they have. "Is this a joke?'' Kevin says again, realizing that he's Home Alone.
It's supposed to be funny.
Conceived by screenwriting machine John Hughes, Home Alone is the story of a kid accidentally abandoned by his family, his encounter with a pair of determined burglars and his mother's desperate efforts to get home to him.
Straw Dogs — well, maybe Straw Puppies — meets Planes, Trains and Automobiles. Donning his producer's hat, Hughes handed off directorial duties to Chris Columbus, the young automaton responsible for such overstated efforts as Adventures in Babysitting (1987) and Heartbreak Hotel (1988).
"I wanted to do a Christmas film," says Columbus, who made his own screenwriting debut with Gremlins (1984), a chaos fantasy with a Yuletide setting.
Between them, they've manufactured a feature with all the warmth of a Chicago winter. Hughes, no longer to be relied upon for comic concepts, takes an unlikely situation and turns it into an irresponsible exercise in kiddie Guignol.
To provide suspense, he introduces Harry Lyme (Joe Pesci) and Marvin (Daniel Stern), a pair of imbecilic housebreakers who've targeted the McCallister's wealthy neighbourhood. Realizing that they are on the way, Kevin turns himself into a tiny terrorist.
"This is my house," the child says with Rambo-like resolution. "I have to defend it!"
To do so, he sets a series of traps that carry Home Alone beyond knockabout comedy into shock-horror territory. Presented as "jokes" are a selection of calculated cruelties, any one of which would leave an ordinary person hopelessly crippled.
The movie-makers, no doubt, would argue that the various falls, cuts, shocks and blows suffered by the hapless villains are merely cartoon violence and examples of Three Stooges-style mayhem humour.
Indeed, the producers may have the opportunity to argue their flakey film theories when the personal injury suits start rolling in.
Classic slapstick rarely invited eight-year-olds to set "funny" deadly traps for "funny" menacing adults.
Home Alone, by contrast, offers little kids a genuine incitement to domestic violence.
Director Columbus, a film school grad who demonstrates neither authentic feeling nor a personal vision, cranks it all out with mechanical efficiency. Unlike Bob Clark (whose 1983 comedy A Christmas Story is a seasonal classic), Columbus creates little more than a meretricious misfire.
A goofball who deserves to end up making Friday the 13th sequels, Columbus's "family" picture is unsuitable for impressionable children or tasteful adults.

Afterword: Despite my misgivings, Home Alone does not appear to have inspired any landmark lawsuits (although I'm willing to bet that the state legislators who crafted all those "stand-your-ground" laws in the U.S. are big fans of the film). It did, however, become the top grossing film of 1990. Naturally, its studio ordered up a sequel (1994's Home Alone 2: Lost in New York) that reunited writer John Hughes with director Chris Columbus. A member of a generation of writer/directors who went directly from film school into the movie industry, Columbus had little actual life experience to draw upon, with the result that his movies tend to reflect his response to previous movies. His first produced screenplay, 1984's Reckless, recycled bad-boy themes borrowed from The Wild One (1953) and Rebel Without a Cause (1955). His second, 1984's Gremlins, was a dark take on the iconic Christmas movie It's a Wonderful Life (1946). While his later work — including the first and second pictures in the Harry Potter  series — would cement his reputation as a hit-maker, Columbus remains a tradesman, the sort of reliable film-factory worker that no one would ever mistake for an artist.
Christmas Countdown:  Mixed Nuts (1994); Black Christmas (1974); The Ref (1994); Santa Claus - The Movie (1985); Prancer (1989); One Magic Christmas (1985); Nobody's Fool (1994); Gremlins (1984); Scrooged (1988); A Christmas Story (1983); Die Hard (1988).