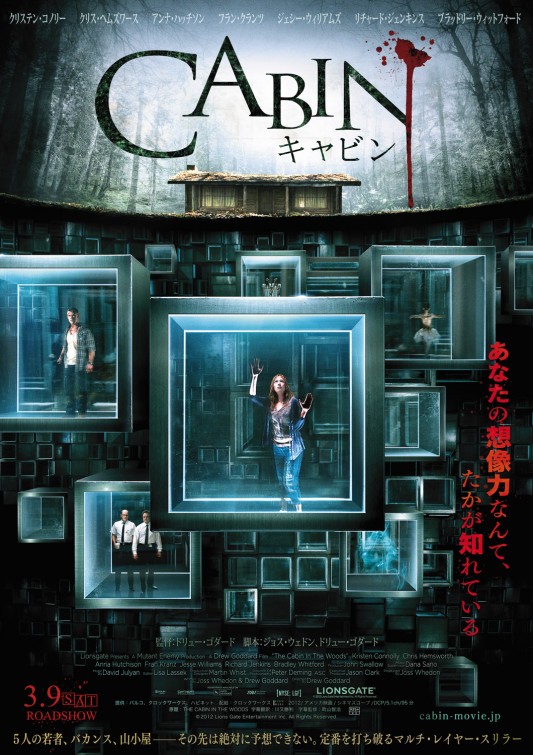 C Is For Compendium


The search for the perfect forest brought horror movie fans Joss Whedon and Drew Goddard to Vancouver, where they stayed to make their own stylish contribution to the fright film genre, The Cabin in the Woods.

Friday, April 13, 2012
THE CABIN IN THE WOODS. Music by David Julyan. Co-written and produced by Joss Whedon. Co-written and directed by Drew Goddard. Running time: 95 minutes. Rated 18A with the B.C. Classifier's warning: explicit violence.

"If you give away the plot of this film to someone who hasn't seen it, I will personally come to your house and make fun of you in front of people you respect."
— Joss Whedon

THE MAN HAS A WAY with words. Joss Whedon, the third-generation television writer who gave the world Buffy the Vampire Slayer, has a genuine love of genre and a talent for mockery.
Both are on display in The Cabin in the Woods, the see-worthy feature film he co-wrote with debuting director Drew Goddard. In Whedon's own words, the picture is "a serious critique of what we love and what we don’t about horror movies.
"I love being scared," he said in a recent interview. "I love that mixture of thrill, of horror, that objectification/identification thing of wanting definitely for the people to be all right, but at the same time hoping they’ll go somewhere dark and face something awful.
"The things that I don’t like are kids acting like idiots, the devolution of the horror movie into 'torture porn' and into a long series of sadistic comeuppances. Drew and I both felt that the pendulum had swung a little too far in that direction."
"Torture porn," a phrase coined by New York Magazine critic David Edelstein to describe the 2005 gore-fest Hostel, is often applied to the Saw series (2004-2010). Cabin, the Whedon/Goddard critique, invites moviegoers into a funhouse film that pays tribute to some 40 years of horror history, a program brought to you by the Letter C.
Cabin’s opening shot is an homage to the American (International) shockmaster Roger Corman. A surface alive with psychedelic shapes, the screen throbs with blood-red blobs adorned with bits of artwork: a pen-and-ink sketch that just might be Abraham sacrificing Isaac, another that could be an Aztec ritual murder and yet another offering what appears to be a full-colour detail from a Bosch image of hell.
The action begins with a scene set in an office lunchroom. Standing by a vending machine, a pair of older white-collar workers are bantering about personal health issues. It's not really clear, but Richard Sitterson (Richard Jenkins), the senior supervisor, seems to be twitting his colleague Steve Hadley (Bradley Whitford) about visiting a fertility clinic.
As it turns out, the actual issue is of no importance to the plot, serving only to establish the men's camaraderie and their physical setting, a modern building that could be anything from a corporate headquarters to a government bunker. The nod is to the 1970s, Michael Crichton and the science-fictional horrors of his Westworld, Coma and Looker.
A quick cut (by editor Lisa Lassek, the VCON 36 media guest of honour) sends us into another movie entirely, one in which the camera is hovering outside the window of a cozy apartment building on a tree-lined street. In a voyeuristic moment reminiscent of 1980s slasher films, our attention is focused on coed Dana Polk (Kristen Connolly), a redheaded beauty bustling about her room in a blouse and panties.
Films such as John Carpenter's Halloween, Sean S. Cunningham's Friday the 13th and Wes Craven's Nightmare on Elm Street all morphed into franchises in which erring teens faced off against indestructible serial killers.
The Cabin in the Woods appears headed in the same direction, as Dana is joined by saucy blonde Jules Louden (Anna Hutchison), bespectacled Holden McCrea (Jesse Williams), jock Curt Vaughan (Chris Hemsworth) and stoner Marty Mikalski (Fran Kranz).
Together, they're off for a weekend "off the grid" at the cabin of the title. As their RV disappears up the street, the camera pans up to the apartment block’s roof, where a lurking observer reports "the nest is empty. We're right on schedule."
In 1992, Joss Whedon's screenplay for Buffy the Vampire Slayer combined humour and horror. The final result, directed by Fran Rubel Kuzui, seriously disappointed its writer, who went on to re-imagine it as a television series. The show went to air in 1996, the same year that Wes Craven successfully combined horror and humour in the first film of the Scream series.
Twenty years on, Whedon has become famous for capturing the pop-cultural moment, an ability he's nurtured in such Buffy-bred television writers as Marti Noxon (Mad Men; Glee), Jane Espenson (Warehouse 13; Once Upon a Time), David Fury (Lost; Fringe), David Greenwalt (Eureka; Grimm) and Drew Goddard (Alias; Lost).
Goddard, of course, wrote 2008’s Cloverfield, the Godzilla-inspired monster movie in which the monster is more McGuffin than principal player. Who better then, to help Whedon connect the dots between eldritch abominations and our surveillance society, make book on a zombie redneck torture family and realize the deadly possibilities inherent in unicorn horns?
With The Cabin in the Woods, they create a vision of today that makes it a must-see for all (Post Apocalypse-themed) VCON 37 members. And, if that's too much of a plot spoiler, I'll look forward to Mr. Whedon's verbally-abusive visit.

The above is a restored version of a VCON 37 website review by Michael Walsh originally published in 2012. For additional information on this archived material, please visit my FAQ.

Afterword: Joss Whedon had the opportunity of working with Chris Hemsworth again following the young Australian's appearance in the 2011 feature Thor, when that character joined the cast of superheroes he assembled for 2012's The Avengers. Whedon called upon Amy Acker, Fran Kranz and Tom Lenk that same year to appear in his adaptation of Shakespeare's Much Ado About Nothing.