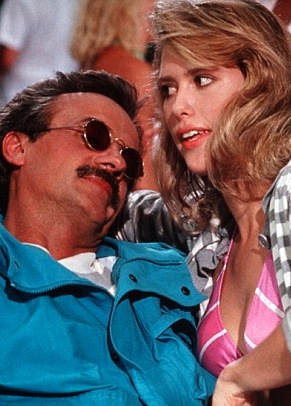 
Today (April 22), Reeling Back celebrates Earth Day, first held in 1970, and actress Catherine Mary Stewart, born on this day in 1959. Congratulations are due the U.S. and China for signing the Paris Agreement, and to Stewart, who survived director Ted Kotcheff's Weekend at Bernie's.

Friday, July 7, 1989.
WEEKEND AT BERNIE'S. Written by Robert Klane. Music by Andy Summers. Directed by Ted Kotcheff. Running time: 97 minutes. Mature entertainment with the B.C. Classifier's warning: occasional coarse language and swearing. BERNIE (TERRY KISER) IS the life of the party. Sitting in his palatial living room, wide-open eyes hidden behind dark glasses, the New York executive holds silent court.
A legendary good-times place, Bernie Lomax's Hampton beach house is full of friends this blisteringly hot Labour Day weekend. Relaxed and serene, Bernie greets one and all with a slightly conspiratorial, Mona Lisa smile.
Less relaxed are Bernie's young house guests, Richard Parker (Jonathan Silverman) and Larry Wilson (Andrew McCarthy). Earlier in the week, they discovered a $2-million error in the Trans Allied Insurance Company's records, an error they reported to their high-living boss.
Earlier today, they arrived at his island summer home expecting their reward, a fun-filled Weekend at Bernie's.
Their host, unfortunately, is past partying.
Bernie is dead.
Unlike the boys, the audience knows what happened. To cover up his involvement in the missing money matter, Bernie put out a contract on the boys with his favourite godfather, Vito (Louis Giambalvo).
Vito agrees but, sensitive about respect, he takes it amiss that Bernie is having an affair with his own special woman, Tina (Catherine Parks). Vito tells Paulie (Don Calfa), his faithful hitman, to forget the kids and snuff Bernie.
Discovering that their boss is dead, responsible Richard is for calling the cops. Larry, on the other hand, still wants some fun.
"I've got an idea," says mischievous Larry. ". . . Why don't we pretend he didn't die, just for a bit?"
An interesting question, full of Gallic resonance.
Wasn't there a French comedy a few years back called Two Men and a Body . . . ?
But, non. New York screenwriter Robert Klane, whose The Man With One Red Shoe (1985) was a remake of Yves Robert's Le grand blond avec une chaussure noire (1972), says that he "started this screenplay 18 years ago."
Victor Drai, the new film's producer, once saw his French films Pardon mon affaire and Le grand blond avec une chaussure noire remade in English. Drai is now based in the U.S.
Even so, their Bernie looks like the sort of picture that the French make for practice. An exercise in mild outrageousness, it's a one-joke feature, an attempt to milk an unsympathetic character's demise for as many groans as possible.
Perhaps it was meant as a tribute to Hitchcock's classic black comedy The Trouble with Harry (1955), a marvellously piquant tale of an unexpected corpse. Unfortunately, Klane's plotting has more in common with a Carry On comedy, relying on situational gross-outs rather than character development.
Director Ted Kotcheff, whose thoughtful, underrated Winter People slipped through town earlier this year [1989], does his best with Klane's underdeveloped material.
Actor Kiser, playing a corpse for most of the film, makes a strong bid for best supported player honours. Among the living, Catherine Mary Stewart (as Richard's lovely if clueless girlfriend Gwen) and Catherine Parks (as Bernie's quick-tempered mistress Tina) create enough plot complications to stretch this weak comic brew to feature length.

Afterword: Torontonian Ted Kotcheff, director of 1974's The Apprenticeship of Duddy Kravitz and Edmonton-born Catherine Mary Stewart provided the quirky Weekend at Bernie's a measure of Canadian content. No stranger to oddball screen involvements, Stewart made her feature film debut playing a Moose Jaw hippie named Bibi, the starring role in a British science-fantasy musical that was set in the U.S. but shot in West Germany by Menahem Golan, its Israeli writer/producer/director.The Apple, released in 1980, was a religious allegory, a disco-inflected homage to Norman Jewison's Jesus Christ Superstar,  in which Satan got all the best lines. Almost immediately afterwards, Stewart landed her second star credit, playing ski bunny Belinda in the Canadian tax-shelter feature Powder Heads (1980), shot in her hometown and on the Jasper National Park's ski slopes. Her third screen appearance was a supporting part in a Hollywood feature, the Sylvester Stallone thriller Nighthawks (1981).
Stewart's two 1984 features, a supporting role as the hero's loyal girlfriend in The Last Starfighter (1984) and the take-charge Regina Belmont, the undisputed star in Night of the Comet, established her as an international science-fiction icon. Thereafter, she's had steady work in movies and on television, often in genre projects. Stewart has made four working visits to Vancouver, the first to take a role in director Rex Bromfield's 1991 independent feature drama Cafe Romeo. She co-starred with Charles Bronson in the 1993 TV-movie adaptation of The Sea Wolf, and was back in 1996 and 2001 to star in episodes of The Outer Limits television series. Stewart turns 57 today (April 22).
Born Catherine Mary Nursall, Stewart has an older brother with a direct connection to today's Earth Day observances. The president and CEO of the Telus World of Science in Edmonton, Alberta, Alan Nursall is a meteorologist and former television science reporter. The science centre he now runs is taking part in the worldwide Earth Day event by sponsoring a contest linked to its current IMAX theatre attraction, Watermelon Magic.